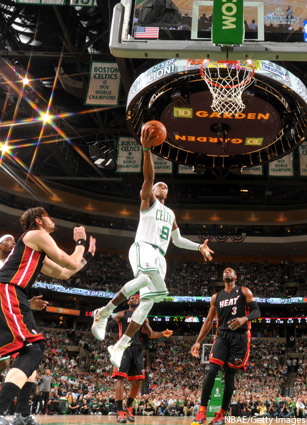 You could say the Boston Celtics did enough to win, or the Miami Heat did just enough to lose. You could (accurately) say, had LeBron James not fouled out for only the fifth time in his career, or Dwayne Wade not missed an uncontested shot at the buzzer, this morning’s Post Up would be more of an obituary than a recap. You could say that the first quarter of Game 4 was proof the ‘12 Celts still have a bunch of ‘08 in them, or you could degrade that same blazing-hot start into an aberration, or some sort of “luck”; that if it weren’t for a such a quick deficit within the first seven minutes, Miami wouldn’t have had to use the next 32 to play catch-up, and would’ve instead cruised to a victory. You could say whatever you want, but regardless of what comes out of your mouth, the fact is this: The battle-tested, irreverent, imagine we cared what you think Celtics are two wins away from the NBA Finals.

For the second time in five days, Miami and Boston needed overtime to settle the score. This time, however, using sound crunch-time defense and a small dose of good fortune, the Celtics emerged from the debris of an Eastern Conference Finals dog-fight with a 93-91 victory, taking their talents to South Beach on the highest possible note and setting up a best-of-3 series.

For the boys in black, LeBron James poured in 29 points and 6 rebounds, Dwyane Wade posted a 20-7-6 line, and Udonis Haslem had a valiant, savage-like 12 points and 17 rebounds in the losing effort.

The Celtics started off so hot so quickly that you would think it was some sort of joke. They made 16 of their first 25 shots, experimenting and toying with Miami’s defense as if they were running three-man weaves in practice. Before your eyes could even settle, Boston was up 14-4. Two KG buckets in a row and it was 18-4. A Paul Pierce three-pointer and it was 21-6. Miami eventually found some semblance of a groove to keep the game within reach, but the Celtics shot 59 percent in the opening fame to command a 34-23 advantage.

Boston went up by as much as 18 the second, and led 61-47 at the break. Their catalyst, of course, was Rondo, who orchestrated an 8-point, 10-assist, 4-rebound and zero-turnover first half.

But, in what has become as expected as anything else in sports, the Heat came out in third quarter hell-bent on dominating, unconcerned with and oblivious to any first half struggles. Suffocating defense, coupled with Rondo picking up his fourth foul, led to Boston scoring only 12 points in the frame (21-12), and the Celtics barely held onto a 73-68 heading into the fourth.

In a gritty, back-and-forth fourth quarter, both teams dug deep into their vault to find any advantage they could. For the Heat, rookie Norris Cole came through, stymieing Rondo for a stretch and converting on much-needed baskets. After LeBron finished a layup to tie it at 74-all with 8:54 remaining in regulation, Cole followed it up with his first field goal of the series, a layup to give Miami its first lead of the night.

With the Celtics down two, Pierce and Rondo made consecutive layups to regain an 85-83 lead with 3:08 left in the fourth. And with less than a minute remaining and the C’s up three, it was gut-check time for the Heat. Right on cue, LeBron found himself wide-open for a 3-pointer, and poof, he drained it to tie things up at 89 with 37.5 seconds left.

On the next possession, KG was called for an offensive foul while tangling with LeBron in the paint, giving Miami the ball back and a chance to steal the game. The Heat had 21 seconds to do so, but a triple-teamed LeBron found a covered Udonis Haslem, who threw up a weird turn-around shot that was well off the mark. 89-89, overtime.

With a little help from the officials, the Heat struck first in the extra session, as Paul Pierce was whistled for an offensive foul merely 38 seconds in, marking his sixth of the game and effectively ending his night. Miami followed that up a minute later, when Haslem threw down a thunderous dunk for the first basket of overtime.

But Marquis Daniels, aka Q6, converted on a free throw, and Rondo hit a teardrop to give the Celtics a 92-91 edge. Then, with 1:51 remaining, the Celtics got their own help from the officials, as LeBron was whistled for an off-ball offensive foul, his sixth of the game as well. Just like that, Pierce and LeBron were both gone with the game up for grabs. A couple of misses later, with an intermittent Rondo free throw, Boston was up two with 21 seconds left.

On the last possession of the game, Wade sized up Daniels on the right side of the court, used a quick right-to-left crossover to create some space, pump-faked to get Q6 in the air, and launched a fadeaway three at the buzzer… No good.

The series now heads back to Miami tied up 2-2. Game 5 is tomorrow night, and you can bet the Heat will come out pissed off  and determined to restore order. Boston will have to play sound, mistake-free basketball, as they leave their raucous home crowd behind them. To get a win in South Beach—which is a prerequisite to winning the series—the Celtics will need to muster up a near-perfect effort. They almost had one in Game 2, but as we saw, even Rondo’s 44, 10 and 8 was no consolation.

We’ve got a series on our hands, folks. Let the increased physicality, animosity and captivation ensue.