Klay Thompson explodes for 40 vs. the Sixers, DeAndre Jordan dominates the Nuggets and more from Sunday. 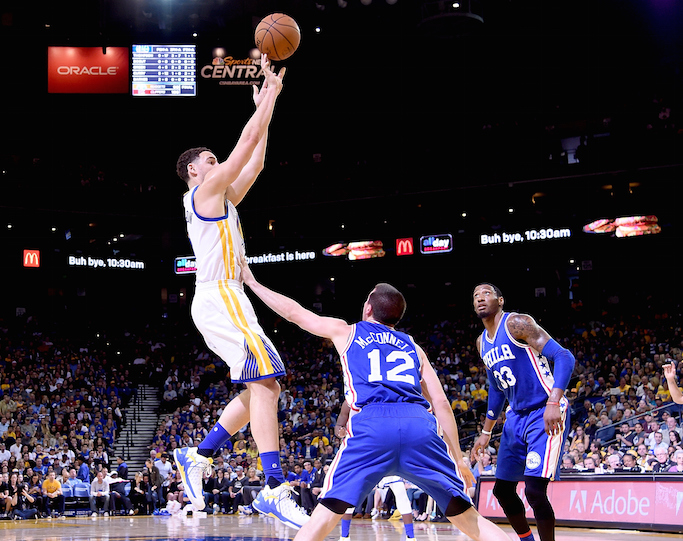 The Clippers became the fourth Western Conference team to punch a playoff ticket, officially, by beating the Nuggets behind 16 and 16 from DeAndre Jordan in 29 minutes. DJ was also swatting the hell out of Denver at the rim, finishing with six blocks. The Clippers as a team had a season-high 11 blocks. Meanwhile the Nuggets’ starters combined for just 28 points.

James Harden finished with 34 points, 8 rebounds and 8 assists, but it wasn’t enough. Paul George started the game hot (16 of his 25 points in the first quarter) and Ian Mahinmi scored a career-high 19. Monta Ellis (23 points) put the Pacers up with just under 5 minutes to go and they hung on for the win.

After a career-high scoring effort on Friday night against Phoenix, Willie Cauley-Stein went for 20+ points again, finishing with 21 and 7 rebounds. DMC racked up 20 and 12 to help beat the Mavs, who are a half-game back of the 8-seed in the West (behind the Rockets). The Kings have been very trainwreck-y this season, but you can’t say they aren’t entertaining. After this one there was Boogie:

And then there was Rondo:

Rajon Rondo said he wants the Mavs to get their "plane ticket" for the offseason the same day the Kings do.

Coming in, this was the biggest difference in winning percentage for two teams in a regular season game in the history of the NBA. And yeah, that’s basically how it played out. Draymond Green got his franchise-record 12th triple-double (13, 11, 11) and Klay Thompson dropped a smoove 40 points. The Dubs remain a game ahead of the ’95-96 Bulls pace for the best record ever, through 73 games. Also, marinate on this:

Klay & Steph hit the 600 plateau in combined 3s tonight. Almost half the teams in the league don't have 600 threes this season

John Wall cruised to 22, 13 and 5 as Washington shot 54 percent for the game vs. the Lakers’ 38 percent. LA had a 3-point lead after one quarter but after that the Wiz woke up and ran away with it. Kobe had 17 points (6-for-15 shooting) in what was a common, crummy performance from the Lakers. The Wizards now sit 2.5 games back of a playoff spot with only nine games left—including one against the Warriors, so, yeah.