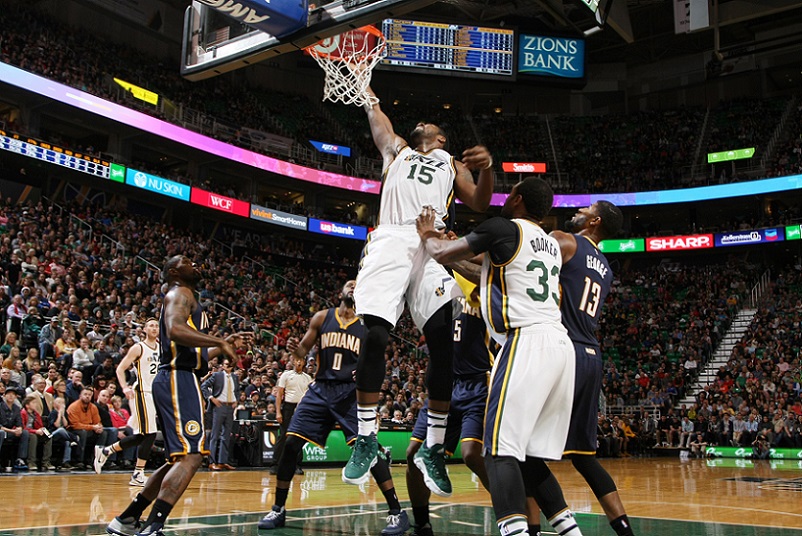 Despite a career-high 48 points and an insane 360 dunk from Paul George, Utah and Indiana squared off for an overtime duel after Derrick Favors converted an and-one with 10 seconds remaining. At the end of OT, Favors banked a layup to put Utah up three with 17 seconds remaining. With 13 rebounds and a career-high 35 points (6 of which came in OT), Favors came up huge from both ends.

A strong third quarter from the Orlando Magic couldn’t hold off the Clippers, who have now won 4 of their last 5. DeAndre Jordan deposited a highlight-reel alley-oop in the first half, which Aaron Gordon would counter with an emphatic putback stuff.

Aaron Gordon with the highlight reel put back slam! Must see! #SCTop10 https://t.co/7q9WZvJgHN

Throwing down a go-ahead dunk with under one minute remaining, Danilo Gallinari’s 24-point effort led the Nuggets to a close victory over the 1-20 76ers. Philadelphia received solid efforts from Robert Covington, Isaiah Canaan, and Nerlens Noel, but clearly is feeling ill-effects of Jahlil Okafor’s absence.

Toronto gave Golden State all they could handle in Saturday’s 5:00 p.m. showdown. Kyle Lowry and Steph Curry went to battle, posting 41 and 44 points, respectively. Despite a 16-point performance from DeMar DeRozan and a strong secondary effort from Lucas Noguiera (14 points on 7-9 shooting), Golden State kept their perfect record intact at 21-0.

Nicolas Batum led Charlotte with 24 points while Kemba Walker and Cody Zeller each posted 17 in the team’s victory Saturday. In his 1000th regular season game, Pau Gasol reached a double-double with 13 points and 11 rebounds.

The resurgent Rockets have now won three straight; James Harden led the way Saturday with 31 points, while Dwight Howard scored 22 on 7-9 shooting. Also helping the cause was Houston’s 16-34 shooting beyond the arc.

Having just been named an NBA Rookie of the Month, Karl-Anthony Towns scored 27 points while securing 12 boards. Despite Towns’ performance, a 19-point effort from Damian Lillard (including this filthy layup), helped stave off the T’Wolves.

The Heat quickly turned Saturday’s game into a laugher. Posting highlight-reel dunk after highlight-reel dunk, the Heat had little trouble holding off the LeBron-less Cavs. Held out by coach David Blatt for a rest night, King James should return to action Tuesday against the Portland Trail Blazers.

The Michael Carter-Williams we all remember re-surfaced on Saturday. Notching 28 minutes off the bench, MCW posted 20 points on 9-16 shooting. Just one night removed from an impressive double-double, Kristaps Porzingis had a night to forget in Milwaukee.

Despite a clutch Jae Crowder three to bring Boston within one late in the game, double-digit point efforts from LaMarcus Aldridge, Kawhi Leonard, Tony Parker, David West, Boris Diaw, and Manu Ginobili helped San Antonio notch their third consecutive victory. Sitting atop the Southwest Division, the Spurs have yet to lose at home this season.