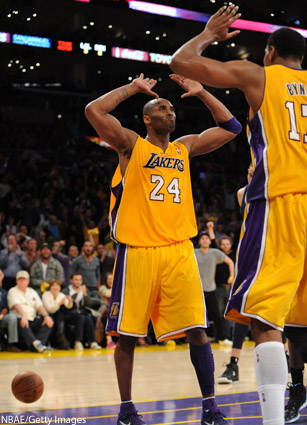 I want to slap Hinrich’s glasses off his face SO BAD. –Chris Mintz-Plasse on Twitter

For those in the dark, Mintz-Plasse is the dorky cool actor who played McLovin’ in Superbad. He’s a big-time Celtics fan too. You could kinda see where the young man’s hostility was stemming from. His beloved team had lost Game 1. His squad was without the suspended Rajon Rondo for Game 2. And the aforementioned Hinrich was, in fact, hitting just about every shot he put up.

As a team, the Hawks kept McLovin and the Cs faithful relatively quiet for the first two quarters. Yeah, Paul Pierce did his thing (16 points in the first half), but overall, Atlanta had just enough to hold Boston back. Aside from Hinrich’s steady work, Jeff Teague was amazing, Joe Johnson was adequate and Josh Smith was all over the stat sheet as usual. 44-41 Hawks at the break.

Hard to believe how the Hawks have collapsed in the halfcourt. –David Aldridge on Twitter

The TNT reporter’s tweet came somewhere in the third quarter. But to be completely honest, both sides were pretty shabby in the frame. Boston shot a putrid 26% while Atlanta’s 33% wasn’t much better. However, when the fourth came, the home team’s futility hit new lows. Unlike in Game 1, the Hawks looked like a frazzled flock here. Poor play executions. Awful clock management. Terrible shot selections. And worst of all, zero answers for Pierce (36 points, 14 rebounds). By the time the Celts had a 79-72 lead, Paul was strutting around with vintage swag. Final score: 87-80, Boston.

44 mins tonite to old for this I need a bed right now!!! –Paul Pierce on Twitter

Now the series moves to New England for Game 3 on Friday. The Hawks blew their chance to take a 2-0 lead on the short-handed Celts. The team knows it’ll now have to steal one at fired-up TD Garden. What it doesn’t know just yet is how bad Josh Smith’s ankle is after tweaking it on Tuesday. JSmoove didn’t talk to reporters after the game, but the buzz was that he was able to walk around under his own power—albeit gingerly.  —DeMarco Williams (@demarcowill)

It was a game, and then it wasn’t. That’s about the best way to sum up Game 2 of the Chicago Bulls-Philadelphia Sixers first round Playoff series Tuesday night at the United Center.

After losing Derrick Rose to a torn ACL in the final minute and change of Game 1 last Saturday, the biggest question for Chicago was how would the team’s mindset be without their leader to guide them. Of course, the team said all the right things in terms of how they’d respond without DRose, but talk is cheap and Philly put them to the test, as you’d expect them to.

The first 24 minutes of action was a tight affair that saw 8 ties and 12 lead changes between the two clubs. Philly led by no more than 3 points and the Bulls were up by as many as 10.

But then the 3rd quarter happened.

The Sixers shot lights out, outscoring the Bulls 36-14. Philly shot 15-22 from the field in the quarter compared to Chicago’s paltry 5-20. It’s not very often the outcome of an NBA game is decided in a single quarter, but that’s what happened to the Bulls. After playing on emotion and adrenaline in the first two quarters, when it was time to actually play basketball, Chicago just wasn’t ready.

The postgame locker room felt just like it did on Saturday afternoon when DRose got hurt. Like someone had just died.

Most people gave Chicago a shot to win this series even without Rose, but Philly did what they were supposed to do in the Playoffs and got a split on the road. More importantly, they have momentum going back home for Game 3. The Bulls could’ve psychologically taken Philly completely out of the series by winning Game 2.

But after Tuesday night’s bad loss, the worry now is if Chicago’s been taken out psychologically instead.

The Bulls won’t have a whole lot of time to get themselves together mentally or emotionally, either. The team will only get one practice in on Thursday before they have to leave for Philly to face the Sixers at home on Friday. —Bryan Crawford (@_BryanCrawford)

Tim Grover leaned back against the wall and watched him go to work. Kobe Bryant—fitted in a perfect gray italian suit, was still full of energy. He left the media room following his press conference and took a few photos with fans lucky enough to have access to the back hallways of Staples Center, giving out a few hugs along the way as well. Grover, the renowned trainer who built his name in the business through his work with Michael Jordan and countless other NBA players, trailed behind Kobe. Dressed in a designer sweater and carrying a briefcase, Grover was very pleased. “As long as Kobe’s healthy, I’m happy,” he explained.

Bryant was sensational on Tuesday night against the Nuggets in Game 2, playing with remarkable speed and intensity—running breaks and pump-faking defenders into and-ones. It was a lovely sight, 38 points on 15-29 shooting, leading the Lakers to a 104-100 victory and 2-0 series lead. The point total was Bryant’s highest in the Playoffs since game five of the 2010 NBA Finals—the rest he received over the past few weeks has come into play. “It’s helped tremendously,” he said. Bryant posted up on each elbow of the key throughout the game, taking full advantage of smaller defenders like Corey Brewer. During one sequence, Bryant bounced Brewer off him before knocking down another bucket over him. “Look man, I’m just stronger than him,” Bryant joked. “I’m bigger.”

The Nuggets have not held a lead at any point during the first two games, struggling again during the first quarter on Tuesday, and falling behind 12-3 in the early minutes. Ty Lawson helped Denver stay in the game with much better play in Game 2, finishing with 25 points and 7 assists. Denver cut the Laker lead to 95-91 with a little over 2 minutes left in the fourth quarter. After Kenneth Faried lost the ball on the offensive end, Kobe led a break down court and with defenders draped over him near the bucket, he dished it to Andrew Bynum for a three-point play that killed Denver’s momentum. Bynum finished with a career Playoff-high of 27 points and added 9 rebounds and two blocks. He was consistently double-teamed in the post, opening up space for Bryant and Pau Gasol.

Despite the Lakers coasting at times, Denver fought back with their rapid pace, converting quick baskets and making it a competitive contest. If they’re going to have any shot at turning the series around, Lawson believes it’s going to happen on the defensive end.

“We have to get stops,” Lawson said. “You can’t run after they get a dunk or hit a three. It’s easy to run when you get rebounds.” Game 3 is Friday night in Denver. —Nima Zarrabi (@NZbeFree)