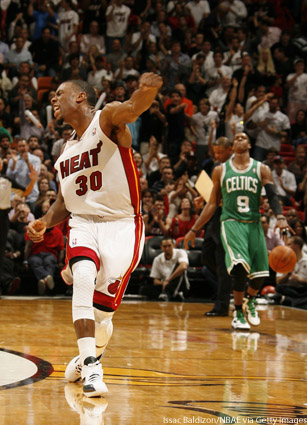 Now that every team has played at least one game, we can officially call the NBA season “in full swing,” even if the standings, stats and lineups have yet to stabilize. Tuesday was a lighter schedule, with just five games going on, but it was the third night in a row for the Lakers, who came in at 0-2, and opening night for Atlanta and Utah—who both opened on the road.

There’s the New Jersey we know. Over on TNT, Miami scored 69 points in the first half, while the Nets mustered just one point more for the entire game against the Hawks, shooting 31 percent from the field and 21 percent from three-point range. Luckily for residents of New Jersey, it’s the last home opener they’ll have to endure, with the team moving to Brooklyn for ’12-13. Deron Williams shot just 3-for-11 (10 points) and had 6 turnovers with only one assist. It’s hard to call anything a “bright spot” for the Nets in this game, outside of the sound of the final buzzer, but rookie Marshon Brooks did score 17 points off the bench to lead NJ. Sources tell me his nickname is “Young Mamba.” React accordingly.

And Atlanta, stop teasing us, honestly. Just stop it. Every regular season we go through this charade, this farce. Come post-season (if the Hawks are still playing), we’ll judge ATL. Until then, it’s hard to believe anything we see, since it’s a team that’s never amounted to much, despite the Johnson-Smith-Horford core and a revolving door of role players—not to mention, they lost their crunch time go-to guy in Jamal Crawford. For one night, though, we can give Atlanta some daps. No starter played more than 27 minutes, and six players scored in double figures, including a team-high 17 from Vladamir Radmanovic. Vlad Rad, baby! Marvin Williams had 14 points to go with 9 boards, the ghost of Tracy McGrady scored 12, and Jeff Teague did this in the win. Tonight, the Hawks host a Wizards team that lost to New Jersey on Monday. I’ll be watching, so that you don’t have to.

World, meet Norris Cole. Cole, World. We’ll get to the Cleveland State rook in a moment. First, let’s begin with what was getting Shaquille O’Neal hot and bothered before this one: Udonis Haslem’s hair. With Rick Ross and DJ Khaled sitting courtside in Miami (so many questions there: How did they fit in one seat each? Does Erik Spoelstra know who Rick Ross is? Who was Khaled’s girl? Could either score on Eddy Curry?), the Heat put on a show in the first half. LeBron James and Dwyane Wade went all Dunkin’ Donuts on the C’s en route to a 69-54 halftime lead. It got so bad in fact, that Rajon Rondo did this. Last season, Boston gave up 60+ points in one half just four times—already this season, the Knicks and Heat have done it in consecutive games.

The Celtics got back into the game thanks to a second half that started with four (4!) consecutive Mario Chalmers turnovers in less than 1:30 game time. Doc Rivers went to a zone defense to disrupt Miami, and Ray Allen scored 28 points (6-8 3PTs), including a big trey to bring Boston within single digits with six minutes to play. Then, Norris Cole introduced himself to the Celtics, and NBA fans across all cable networks. He drew a controversial charge against Brandon Bass, then wetted three gigantic jumpers down the stretch to seal the W for Miami. Cole scored 14 of his 20 points in the fourth quarter, and may have in one game sent Mario Chalmers back to the bench. I mean, dude got “MVP” chants at the foul line to end the game. James scored 26, Wade 24 and Chris Bosh 18 as the Heat gave us a taste of their new offense, which is basically Fast Break City. Good luck, opposing coaches.

Minnesota is fun. Unfortunately for Minnesota, fun does not mean winning. That’s 17 straight losses dating back to last season. Milwaukee rookie Jon Leuer, who played his college ball at Wisconsin, scored the last of his 14 bench points on a three-point play with just over a minute to play, and the Bucks held on for the win. They won despite a ridiculous 31-point, 20-point game from Kevin Love, who is playing great ball thus far for the Wolves. Love missed a three-ball at the horn that would have sent this thing into OT. Meanwhile, Derrick Williams made my ROY pick look bad for one night at least, finishing with 3 points and 5 rebounds in 19 minutes.

Brandon Jennings dropped 24 and 7 assists (one failed, but turned into 3 points and a tongue wag) to pace the Bucks, and Stephen Jackson managed to stay in the game long enough to jack up 20 shots, en route to 16 points. Andrew Bogut heaved 20 of his own, scoring 15 points to go with 9 boards. If Bogut is really healthy—which we may never know, for sure—and Jennings can keep up his scoring pace, the Bucks could sneak into the Playoffs in the East. That is, if Captain Jack can keep his act together, which is no small feat.

Gerald Wallace scored 25 points, LaMarcus Aldridge had 24, and each finished with 8 rebounds, leading the Blazers to their second win of the season. Portland can play defense—they held the Kings to 38 percent shooting and 3-16 from beyond the arc—and have that freaky Rip City home court advantage for opponents to contend with. Beware of the Blazers as a sleeper team out west. Five Kings players turned in double-digit nights, led by DeMarcus Cousins’ 16 points (and 11 boards). Tyreke Evans was not one of those five players. Evans had as many turnovers (5) as rebounds and assists combined, and shot 2-8 to finish with 4 points in 29 minutes. On a bad night for Reke, and with with Boogie beasting, it still seemed like Cousins didn’t get enough touches, didn’t it?

Settle down, Laker fans. L.A.’s first win was as much about Utah’s futility as anything. I know it’s one game, but holy crap the Jazz are terrible. Consider: In the team’s first season opener without Jerry Sloan roaming the sidelines since the late ’80s, not a single starter scored in double figures, Utah shot 32 percent (including 1-13 from three-point land, good for 8 percent!), and newcomer Josh Howard was the team’s second-leading scorer with 10 points. If not for Paul Millsap’s 18 and 8, the Jazz might not have made it to halftime.

As for the Lakers, seeing Utah on the schedule probably definitely came as a relief. Kobe went Mamba with 26 points, 8 boards and 5 dimes, plus one killer crossover against old friend Raja Bell. Pau Gasol added 22, and the artist formerly known as Ron Artest dropped 14 off the bench. Even Troy Murphy was productive, with 11 rebounds. The Lakers now get some much-needed rest…wait, no they don’t—L.A. hosts the Knicks on Thursday in primetime.

Awkward TV of the Night: Kevin Harlan likes Batman. Maybe a little too much. For reference, here’s who he was talking about.

Tonight: 10 games on the sked, including Thunder @ Grizzlies at 8 (NBATV), Clippers @ Spurs at 8:30, and pair of late-night goodies with Sixers-Suns and Knicks-Warriors. And, of course, my Wiz in Atlanta.