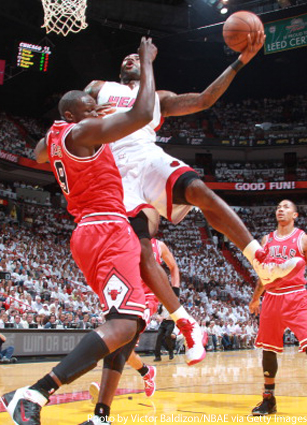 The Chicago Bulls’ struggles—specifically Derrick Rose’s—in the 4th quarter of games continued for the third game in a row on Tuesday night. After battling Miami hard in the first three quarters, even holding a lead for a very long stretch, the Bulls could not overcome the stifling defense of the Heat in the final quarter and the contest had to be decided in OT.

Derrick Rose made a commitment to come out and be more aggressive after passive play in Games 2 and 3, and that’s exactly what he did. Just ask Joel Anthony. Rose had three big dunks: one on a fast break with LeBron James trailing, one with Mario Chalmers attempting to draw a foul and one huge one on Anthony who tried to stop Rose at the rim to no avail. The play of the League MVP seemed to inspire Chicago and they jumped out to an early lead on Miami that put their opponent on their heels.

But Miami, playing in front of a packed house at the American Airlines Arena, would not be denied.

Led by the play of LeBron James, who took the assignment of guarding Derrick Rose down the stretch—limiting him severely—and some questionable offensive isolation calls late in the game on the part of head coach Tom Thibodeau, the Heat once again imposed their will on the Bulls in the late moments of regulation and in overtime, shutting Chicago down with swarming defense and going to James on the offensive end. He continues to make big plays in these Playoffs by singlehandedly closing teams out in crucial moments.

Along with the stellar play of James, who had his first 30+ scoring outing in this series, Miami also got a huge lift from Mike Miller off the bench, as he gave a similar contribution to the one they got from Udonis Haslem in Game 2. Miller chipped in 12 huge points off the bench and also grabbed 9 rebounds; his scoring seemed to help Miami get off the ropes and gave them the momentum they needed to overcome Chicago who, at the very least, seemed to rectify their offensive struggles from the last two contests in this game.

Miami now goes up 3-1 in the series in a game where Dwyane Wade was mostly nonexistent and it seems to now be a matter of “when” and not “if” the Heat will close out the Bulls to win the Eastern Conference Finals and advance to the NBA Finals. The loss was a crushing blow to Chicago, similar to the one the Oklahoma City Thunder suffered at the hands of the Dallas Mavericks the night before. It wasn’t an easy victory by any means, and the Bulls did give it their best shot. It still wasn’t enough.

Miami will look to close the Bulls out in Game 5 Thursday night at the United Center.—Bryan Crawford (@_bryancrawford)