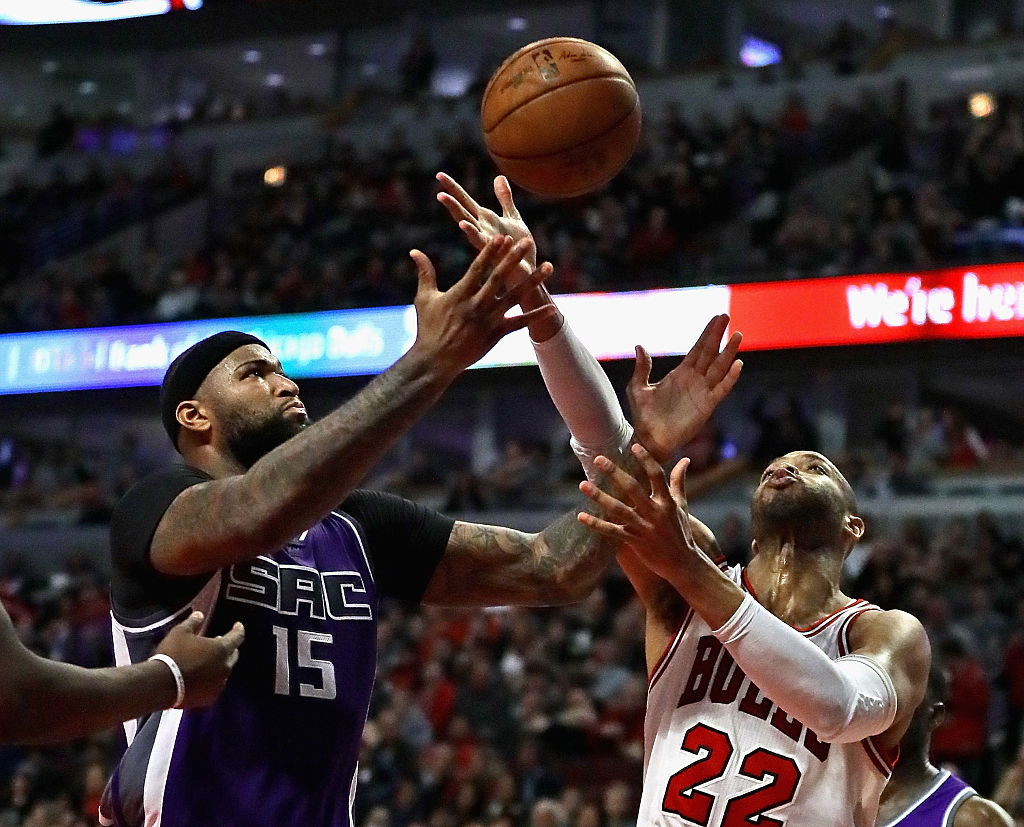 It was a tough loss in OT for the Cavs, who were torched for a career-high 41 points by Kawhi Leonard, as well as double-doubles from LaMarcus Aldridge and David Lee. LeBron James and Kyrie Irving dropped 29 points each, including this clutch bucket toward the end of regulation:

LeBron for the tie! 💰💰💰 pic.twitter.com/Sa6h7RirYy

It’s a shame for a neck-and-neck game to be decided by a phantom foul call, but here we are. With the game knotted up at 99, Dwyane Wade picked Garrett Temple’s pocket for a wide open look downcourt. Wade muffed the dunk, however, and was rewarded with a foul call on DeMarcus Cousins well after the fact. Take a look:

DeMarcus Cousins hit with a phantom foul call in a game-deciding possession…not exactly a shining moment for league officials. pic.twitter.com/KEK8QU5Jo7

Cousins dropped 42 points with 14 boards in an otherwise dominant showing, and Wade combined with Jimmy Butler for 53 points.

The bad call will overshadow Wade's two amazing steals in the last 30 seconds. He had Cousins perfectly sized up on that spinback.

The Nuggets are reportedly shopping Jusuf Nurkic (12p, 5r), but he worked well with Nikola Jokic (19p, 10r) in this one. Wilson Chandler, Danilo Gallinari and Will Barton scored 18 points each, as Denver now holds sole possession of the Western Conference eight-seed. Blake Griffin is close to returning, which will be a boon to the Clippers’ short-handed offense.

Kenneth Faried praised the crowd tonight. "I hope they realize we need them as much as they need us." #Nuggets

C.J. McCollum and Isaiah Thomas went head-to-head at the TD Garden, as Thomas racked up 41 points on 14-28 shooting while McCollum dropped 35 points on 11-21 shooting. Terry Rozier ultimately helped Boston pull away with a 3-pointer at the end of regulation, but Meyers Leonard was the talk of Beantown; putting Jordan Mickey on a poster TWICE in the first half.

In a battle of the Morris brothers, Marcus scored 25 points with 11 boards, including the game-winning tip-in.

“I grabbed him, put my hand on his shoulder and got him back because he blocked my shot the play before that,” Marcus Morris said of Markieff. “I knew that was him (standing there). You can’t make that call at the end of the game.”

The Nets weren’t able to capitalize on the momentum of their 143-114 win over the Pelicans, coming back down to earth in Saturday’s loss against Charlotte. Now on his second 10-day contract, Quincy Acy continued to show he belongs, netting 14 points with four boards. Michael Kidd-Gilchrist led Charlotte’s scoring, netting 17 points with 14 rebounds, while Nic Batum and Kemba Walker added 16 points each.

Despite early highlights from T.J. McConnell and Nik Stauskas, the Joel Embiid-less 76ers were outgunned by Paul Millsap (22p, 10r) and the Hawks. After the game, Dwight Howard took an opportunity to predict the outcome of tomorrow’s game between the Falcons/Packers.

The Knicks have reached their nadir, getting outclassed by the Suns at MSG. Devin Booker and Eric Bledsoe scored 26 and 23 points, respectively, and former Knick Tyson Chandler dominated the paint with 16 rebounds. Carmelo Anthony’s attempt at a game-winning trey rolled in and out, however, resulting in the latest of the Knicks’ recent frustrating losses. Chatter of a potential Carmelo Anthony trade will continue around the league, particular after his recent interview with Newsday:

“I think it will be more on the front office,” Anthony said. “I have the power, but still I would talk to them. We would be in communication if they feel like they want to go in a different direction, they want to start rebuilding for the future. If they tell me they want to scrap this whole thing, yeah, I have to consider it.”

Dion Waiters matched his previous career-high with 33 points and Goran Dragic added 25, handing Milwaukee their fifth-straight loss. The Bucks held a closed-door meeting after their loss to the Magic on Friday, resulting in Jabari Parker being held out of the starting lineup Saturday.

Jabari Parker said he spoke up in team meeting for first time and "was getting thrashed." But said at least he gave his perspective.

Jason Kidd’s squad will look to turn things around against the Rockets on Monday.

James Harden had plenty of help from his supporting cast Saturday, as Sam Dekker dropped 30 points on 12-19 shooting and Eric Gordon added 21. Marc Gasol scored a game-high 32 points but Mike Conley went shot just 35% from the field in the loss. Memphis will have plenty of time off before their match-up with Toronto on Wednesday.