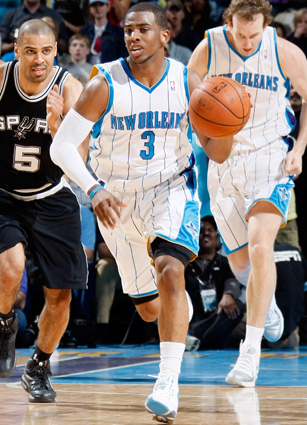 A bunch of games yesterday, but my focus was firmly on the Raptors/Bulls contest. I was at the game and spotted an empty seat courtside on press row (I’m usually in a different press section), and emailed Raptors PR who told me to make the move, so I was able to watch Derrick Rose, and Ben Gordon in action and watching them will their team back from 18-down was something.

Watching Gordon’s shot over Bosh to tie the game at the buzzer and force overtime was special. Watching Rose go inside again and again, fearless as he went to the hoop was amazing. He ended up turning the ball over in traffic on the Bulls final possession in the extra session, but it didn’t even matter. 23 points and 9 assists later, he’s no rookie.

He deserves the award though. And you know I was on the OJ side of things. I can’t deny Rose any more. So calm and collected. Except for that turnover at the end of the game. He was furious with himself then. I felt for him. Good win for the Raptors though. Love how they string a four game winning streak together now that it doesn’t really matter.

I really, really, really hope we have Pops Mensah-Bonsu here next season. How guys like this don’t latch on with an NBA team quicker, I don’t know. I’m so happy for him though, whether with Toronto or not, he’s earned himself a contract next season. Chatted with him a bit postgame about the NBDL and his diet. Turns out he’s trying to eat better and take care of his body now, before that metabolism slows down. This led to an interesting convo about per diem and the NBA versus the NBDL.

Speaking of the game, the Raptors won in overtime, 134-129. Chris Bosh finished with 31 points and 15 rebounds as Jose Calderon had 22 points as he tied the franchise-high with 19 assists. The Bulls had a 37-point night from Ben Gordon, while Derrick Rose had 23 points and 9 assists and Joakim Noah scored 16.

Thoughts go out to Stephen Jackson who will miss the rest of the regular season after having surgery on his toe. Kinda screws with my fantasty team and playoffs start today. I’ve been in first for most of the season and I want to keep it that way. Wish me luck.

Thoughts also go out to Mike Taylor, who went down hard after banging knees with Yao Saturday night. He came back into the game, but man, tough break when you’ve finally been given your chance. Hope he doesn’t need any down time.

Okay, so the Lakers were defeated by the Hawks. I didn’t see this, but CoCo tells me so. 86-76 for the Hawks and it looks like it was an ugly one from the boxscore. Neither team shot over 40% and Kobe Bryant and Joe Johnson were fighting each other for the ugliest fg %. Bryant finished 7-19 for 17 points while Johnson finished 4-18 for 10 points. Pau Gasol had 21 and 11 for LA while Mike Bibby had 21 for the Hawks. The Lakers scored just 13 points in the first quarter for a season-low.

The Cavs took down the Mavs easily, 102-74. It was ugly for Dallas. The highlight of the game happened in the third quarter when LeBron James ran into a ref and went down. We were watching in the press room before the Raps tip off and everyone in that room stopped what they were doing as a hush came over us until we saw that Bron was okay. Funny how he can stop the world with a fall. Anyway, the Cavs have another home win, have won 12 straight and have the best record in the NBA. Give this man the MVP and give the Cavs an award for their entertaining intros, I’m enjoying watching them. Bron had 24 points and 12 assists, Mo Williams added 22 points and Zydrunas Ilgauskas added 14 points and 9 boards. Dirk Nowitzki led the Mavs with 20 points, while Jason Terry and Erick Dampier each added 10 points.

I still haven’t seen Bron’s halfcourt shot on 60 minutes that everyone keeps on linking to, apparently it’s not available in my country. Whatever.

The TWolves were killing the Nets for most of the game but New Jersey made a game of it late before falling, 108-99. Vince Carter had 36 points in the loss while Devin Harris ended up with 19. The Wolves were led by Mike Miller’s 22 points, 10 rebounds and 5 assists. Ryan Gomes scored 21 points while Rodney Carney added 19 off of the bench. Kevin Love added 16 points and 11 rebounds in the victory.

The Hornets escaped with a win over San Antonio, 90-86, thanks to Chris Paul having the mind to throw up a shot just over the half when he was fouled with 7.1 seconds remaining, to draw three free throws. After hitting all three, the Hornets were up four and went on to the victory after a shaky final few minutes that saw the Spurs cut a seven-point lead down to one in a matter of seconds. Paul finished with 27 points, 7 rebounds and 9 assists as David West scored 23 points to go with 16 rebounds. The Spurs were led by a 19-point, 15-rebound night from Tim Duncan as Tony Parker added 20 points and 7 assists and Manu Ginobili scored 17 off of the bench.

Losing 126-118 is another nail in the coffin for the Phoenix Suns and their playoff hopes. One night after losing to the Blazers, the weary Suns came to Sacramento and fell again. While they still have time to make up ground on Dallas, they are going to have to get some help from the Mavs if they want to make the postseason. In this one, Spencer Hawes was great for the Kings, finishing with 20 points to go with 10 rebounds while Jason Thompson scored 21 points and Francisco Garcia and Andres Nocioni each scored 19. The Suns were led by Steve Nash’s 31 points and 14 assists as Shaquille O’Neal added 24 points and 9 rebounds and Jared Dudley added 17 off of the bench.