Kobe Bryant announced his retirement, while Houston came from behind in MSG. 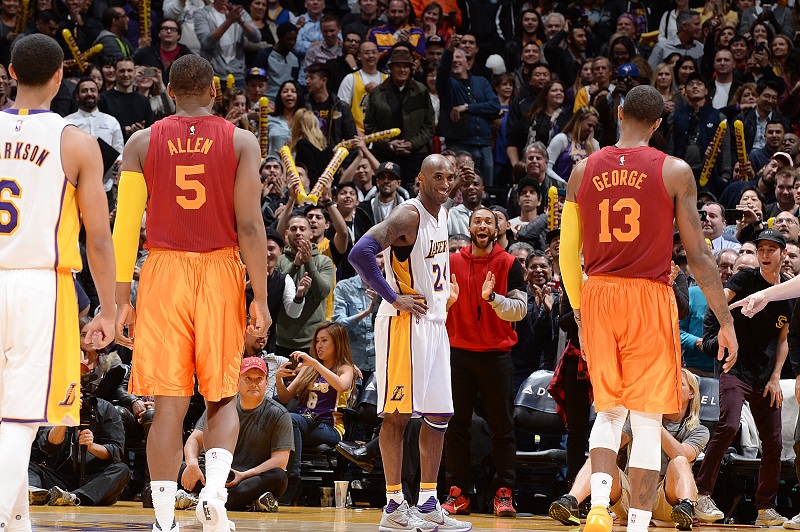 Kobe Bryant drew headlines before Sunday’s game, announcing his retirement after the 2015-16 season. Playing over 30 minutes on back-to-back nights, Bryant took the court against Indiana to a welcoming Staples Center crowd. Despite hitting a three with 14 seconds remaining to bring L.A. within one, Kobe Bryant and the Lakers ultimately fell to Indiana in a back-and-forth match-up. With Lakers head coach Byron Scott announcing that Bryant’s minutes will remain the same through the season- at 2-14, the Lakers don’t have playoff implications to plan around-  it’s clear there will be no shortage of fun match-ups in Kobe’s final NBA go-around.

The Knicks let a 15-point lead fall by the wayside in Sunday’s overtime loss to the Rockets. Despite a season-high 31 points from Arron Afflalo and a double-double from Kristaps Porzingis, strong efforts from James Harden and Dwight Howard helped Houston pull away in OT. Amidst news of Kobe Bryant’s retirement, Dwight Howard threw some shade in a post-game interview.

Dwight Howard on if he learned something from Kobe Bryant: laughs, followed by long pause: "I'm gonna go to the next question on that one."

Kemba Walker remains on a tear. With Sunday’s 22-point performance, the former UCONN standout has scored at least 16 points in each of his last seven games. Meanwhile, Al Jefferson departed with a left calf strain in the first quarter — the 30-year-old big man will undergo an MRI on Monday to reveal the extent of the injury.

Minnesota’s young core continues to impress. Karl-Anthony Towns, Andrew Wiggins, and Zach LaVine put up 17, 21, and 18 points, respectively, while Gorgui Dieng posted 14 points off the bench. It was Blake Griffin, however, who stole the show in this one, posting 26 points on 9-16 shooting, including this stuff in the first half.

A 15-point effort from Brook Lopez guided Brooklyn to their fourth win of the season. The Pistons continue to scuffle, shooting just 34 percent from the field (despite an Andre Drumond double-double) while dropping four of their last five.

“We haven’t built our identity yet as a unit,” Crowder said. “Coaching staff hasn’t figured it out yet. We don’t have set rotations. A lot of guys don’t know where we’re going to play or what time we’re going to play. It’s affecting us a little bit. We’ve got to figure it out as a unit, figure it out as a coaching staff. We gotta build our identity in who we want to be. We’re a month into the season and we haven’t figured it out.”

A double-double from Eric Bledsoe and strong performances off the bench from Jon Leuer, Mirza Teletovic, and T.J. Warren helped Phoenix  snap a four-game Toronto winning streak. DeMar DeRozan did his part, matching his season-high 29 points.

Philadelphia continues to have no answers for the rest of the league. With a 17-point night from Z-Bo and a 20-point effort from Mike Conley, Memphis had little trouble handing the 76ers their 18th loss of the season. Vince Carter even got in on the action, coming off the bench to deliver this jam as his only field goal.