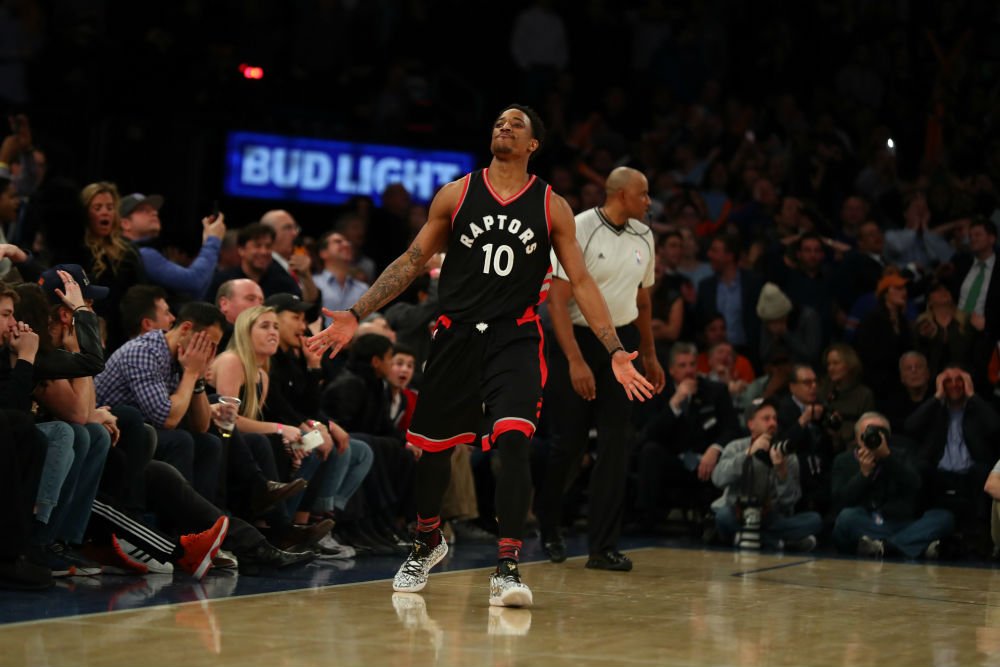 Trailing by as much as 17, the Raptors fought their way back at Madison Square Garden, thanks in large part to the play of DeMar DeRozan. The fifth leading scorer in the League dropped a cool 37 points on 13/25 shooting, and hit the game-winner. Melo had a chance to steal the spotlight, but couldn’t get his last second attempt to fall:

Toronto has now won four games in a row.

It was a rough night for Stephen Curry, as the two-time reigning MVP shot a career-worst 0-11 from three-point range. KD helped pick up the slack, dropping 27 points and grabbing 8 boards.

After battling strep throat, LeBron suited up tonight and posted 24 points, 10 rebounds and 6 assists. His teammate Kyrie did his thing as well, pitching in 25 and 9 dimes.

Giannis just couldn’t get anything going for Milwaukee. He scored nine points on 4/13 from the field. Malcolm Brogdon impressed, however, notching 20 points in 31 minutes off the bench.

After picking up two technicals, Dwight Howard was forced to leave this one early, but not before the big fella recorded 17 points and 12 boards. He also trolled a Celtics fan on his way out.

Dennis Schroder led all scorers with 21. Isaiah Thomas had 19 points, 7 rebounds, and 7 assists, but shot just 4/21 from the field. The one positive for the Cs: Avery Bradley returned after missing 22 of the last 23 games with an Achilles injury. He had 6 points in 15 minutes of action.

On a night where Stephen Curry couldn’t buy a bucket, Seth Curry was on fire. The sharpshooter scored 29 points on 10/17 from the field and 5/7 from deep, helping to hand the Heat just their third loss in 19 games. Goran Dragic (24 points) and Hassan Whiteside (19p/19r) did work for Miami.

Down by 11 after the first quarter, Indiana used an impressive second (39-27) to get back into this one. Though Paul George struggled to get buckets (only 5/16), the Pacers managed to shoot 43% from deep and score 117 points. Jeff Teague led the way with 25, and Stuckey added 17 off the bench. In just his third game with the Rockets, Louis Williams dropped 28 points in 28 minutes and had a number of big plays in the fourth quarter. Looks like it was a solid mid-season acquisition for Houston.

LOU WILL. (via @NBA) pic.twitter.com/WDoilEUojB

KAT went off in this one, posting 29 points and 17 rebounds on 13/19. Andrew Wiggins contributed 27 as well. No one scored more than 14 for the Kings, with six guys reaching double figures (Koufos, Cauley-Stein, Collison, Lawson, McLemore, and Evans). Minnesota has won three of their last four, while the Kings have dropped their last two.