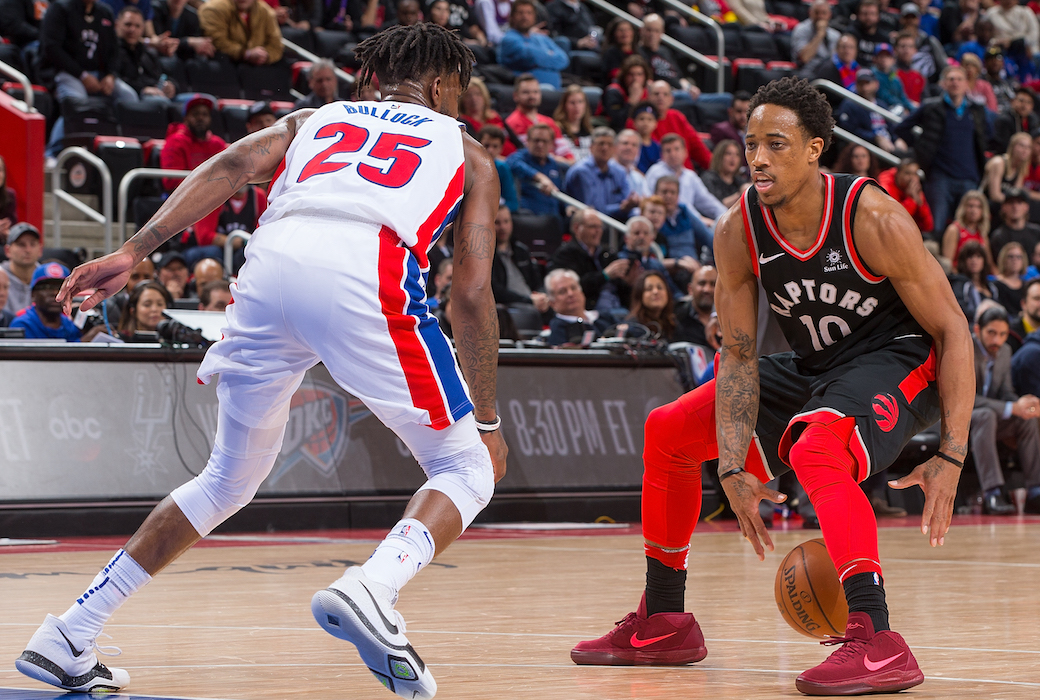 DeMar DeRozan scored 42 points, assisted on the game-winner in overtime, and provided the highlight of the game with an emphatic dunk in the closing seconds of regulation. All that made Toronto the first team in the NBA to clinch a playoff spot, despite the Raptors trailing by as many as 17 in this one. Blake Griffin had 31 points and Andre Drummond had 10 points and 21 rebounds for the Pistons, but a jumper from Fred VanVleet as time ran down in overtime lifted the Raptors to the narrow victory.

We’re going to overtime, but not before DeMar DeRozan did THIS (via @NBA) pic.twitter.com/m3XzhCy1if

Rudy Gobert, Donovan Mitchell, and Ricky Rubio all shined as the Jazz won their fourth in a row. Utah, a team that was once 17-26, is now closing in on the 8 seed in the West with 16 games remaining. Gobert had 23 points and 14 rebounds on 10-14 shooting, while Mitchell hit four threes, scored 20 points, and handed out six assists. As for Rubio, he filled the stat sheet with 18 points, seven assists, and six rebounds. Myles Turner had 24 to lead the Pacers.

The Bulls nearly coughed up a 21-point lead but held on to hand the Grizzlies their 15th-straight loss — the longest in the NBA this season. Lauri Markkanen had 22 points in the win while Zach LaVine and Kris Dunn each had 21. Dillon Brooks had 29 points to lead Memphis.

LAURI WITH THE 🔨 (via @nba) pic.twitter.com/pJp1E3oT6c

While Memphis has the longest losing streak in the league, the Rockets grabbed the longest winning streak, earning their 17th in a row behind 26 points from James Harden. The Rockets made 14 threes (though they took 40 of them) to hold on through a hotly contested second half. Giannis Antetokounmpo went 12-20 from the field and scored 30 points for the Bucks.

Anthony Davis scored 17 points but left in the third quarter after rolling his ankle. Though he did not return to the game, x-rays came back negative. Davis’s injury did not stop New Orleans from winning its 10th in a row as Nikola Mirotic came off the bench to score 26 more and the Pelicans shot 57 percent as a team. Buddy Hield had 20 points for the Kings.

AD with his sixth block of the night and finishes with a SLAM 💪#DoItBig pic.twitter.com/cWPVkgnGxh

Aaron Gordon put the Magic ahead by a point on a layup with five seconds left, but Brook Lopez hit two free throws with less than a second to go to give the Lakers a thrilling win at Staples Center. Those two were also the scoring leaders for the game — Gordon had 28 and Lopez scored 27. Kyle Kuzma also had 20 points and 10 rebounds for the Lakers, who picked up their sixth win in seven games.

IT with the no-look to Brook and he finishes strong with two hands (📺: @SpectrumSN & @spectdeportes) pic.twitter.com/RpEF0aA5xh

LeBron James went for 39 points, eight rebounds, and 10 assists to help the Cavaliers to their second win in a row. Cleveland led by 15 after the first quarter and withstood a second-half rally from a Denver team that came into the game 24-9 at home. Nikola Jokic had 36 points, 13 rebounds, and six assists to lead the Nuggets.