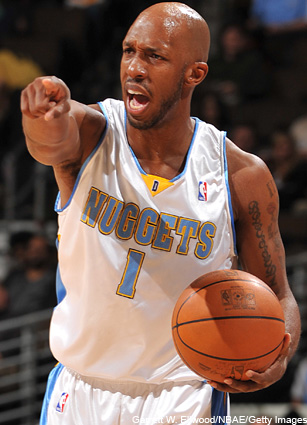 Wanna know how to take the fun out of a busy Tuesday night with 10 games on the schedule? Liveblog the Dallas/Denver game which was a 26-point blowout by halftime and had Denver up by 30+ for the better part of the second half. Yuck.

It got ugly. Really ugly, really fast. The final score was 127-91 for Denver. The good news is that Melo was back and he looked good. Didn’t appear to be too rusty or anything, took him a minute to get his stride offensively, but he finished with 19 points and six assists and was able to rest after putting in 30 minutes of play. Kenyon Martin sat out the game with a sore knee. Billups was great, with 16 points and six assists, Ty Lawson was fun and had seven assists off of the bench, but it was Nene that was the story here.

Nene was insane. He was strong, powerful and aggressive. One of his offensive rebounds that he slammed home was perhaps the strongest put back I’ve see all season. He had 21 points on 8-for-9 shooting and I wish he could have played longer because the Mavs didn’t have anyone who had any hope of guarding him.

The Mavs. They looked awful. Yes, they played the night before in Golden State and got the win there, but they’ve been in a slump for the past few weeks and the performance –or non-performance– against the Nuggets last night was just a different level of bad. It was painful to watch. I miss the old Josh Howard. He played really well in Golden State, but he just doesn’t look the same anymore. All of the little things he brought to the table that made him one of my favorite –the defense, hustle, diving, slashing, etc.– I’m not seeing it. I hope he gets it back.

In Charlotte, the Bobcats survived a close one against the Wizards, grabbing the 94-92 win thanks to Raymond Felton coming up big and hitting a fadeaway with 1.9 seconds left to get the W, moving the Bobcats to .500 again this season. Stephen Jackson had 22 and Tyson Chandler returned after missing 22 games, but played just seven minutes.

I’m a little bummed about today, because the Sixers are in town and I’ve had this one circled on my calender for awhile. It was supposed to be Allen live, but he’s not playing because he’s home with his family. Well wishes are being sent to his fam and I’m hoping he’ll be in uniform in Toronto on March 7th, so I can finally see Iverson in action, live. Of course, the Sixers won big against he T-Wolves last night, so they are probably all rested for tonight against the Raps. With how well Toronto’s playing, I’m pulling for them to get the W as they head into All-Star break.

At MSG, Omri Casspi got plenty of love and he got the 118-114 OT victory after almost losing the game for his team when he inexplicably asked for the ball, then made no move to go for it when Tyreke Evans passed it to him. Luckily for Casspi, the Knicks couldn’t save themselves with Jared Jeffries taking an awful 3-pointer that was just ugly. Evans was balling in the Garden, finishing with 27 points, 10 rebounds and six assists. Yes, this is a rookie putting up these numbers. Donte Greene also had a great game, finishing with 24 points and eight rebounds. Casspi finished with 19 and 9 boards. For the Knicks, Wilson Chandler scored a career-high 35.

Houston shot just 30 percent in a 99-66 loss to Miami where they had eight assists… to 16 turnovers. Eight assists total. In 48 minutes. Yeah. Glad I missed that one, even though my liveblog was a gongshow of a game.

Jamal Crawford has to be the sixth man of the year this season, right? He’s also looking like the best move of the offseason. Atl got the W against Memphis.

In Portland, the Thunder got the 89-77 victory and Kevin Durant topped 30 points for the league-leading 30th time this season. Pretty wild. He also scored his 5000th career point along the way as the Thunder pulled away in the second half after being tied with the Blazers at the half. Martell Webster took a nasty, nasty fall, landing hard on his back. Hoping he feels okay today, because that one looked like it hurt.

James Harden was awesome off of the bench in the second half, while Durant’s 33 and 11 boards led the way as Jeff Green added 17. The Blazers were just 3-for-20 from beyond the arc as they had 22 points from Andre Miller to lead them in the loss.

I think I speak for us all when I say that I want Brandon Roy back soon. Healthy, of course, but back asap.

Oh yes, the Cavs defeated New Jersey, 104-97 (seriously, these close games Jersey has been in lately is crazy), moving their win streak to a season-high 12 games. Bron watch: 32 points, 11 assists.