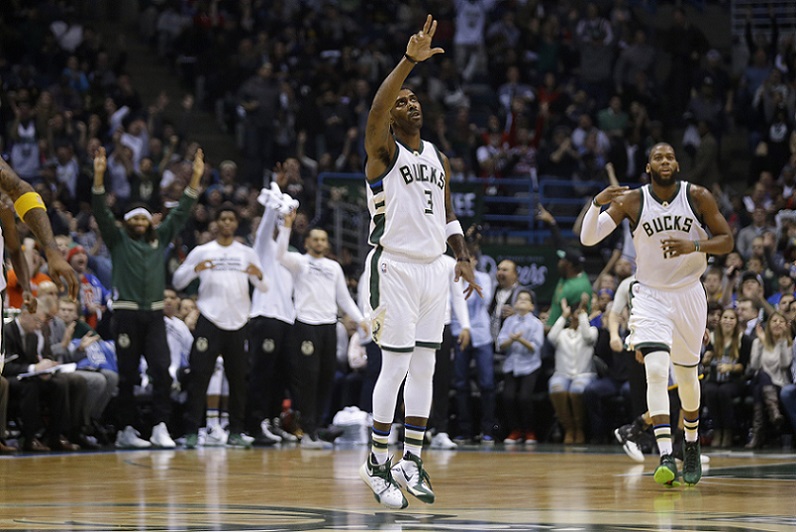 A triple-double from Giannis Antetekounmpo and double-double from Greg Monroe led the Bucks to an improbable victory over the 24-1 Golden State Warriors. Stephen Curry did his part in the loss, adding 28 points with seven rebounds, five assists, and a steal. Playing the day after a double-overtime game is no small task, but nothing should be taken away from the Bucks’ accomplishment.

After getting off to an auspicious start, the Knicks beared down to pull off a must-win victory on the road. Carmelo Anthony led the way with 37 points on 13-of-21 shooting, while Derrick Williams came off the bench to go 3-for-4 from downtown…including this puzzling shot.

The Wizards found a way to win Saturday without Bradley Beal; a task they’ll need to replicate over at least the next two weeks. Otto Porter Jr. picked up the team’s slack, dropping 28 points, while Marcin Gortat added a double-double.

San Antonio collected 49 total rebounds Saturday in a rout of the Hawks. Kawhi Leonard and Manu Ginobili responded well to minimal workloads Friday against the Lakers, posting 22 and 17 points against Atlanta, respectively.

While the Pelicans weren’t able to hang on for victory in Saturday’s contest, they did receive a nice ego boost in the form of Anthony Davis’ posterizing dunk of Pau Gasol. Ultimately, Chicago’s big men proved to be the difference, as Gasol and Nikola Mirotic dominated the boards for double-doubles.

30 points from James Harden and double-doubles from Dwight Howard and Clint Capela helped Houston breeze past the hapless Lakers. Howard and Kobe Bryant have had a very public and contentious history, but after exchanging pleasantries in pregame warmups, the two appeared to have quashed their beef.

Dwight said he joked with Kobe on if he is really retiring. Dwight called Kobe "one of the greatest players to ever play the game"

While Indiana can take small comfort in Jordan Hill’s highlight-reel dunk over Ersan Ilyasova, this one was all Pistons. Having now posted 21 points in two straight games, Reggie Jackson came one assist shy of a double-double on Saturday.

Showing little rust from Friday’s double-overtime war with Golden State, the Celtics held off the surging Hornets thanks to a double-double from Isaiah Thomas, and 23 points from Avery Bradley. While Spencer Hawes and Cody Zeller were productive Saturday, the team continues to suffer from Al Jefferson’s absence.

After giving Brooklyn fans a taste of Lob City, the Clippers returned to their winning ways against a struggling Nets team. Los Angeles continues to flourish with a healthy Chris Paul in the lineup; CP3 added 15 points with 14 assists in his fourth game since returning from a ribs injury.