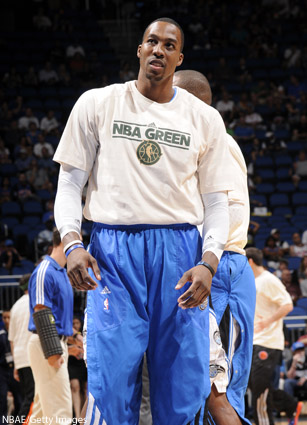 Lets’ face it, I probably could have left this morning’s Post Up completely blank, save for the scores, and still would have gotten dozens of comments on the next chapter of “The Dwightmare” alone. But there were three other games last night, including my woeful Wiz, so before the Dwight discussion begins, let’s recap what went down.

Orlando fan, I don’t envy your new life. Welcome to the new world order, starring Dwight Howard. After his now well-known pre-game shenanigans with head coach Stan Van Gundy, Dwight went out and put up zero points in the first half. He finished with 8 points, 8 rebounds, 3 blocks and 5 turnovers in 40 minutes of action. He only took 8 shots. Sure, Tyson Chandler bothered him all night while going for 12 and 12 of his own, but seriously, Superman—what was that? You know the Magic drama is reaching maximum levels when the always-dramatic Knicks come to town and are barely a blip on the radar screen. Carmelo Anthony led all scorers with 19 points, while the Magic’s leading scorer on the night was Jason Richardson (16 points). The word “strange” doesn’t even begin to describe what’s going on in Orlando right now.

The words “Ben Wallace” and “clutch free throws” typically don’t end up in the same sentence. In fact, Ben Wallace’s name alone is barely relevant anymore, unless we’re talking about his impending retirement. Then again, when it comes to new ways for the Wizards to lose, why not add Big Ben to the mix! Wallace was inserted in the third quarter to provide a more physical paint presence—as John Wall repeatedly got to the rim to the tune of 28 points, 10 assists—and ended up playing the final 18 minutes, shooting 5-6 from the line in the fourth quarter. His free throw shooting defeated Washington’s “hack-a-Ben” strategy, and those 5 free tosses were his only points on the night—heck, he didn’t attempt a field goal. His Pistons teammates shot 53 percent en route to the win.

Down 49-38 at halftime, the Bulls used a 14-2 run in the third quarter (in which they outscored the Celtics 29-17) to pull ahead of Boston and hold on for win No. 43 on the year. Chicago snapped a mini 2-game losing streak, and is now 15-7 without Derrick Rose. The biggest boost for the Bulls last night came from noted Celtic-killer Luol Deng, who did most of his damage in the final period, finishing with 26 points, 6 rebounds, 4 steals and 3 assists. Carlos Boozer had 12 points and 14 rebounds and Joakim Noah went for 17 and 9 to help Deng out. Boston, on the other hand, got 22 points from Paul Pierce and double-double for both Kevin Garnett (12 points, 14 rebounds) and Rajon Rondo (10 points, 12 assists). It was Rondo’s 15th consecutive game with at least 10 dimes. I’ll leave you with this nugget from Charles Barkley, who said post-game, “If you don’t like the Chicago Bulls you don’t like basketball—they are the toughest team in the NBA.”

Blake Griffin set aside his highlight-reel dunks long enough to drain 3 big jumpers down the stretch against Sacramento, the last finding the bottom of the net with 2:18 remaining to give the Clippers a 3-point lead. LAC’s 7-0 run to end the game was enough to fend off the pesky Kings, who got 17 points from Isaiah Thomas and a 15×16 double-double out of Jason Thompson. DeMarcus Cousins felt the effects of foul trouble, managing to log only 18 minutes and score 8 points on 8 shots. Each team finished with 18 turnovers—Chris Paul had 5 for Lob Angeles, but also dished out 8 assists, had 5 steals and scored 13 points. Randy Foye led all scorers with 20 points.

Line of the Night: Wall was the high-point man with 28, but the most interesting “line” was clearly Howard’s.

Ouch of the Night: Referee Bill Kennedy gets caught in the wrong place at the wrong time and takes a shot from Landry Fields. Get well soon, Bill.

Moment of the Night: The TNT crew recaps the Dwight Howard-Stan Van Gundy situation and offers their own unique brand of analysis.

Tonight: Pete’s back to hold you down for the next two nights, starting with 11 games on Friday. I’ll be back on Monday morning to recap what should be a fun weekend. Be easy.