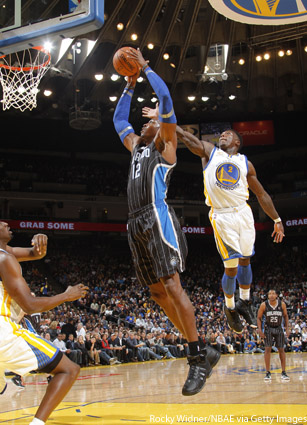 I had a whole introduction written out about how the NBA is a point guard-driven League (which I still believe, for the record). I even had a nice photo of Kyrie Irving picked out for the home page. And then Dwight Howard had to go and ruin it for me. I wanted to talk about how last night, we saw it all at the point guard spot—a matchup of the No. 1 pick vs. a two-time MVP, young guns in Milwaukee, Detroit, Atlanta and Memphis, and of course, the glaringly obvious lack of talent at the PG spot in New York. But Dwight, and the stubborn”genius” of Mark Jackson, had to go and create perhaps the wackiest basketball sideshows we’ll see all season. Let’s start with the more conventional games from last night…

After getting the crushing news that Al Horford’s season may be in jeopardy earlier in the day, the Hawks put on an inspired performance, led by 30 points (without shooting a single three-ball) and 13 rebounds from Josh Smith, the big remaining front court piece for Atlanta. Thanks in part to Smith, the Hawks dominated on the boards, winning the rebounding battle 55 to 30 (including 20 offensive boards, whoa!) on the way to an easy win. A Gerald Henderson jumper brought the Bobcats within eight points in the third quarter, but Atlanta never let Charlotte get any closer than that, leading by as many as 30 at one point. Joe Johnson turned in 23 points, 8 assists and 7 rebounds, and Jeff Teague had 16 to go with 7 assists and 6 boards for the Hawks, who improved to 8-4 and 4-1 at home. The Bobcats, meanwhile, dropped to 2-9, giving up 24 fast break points and making just 1 of 8 three-point attempts. Byron Mullens got his first career start for Charlotte, and made it count, scoring 21 points. Henderson was the only other Bobcat in double figures, with 16 points, while Kemba Walker shot just 2-for-9 with 6 points. And, from the breaking news department, we had a Jerry Stackhouse sighting! He scored 2 points on an open-court dunk, getting some burn in place of the injured Tracy McGrady.

Greg Monroe and Tayshaun Prince did all they could do get the Pistons their first road win of the season, but Milwaukee got 27 points from Brandon Jennings and 25 points from Stephen Jackson and outlasted Detroit for head coach Scott Skiles’ 400th career win. Monroe scored a career-high 32 points and grabbed 16 rebounds, and Prince (13 points) scored 5 straight points late in the fourth quarter to thin the Bucks’ lead to three, before Jennings scored six points in the final 1:08 to ice the game for Milwaukee. The Pistons only lead of the game came in the second quarter, when they made an 8-0 run to take a short-lived one-point lead. The Bucks led by as many as 18 in the game, and are now 4-0 at home, but winless on the road, leaving them at 4-6 with a tough upcoming schedule (at Dallas, at Philly, home to Denver in their next 3). They played without Luc Richard Mbah a Moute for a fifth straight game with knee issues, and Beno Udrih sat out, too, but rookie Jon Leuer got his first NBA start and finished with 15 points (7 in the first quarter), 6 boards and 5 dimes. Rodney Stuckey made his return to the Pistons lineup with 11 points in 20 minutes off the bench, backing up rookie Brandon Knight, who scored 20.

Could this game have gone worse for the Knicks? The final score does not reflect how brutal the beatdown was last night in Memphis, as Rudy Gay got his swerve on with 26 points and Marc Gasol dominated down low (10 points, 12 boards, even 5 assists), while New York was out of sync from the get-go. OJ Mayo had 18 off the bench for Memphis, and at one point was matched up with former teenage teammate Billy Walker, which was fun. “Fun” it was not for Knicks fans, though. Rookie fan favorite Iman Shumpert shot 5-for-20 (12 points) and turned the ball over 6 times in 29 minutes running point for the Knicks, who shot 37 percent from the field as a team and never led. And Amar’e Stoudemire battled foul trouble to a 1-for-7 shooting night, good for 6 points. To make matters worse—hard to do, I know—Carmelo Anthony injured his ankle early in the third quarter and did not return. He finished with a team-high 14 points (well, Walker had 14, too) and according to Frank Isola of the NY Daily News, “X-rays on Anthony’s ankle were negative and his status for Saturday’s game against Oklahoma City is uncertain.” At one point in the fourth quarter, with the game far out of reach, Mike D’Antoni put the following lineup on the floor: Jorts Harrelson, Walker, Toney Douglas, Steve Novak, Landry Fields. It’s at that point that I assumed he was playing a prank on us, so I switched over to Kourtney and Kim Take New York. Hump!!!

Kyrie Irving vs. Steve Nash. Man, that was fun. And definitely the most underrated game of the night. Sure, neither of these teams will be a factor come late-season, but there’s nothing like a point guard battle between the 37-year-old class at the position and the 19-year-old next in line. The matchup lived up to the billing, too, as Irving scored 26 points (11-17 shooting) to lead all scorers, plus 6 assists, while Nash did more dishing—15 assists to go with 16 points. Kyrie set a new career-high in points despite having still played in less NBA games than college ones. He got help from the rest of the Cavs, who combined to hit 8 threes (Irving had 2) and shoot 53 percent from beyond the arc, while pulling down 15 offensive rebounds. For the Suns, Marcin Gortat notched another double-double (14 points, 10 rebounds) and Michael Redd made his return, finally, but Anderson Varejao had 17 rebounds and 8 points, and Kyrie made Cleveland’s offense tick, pushing the Cavs back to .500 at 5-5. You’ll get your next look at Irving under the bright lights of L.A. against the Lakers tonight.

The NBA’s been saving the best for last, huh? Seems like every night now, the late-night NBA option is better even than HBO alternatives at that hour. Mark Jackson is really trying hard to get us to notice him as a coach, and he did so last night by committing, 100 percent all-in, to the “hack-a-Dwight” strategy. It worked so well, in fact, that Dwight Howard broke the nearly 50-year-old record held by Wilt Chamberlain for most free throw attempts in a game. Superman made 21 of 39 foul shots. 39 free throws. In one game, for one guy. Look at it this way: the Washington Wizards made 26 field goals on Wednesday against the Bulls. Dwight Howard made 21 free throws last night against the Warriors. So how did Dwight deal with the extra special attention? All he did was go off for 45 points and 23 rebounds, becoming the dominant force for Orlando that he soon will be for another team we’ve all been expecting to see. Sure, he missed 18 free chucks, but Dwight more than made up for it with his hustle and his constant demand for the ball, despite the hack jobs. (Although his bricks from the line won’t help improve Orlando’s League-worst FT percentage.) Bottom line is, the Magic took home the win, behind Dwight’s effort, 52 percent team shooting, and 20 points and 9 assists from Hedo Turkoglu. It was a great game throughout, despite the constant stoppages to watch Howard’s awful form, with the Warriors getting big-time buckets from Monta Ellis as usual—30 points, 11 assists—and David Lee—26 points, 12 boards. Klay Thompson came off the bench to give GSW a boost, with 4 three-pointers and 14 points in all, but Dwight’s trips to the charity stripe stole the show. The drama continues, as the Magic travel to New York for a Monday matinee against the Knicks.

Line of the Night: I initially had Greg Monroe penciled in here, with his career-high 32 points (12-16 FG) to go with 16 rebounds, 2 assists, 2 steals, 1 block, but his team lost, and then Dwight Howard happened. Now, I find it as tough as anyone to stomach the 19-of-36 free throw shooting, but the Magic won, and dude put up the most ridiculous line of the season to date, posting 45 points and 23 boards. Honorable mentions go to Josh Smith, Steve Nash, Rudy Gay, Joe Johnson, Monta Ellis and Kyrie Irving.

Moment of the Night: One of many.

Weird Stat of the Night: The Bucks and Pistons combined to shoot a perfect 41-of-41 from the free throw line, only the second time that’s ever happened in the shot clock era.

Tonight: Wow, we’re already three weeks into the NBA season. Craziness. Thanks for rocking with me again the last five days, and be nice to Pete this weekend. He gets 11 games tonight to start things off, including Bulls-Celtics, Heat-Nuggets, Blazers-Spurs and the first of a potentially painful home-and-home for Philly and my Wizards. Peace!