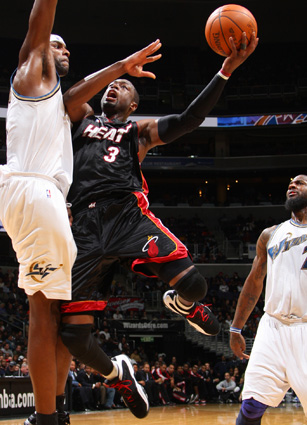 Woah, holy long night. I got home from the arena after filing my nba.com story on the Raptors/Pistons game just in time to catch the OT session of the Hornets and Mavs. I hate seeing Chris Paul look as frustrated as he has in the past couple of Hornets games, so I was rooting for them to get the W, but I couldn’t help but sympathize with the Mavericks and their tired legs from the night before. New Orleans outscored Dallas 17-10 in the extra session and CP3 got to be happy for the evening with the 114-107 victory.

CP3 also scored six of his 39 points in the overtime period. 39, five and seven for Chris on the night. It was Peja Stojakovic who hit the game-tying three to send the game into overtime, but that occured while I was walking through the door. I didn’t even get to see a highlight of the shot! I’ve been told, however, that the Mavericks dug their own grave late, with Jason Terry (35 points), missing a technical free throw and the Jose Juan Barea missing a pair of free thows in the final seconds, allowing Peja the chance to tie the game up.

One night after his huge 29-point fourth quarter, Dirk finished with a much more understated 12 points, shooting 4-of-15 from the floor.

The Raps took down the Pistons, but not before giving me and my game story writing soul a heart attack by allowing a 17-point third quarter lead turn into a one-point Pistons lead in the fourth quarter. They clamped down on the defensive end after that, but I was a stressed girl for a few minutes, thinking my story was about to be scrapped.

Andrea Bargnani had a career-high 12 rebounds to go with his 22 points and two blocked shots. Yes, he is a seven-footer and yes, 12 rebounds is a career-high. Our man Oakley spoke about Bargnani, saying someone that tall needs to be grabbing more than five boards a game. When Chris Bosh was asked about the statement, he said Oak has always been honest and he hopes Andrea heard him and will continue to focus on boards.

Ben Gordon is foolishly good on the offensive end of the basketball court. Anything inside of halfcourt is fair game for him. He started out with a ridiculous jumper, had 21 at half but slowed down in the second half, possibly due to fatigue, logging 45 minutes after playing the night before.

Antoine Wright and Jarrett Jack were two of the biggest difference makers in the game for the Raptors.

Austin Daye remains the skinniest NBA player in the world.

I know he shot 1-of-11 from three against the Pistons, but I’m still taking Ryan Anderson as my MIP this year. Yes, his minutes and role will be reduced when Rashard Lewis returns, but Orlando is just the perfect fit for him. Second year guy, hard worker, I’m rolling with him. 20 points and 10 boards for him this evening as the Magic bounced back from the loss against the Pistons to take down the road-weary Suns, 122-100.

Dwyane Wade went off for 40 against the Wizards, but I didn’t see any of it. The Heat won 93-89, Gil finished with 32, and the Wizards lost Mike Miller to a shoulder sprain. Get healthy, Wiz!

A slow start for the Nuggets was able to be brushed off as they woke up to take down the Nets, 122-94 behind 22 points from Melo, 16 points and nine boards from Nene and 23 points from rookie Ty Lawson, who looks nicer with every game. Chris Douglas-Roberts led the Nets with 19.

Dahntay Jones has been putting in work in Indy, scoring 19 points to go with 12 boards as the Pacers got the win against the Knicks, 101-89. David Lee had another big night for the Knicks, even in the loss, finishing with 20 points and 19 rebounds. Monster.

18 points and six assists for Rondo to lead all five Boston starters in double-figures as they hung on to escape with the 92-90 victory over the TWolves.

I’m just seeing NOW that I missed the Lakers take down Ariza’s Rockets in OT. Okay, okay, the team isn’t quite Ariza’s, but you know what I mean. Lakers win, 103-102 in OT, Kobe finishes with 41, Andrew Bynum had 17 points and 17 boards and Derek Fisher strips Ariza of the ball in the final seconds of overtime. Sounds like that one was a battle from start to finish. Wish I’d have gotten to see it.

ATL picked up their second win in as many nights, this time over the Kings. Joe Johnson scored 26 points as did Jamal Crawford, with six Hawks players reaching double-figures as Atlanta pulled away from the Kings in the fourth, outscoring them 30-18. Kevin Martin scored 29 and Jason Thompson added 22 points and 12 boards in the loss.

And with that, it’s time for me to hit the hay! Catch you in the a.m.