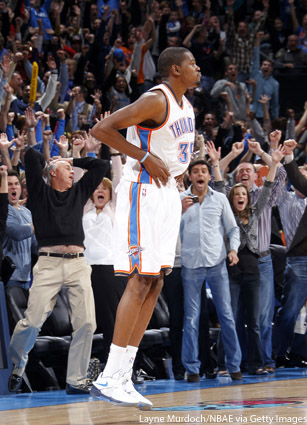 David Stern ought to kiss Kevin Durant smack on his forehead. KD is singlehandedly eliminating “the lockout effect.” And forcing everyone who chalked up his series of summer highlights as “streetball garbage” to eat their words. The Durantula is that dude right now, and Oklahoma City is must-see TV. What a way to end the first weekday stretch of NBA games, eh?

That’s more like it, Dwight. After a pair of sub-par games by his standards, Howard got back to what he does best, going for 24 rebounds and 16 points on 7-of-9 field goals (then again, he shot 2-7 on free throws), plus 3 steals, 3 assists and 3 blocks (1 into the third row, sorry Memo). Ryan Andersen led the team in scoring with 22, his second 20+ point performance of the year already, and JJ Redick chipped in 15 off the bench, as the Magic beat the Nets for the eighth straight time. Don’t look now, but after a blowout loss to Oklahoma City on Opening Day, Orlando is now 2-1, and get Charlotte, Toronto, Detroit and Washington over their next four.

As for New Jersey, the struggles continue. Rookie Marshon Brooks continues to look like a great late-first round find, scoring 17 points in 21 minutes off the bench. DeShawn Stevenson got 26 minutes of burn, and hit 3-4 three-point shots, but Anthony Morrow shot 2-10 and Deron Williams continued his slump, with just 10 points. Check out DWill’s first three games this season, in shooting percentages:

Yeah, not good. Think Dwight had a change of heart after seeing this Nets team up close and personal? Beyond Williams, New Jersey is home to the worst roster in the NBA. Feel free to nominate another team (Cleveland and Toronto seem obvious choices), but I’ll take the future Brooklyn club—Sundiata Gaines and Damion James were both in the starting lineup last night. And Kris Humphries, for all the hate, is frankly one of the most important pieces on the team.

Kevin Martin scored 25 points on 10-of-17 shooting and Kyle Lowry delivered with 16 points, 9 rebounds, 8 assists and 3 steals (and hey, a highlight!) as Houston blew out San Antonio a night after the Spurs gave the Clippers a beating. Look for this to be a trend for San Antonio—as we’ve said all along, the veteran teams around the League will have trouble with the condensed schedule, and will drop games like this. Tim Duncan and Manu Ginobili played 36 minutes…combined. The Rockets jumped out to a 13-4 lead as the Spurs clanked nine of their first 10 shots. By halftime, Houston led 53-35. New pickup Samuel Dalembert scored 9 points and had 4 blocked shots less than a week after joining the Rockets, while DeJuan Blair led the Spurs with 22 points and 12 boards. If you’re bummed I didn’t say much about this game, this guy’s got you.

WOW. Where to begin? Luckily for me, this one was on TNT, so most of you know what happened, sparing me the duty of dropping a 600-word play-by-play. But sheesh, that was a damn good basketball game. The Mavericks came in 0-2, and the Thunder 3-0, so when Dallas went up 17-5 in the first quarter, I was ready to roll with the “Mavs right the ship” and “OKC can’t win every night” narratives and talk a little about Delonte West’s nice contributions. But nah. Daequan Cook nailed a three to end the third quarter, then another jumper from almost the identical spot on the floor to open the fourth, and the Thunder held an 80-76 lead. Dirk Nowitzki kept the Mavs in the game thanks to 29 points and 10 rebounds, fighting off a ridiculous fourth quarter from Russell Westbrook—dude was hitting three-pointers, mid-range J’s, rebounding with a fiery passion—who looked like he was on a mission to prove last night was an aberration.

The last two minutes of the game were a blur: Dirk drilled a three-ball with 1:40 left to tie things up at 96, then was called for an illegal screen on the next possession, took exception and was nailed with a Tech. All of a sudden, a Westbrook bucket later and OKC was up 101-96 with 46 seconds left. That should have been your ballgame. Again, nah. Jason Terry hit a three-pointer off the dribble, Serge Ibaka missed two free throws (can’t happen), and then Vinsanity rose from the dead. That’s right, Vince Carter—yes, THAT Vince Carter—cashed a three with just over a second left to sink the Thunder. That is, until Kevin Durant made that old news with a 3 of his own: GAME, BLOUSES.

Things we will forget because of the final play include KD’s final line of 30 points (10-16), 11 rebounds, 6 assists, 2 blocks, 1 steal, the fact the Thunder got their fourth W despite turning the ball over 26 times (Dallas had only 12 TOs), Westbrook’s big fourth quarter and the time when Ibaka almost ate Vince. And made a very angry face.

Portland finished the game on a 13-4 run and moved to 3-0 on the season, strengthening the growing belief that this team is going to be a you-know-what to deal with in the West, especially considering how good Denver’s looked so far. The Nuggets forced the Blazers into 25 turnovers (only 7 for Denver) but Portland shot 52 percent from the field and made 21 of 23 free throws. The teams headed to half tied at 53 after Portland squandered a double-digit lead—thanks to the pesky play of Ty Lawson (8 steals) and the passing of Andre Miller (8 assists)—and traded the lead throughout the second half. Portland finally seized control when Wesley Mathews swiped the ball from Lawson with less than two minutes to play and found Ray Felton for three, giving the Blazers a seven-point lead. Felton finished with 23 points, Mathews had 25 and Jamal Crawford scored 22 off the bench, while Lawson led the Nuggs with 25 on 10-of-16 shooting.

The Kings are going to be in that category of fun teams that don’t win a lot this season, considering all the intriguing pieces on their roster, plus the fact that they are literally the youngest team in the NBA. The Bulls, on the other hand, are serious contenders. No way they were losing to the Warriors and Kings in two straight. Chicago ripped off 15 straight points early in this one and coasted to the win behind 19 points and 8 assists from Derrick Rose. CJ Watson had 9 assists, marking the first time two Bulls players had 8+ assists since 2006, and Chicago shot 54 percent from the field as a team. Carlos Boozer had himself a 16-point, 15-rebound night against DeMarcus Cousins, who scored 15 points and grabbed 12 boards—plus a pretty highlight against Joakim Noah. Unfortunately for Boogie, he ended the night with a better free throw percentage (7-8) than the rest of his team (59 percent). Marcus Thornton and Tyreke Evans combined for 39 points, but missed 9 free throws between them. Ouch.

L.A. is 2-2, having won their last two games by 42 points, and they get Andrew Bynum back on Saturday. Plus, their second unit—minus Lamar Odom—is starting to gel. Like when Steve Blake hit Josh McRoberts for what could have been the whitest alley-oop in NBA history. Kobe Bryant had an efficient night, scoring 28 points on 17 shots, plus handing out 6 assists (including this one), and making Renaldo Balkman look more stupid than usual on one particular play. Carmelo Anthony put up a 27/7/5 line, but the Knicks shot 32 percent as a team and 6-for-22 from three-point land as the Lakers took home the easy win. NYK opened the fourth quarter 0-for-3 with 5 turnovers in the first four minutes, and still were only down 11, but never came any closer. Reggie Miller tried his best to describe New York’s play on the offensive end, but couldn’t even finish his own sentence: “This Knicks offense, it’s one pass to Carmelo or Amar’e…” Stoudemire shot just 4-of-17 (15 points) and finished with a pitiful 2 rebounds. Two rebounds. In 30 minutes. The end.

Moment of the Night: Relive the ridiculousness.

Tonight: That’s it for me this week, ladies and gents. Had a blast opening the season with you all, and looking forward to what’s to come the rest of this season. My guy Peter Walsh will be holding down The Post Up over the weekend—while I’ll be icing my wrists, Kobe-style—so try not to hurt him. He gets to recap what should be some exciting games tonight: Miami-Minnesota (!), Bulls-Clippers late-night, and my woeful Wizards in between. Since I won’t be back until 2012, Happy New Year everyone, and be safe. See you Monday morning.