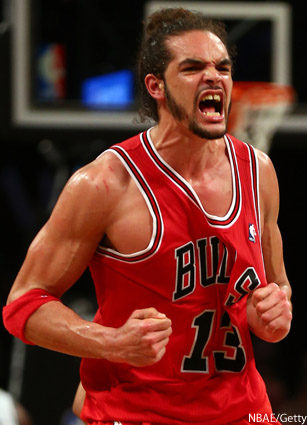 The Bulls center backed up his words with a historic performance of 24 points (12-17 shooting), 14 rebounds and 6 blocks, as the undermanned Bulls defended and rebounded their way to victory.

Chicago rode a 15-2 run late in the second quarter to take a 17-point lead into halftime.

“They played like they wanted to keep playing, like they didn’t want their season to end,” Gerald Wallace said. “We didn’t do anything in the first half.”

But Crash made sure the Nets did something in the third quarter, scoring 11 of his Playoff career-high 19 points on the night. Wallace hit three triples and flushed a thunderous dunk, and Brooklyn brought it within 82-75 in the 31-point period.

In the fourth quarter, noted Net killer Marco Belinelli (24 points, 5 boards) went Sam Cassell after a huge three to put the Bulls up 10.

A Deron Williams three brought the Nets within four points with 26 seconds left, but Brooklyn couldn’t knock down shots when they needed them most. But the Bulls did.

Belinelli calmly sank four free throws to wrap it up the 99-93 win.

“Our team has the belief that we can win every night,” Bulls coach Tom Thibodeau said.

Williams scored Brooklyn’s first seven points of the game and finished 24 points, 7 assists and 6 rebounds to lead the Nets. No Show Joe picked a bad game to shoot 2-14, including 1-9 from three and 0-5 in the fourth. He finished with 6 points.

Playing the entire 48 minutes for the second straight game, Jimmy Butler was stellar guarding multiple positions—holding DWill to 4-11 and Johnson to 0-5 when they were matched up.

Seldom-used Marquis Teague played crucial minutes during the Bulls’ hot second quarter. He made sound decisions with the ball in his hands and scored 4 points and dished out 3 dimes in the quarter.

“I’m so proud of this team,” Noah said. “We’ve been fighting through so much all year. All these experiences, I’ll never take those for granted.” —Ryne Nelson / @slaman10