The Pistons retired Ben Wallace's jersey number, then handed the Warriors their fourth loss of the season. 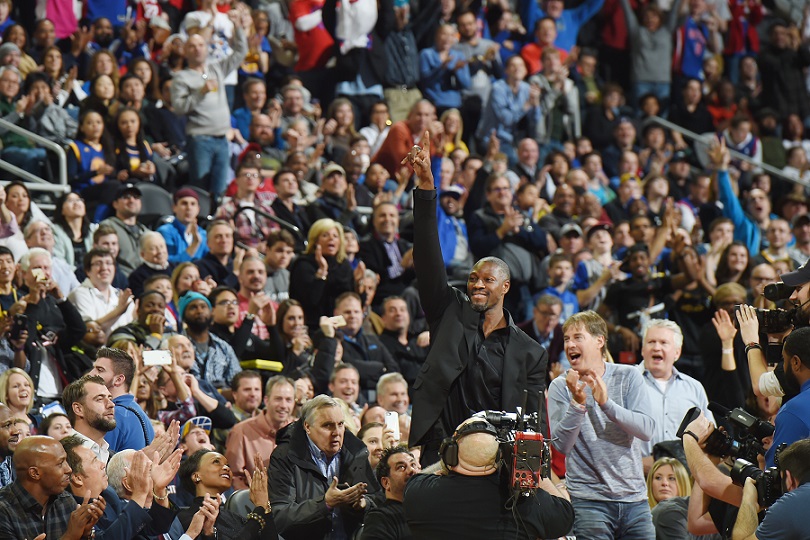 On a night when the Pistons honored an all-time great, the team stepped up with 46.5 percent shooting to derail the Warriors. Andre Drummond posted his daily double-double, while Reggie Jackson and Kentavious Caldwell-Pope added 20 each. Having now dropped two of their last three, Golden State showed chinks in their armor in Saturday’s defeat — Stephen Curry and Draymond Green got T’d up, while Andre Iguodala was held scoreless and Harrison Barnes posted five points on 2-of-11 shooting. 38 points and all, Curry can’t always be relied upon to carry the team single-handedly — particularly when every member of the opposition’s starting lineup scores in the double-digits.

Khris Middleton and Greg Monroe combined for 43 points, and Jabari Parker poured in 15 as the Bucks handed Charlotte their ninth loss in the past 10 games. Giannis Antetokounmpo continues to emerge as one of the league’s premier big men, as the Greek Freak notched his fourth consecutive double-double in Saturday’s win.

The Trail Blazers will have to rebuild after committing 13 turnovers in Saturday’s embarrassing defeat. With a fully healthy lineup, Portland got blown out by the 5-37 76ers, scoring as many points as Jahlil Okafor in the first quarter. Richaun Holmes and Robert Covington posted 17 and 16 points off the bench, respectively, while Okafor notched a double-double with 25 points and 10 boards.

Brooklyn’s chances of wooing Tom Thibodeau for the head coach job didn’t improve with Saturday’s shellacking at the Philips Arena. Paul Millsap’s 21 points and Dennis Schroder’s 15 points off the bench helped put this one in the bag early for Atlanta. Tim Hardaway Jr. even got in on the act with eight points over 23 minutes.

A tightly contested game — in which Isaiah Thomas (32 points), and John Wall (36 points) boasted breakout performances — was decided on a frenetically paced last possession. Jae Crowder put the Celtics ahead for good with a beautiful layup over Kelly Oubre, only for Wall to miss an open-look floater at the other end of the court. Crowder, who argued with Wizards coach Randy Wittman during the game, spoke about the bizarre player/coach interaction.

“I never had that happen in my time playing basketball,” Crowder said. “I never had an interaction with the coach. I feel like he was getting away with a lot of curse words and inappropriate words to me, and I retaliated and I got hit (with a technical foul). Tony (Brothers) said he didn’t hear anything from Wittman. I’m not going to outburst on a coach and say something like that for no reason.”

The Knicks weren’t without solid performances in Memphis; Kyle O’Quinn impressed with 15 points and five boards off the bench, and Langston Galloway notched a double-double. The team’s frontcourt, however, had no answers for Marc Gasol, as the big man torched New York for 37 points. Not one to be overlooked, Jeff Green contributed 18 points on 7-of-14 shooting off the bench.

Amid trade rumors, Rudy Gay dropped 18 points with seven boards on the Clippers, scoring in the double-digits for the eighth straight game. J.J. Redick went off for five shots from downtown, and Jamal Crawford scored 20 off the bench, but ultimately the Clippers had trouble competing without DeAndre Jordan in the lineup. Cole Aldrich didn’t pull a Wally Pipp in his spot start at center, but the big man still impressed with 19 points and 10 boards.

In the aftermath of Kobe Bryant’s announcement that he would sit out the U.S. Olympics, the Black Mamba departed Saturday’s game with a sore right Achilles. D’Angelo Russell, Lou Williams, and Jordan Clarkson each scored in the double-digits, but otherwise had few answers for the Jazz. Rudy Gobert made a run at Hassan Whiteside’s line from Friday night with 18 points, 18 rebounds, and five blocks, while Trey Lyles followed up his career-high 19-point outing on Friday with 17 points and nine boards. What’s more, with the ink still drying on his 10-day contract, former San Diego State Aztec J.J. O’Brien made his NBA debut by logging four minutes with a rebound and steal. Welcome to the L, J.J.!