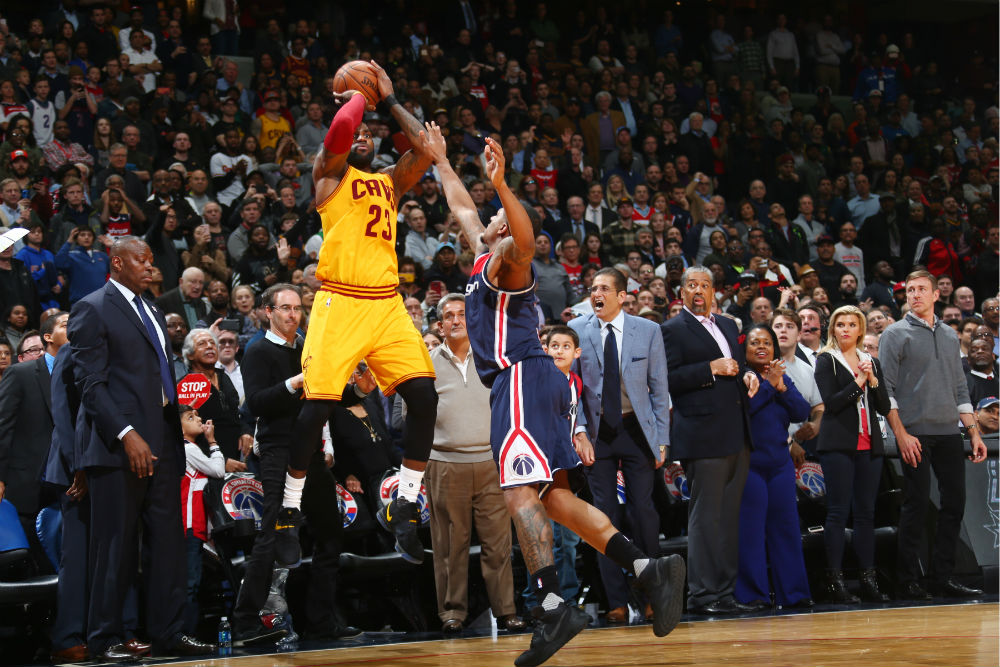 The Knicks struggled from the opening tip, losing the first quarter 29-19 and never really making it a game. At one point in the third, Los Angeles led by 27 points. Seven players scored in double digits for the Lakers, led by Louis Williams’ 22. Carmelo Anthony, who was at the center of a rather startling report tonight (that was later denied), had 26 for New York. It’s been a rough season for Phil Jackson’s squad.

What a game. After missing a gimme layup that would’ve given his team the lead late, LeBron James redeemed himself by knocking down an insane fadeaway game-tying three in the final seconds. Less than a minute into OT, the King fouled out for the first time since January 2014. He finished with 32 points and a career-high 17 assists.

Then it was Kyrie’s turn. The SLAM All-Star cover star dropped 11 in OT, including a tie-breaking long ball that was reminiscent of his Game 7 dagger:

Uncle Drew does it again. pic.twitter.com/C40rjJZeUa

Kevin Love was huge as well, posting 39 points on 11/17 from the field. Bradley Beal led the Wiz with 41. Their loss snapped a 17-game winning streak at home.

Indiana trailed by 11 at halftime, but fought their way back with a big third quarter (32-18). Overall, they held the Thunder to just 38 points in the last two periods. Paul George did his thing, scoring 21 points and grabbing 8 rebounds. Russ put up big numbers again (27p/18r/9a), but struggled mightily from the field (10/27) and missed two three-pointers in the final 10 seconds that could have sent the game to OT. The Pacers have won seven in a row.

After missing seven of the last eight games with a sprained ankle, DeMar DeRozan went off for 31 points on 11/22 shooting, helping the Raps secure their 32nd victory. Blake Griffin notched his fifth-career triple-double (26p/11a/11r) in the loss. The Clips have now dropped three in a row.

Utah shot a season-high 61.3% from the field and cruised to a win over Atlanta. Things really broke open in the third, when the Jazz connected on an absurd 16/20 shots, taking an 18-point lead into the final period. Gordon Hayward led all scorers with 30 points on 12/18. That’s three Ws in a row.

Seven Detroit players scored in double figures as they rolled to a 17-point victory over the 76ers. Andre Drummond was particularly impressive, putting up a monster double-double (16p/17r). After a hot stretch, Philly has struggled without Embiid, who has missed their last six with a knee injury.

New Orleans ended a four-game skid thanks to 34 points from Anthony Davis and 30 more from Jrue Holiday. Phoenix led for most of the fourth, but a late 8-2 run helped the Pelicans regain control. The difference was probably the Suns’ poor shooting from deep, as they connected on just 5 of their 27 three-point attempts (18.5%).

Miami cannot be stopped. That’s eleven wins in a row.

Goran Dragic poured on 33 points, nailing a career-high seven three-pointers on just nine attempts. As a team, the Heat shot 53.6% (15/28) from behind the arc. KAT had a game-high 35. Wiggins, who finished with 27, had a chance to tie this one in the final seconds, but missed a fallaway on the baseline. Minnesota has lost four consecutive.

The Nuggets were without three starters (Gallinari, Mudiay, Faried), but still managed to dominate at home. It was Will Barton who put the team on his back, posting 31 points, 8 rebounds, and 5 assists. The Mavs had won four in a row before suffering this defeat.

Memphis took advantage of the Leonard-less Spurs, holding them to a season-low 74 points on just 36.6% from the field and 21.1% from deep. I mean, look at 40-year-old Vince Carter protecting the rim:

Things got a bit heated in this one, as an argument over a technical foul led to an altercation between Kings’ players and a Bulls’ assistant coach:

Things got heated in Sacramento 😳 (via @BleacherReport) pic.twitter.com/wQfB8skpsb

When the smoke cleared, the Bulls were able to survive an incredible Sacramento comeback thanks to the heroics of Dwyane Wade (31p). After Demarcus tied the game at 107, Wade hit the go-ahead jumper with 13 seconds remaining. He then stole the ensuing inbounds pass and sealed the outcome with a breakaway slam.

D-Wade wins it for @chicagobulls!