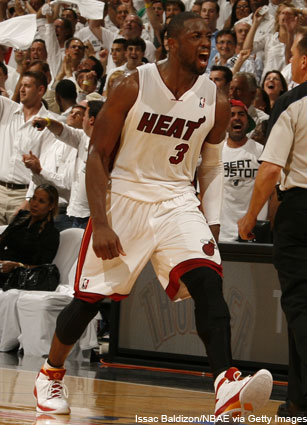 First it was Wade. He landed body blow after body blow, singlehandedly willing Miami with tough shot after tough shot. The bedraggled Celtics stood tall, and fought through injuries with a bench fueled surge in the fourth. After a jumper from Krstic put the Cs up six, it looked like they might just have enough moxie to force a Game 6.

But then in the blink of an eye, Miami up and knocked Boston out.

King James landed the decisive blows leading Miami on a 16-0 run to close the game out. Bron Bron scored 13 of his 33 points in the fourth quarter including the last 10 points of the game. The surge included two absolute daggers from deep from LeBron. On his second three of the sequence, which put Miami up six with 40 seconds, Bron made sure to hold his pose that was oozing with redemptive swag.

When the dust settled, LeBron and Wade, the two best players in the series and arguably in the League, shared an emotional embrace on the court, savoring their 97-87 triumph over their bullying big brother. James and Wade combined for 67 of Miami’s 97 points. Bosh chipped in with 14 and 11 including a big dunk during Miami’s end of game surge.

Garnett led the Celtics out of the gate with 12 first quarter points but was relatively unheard from afterwards. Ray Allen had a team high 18 points including five threes and their bench was playing well behind strong efforts from Krstic and Delonte West. In the end, sloppy play and careless turnovers doomed Boston.

While Boston played some of their worst ball of the season this series, Miami on the other hand seems to be peaking at just the right time. Dominating defensive efforts and better chemistry between their stars adds the critical substance to their abundant style and hype.

“I didn’t like it,” Doc said of the media circus that was the Heat season. “It helped them. It allowed them to go through something and prepare them for the Playoffs.”

Indeed it looks like we are now all witnessing a monster that is partially of our own creation. Now that they’ve finished their lunch, the Heat looks as hungry as ever and primed for a deep run.

I suppose the world order was temporarily restored Wednesday night in Oklahoma City. The Thunder won convincingly, Kevin Durant took the most shots, and the Grizzlies finally played, after over three weeks of divinity and overachievement, like an eighth seed. Actually, they played much worse than that: one starter in double figures, smashed on the boards, and a measly offense that produced just 72 points.

On second thought, did the game in fact restore order? Maybe tonight was the aberration.

This one got out of hand quickly in the second quarter when the Thunder unleashed one of those spurts they’re so capable of at home, when the crowd lifts the young athletes and momentum runs like an avalanche. It was 16-4 in all, enough to change the game completely, turning a deficit into an 11-point cushion and a lead that didn’t relinquish.

Durant (19 points) was finally efficient, and didn’t succumb to over-shooting in wake of constant analysis over Westbrook’s attempts rate. Russ was somewhat controlled, too, doing just enough in 25 minutes (11 points, 6 assists, and 3 turnovers) to let the bench finish things late. Speaking of, Thunder reserves produced 53 points—well over half the team’s output—and allowed the starters watch it end.

Mike Conley suffered from a little Westbrook-itis himself, 16 shots at a poor rate while Randolph and Gasol were both left with 9 attempts each. But even that mattered little—the Grizz appeared sluggish and tired; a team that looked like it needed a home crowd jolt will find it when it returns home for Game 6, finally with their backs to the wall and, wouldn’t you know it, in the second week of May with L.A., Boston and San Antonio all done.

An anxious Thunder will look to close against a Memphis team that hasn’t given us a reason to doubt them. Should be fun.