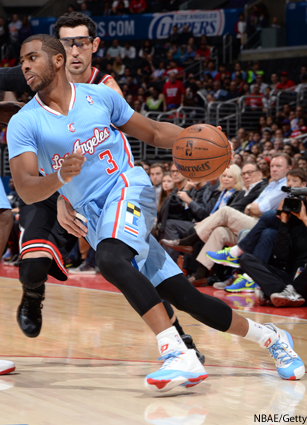 Detroit used a big third quarter and a big game from sixth man Rodney Stuckey (team-high 27 points, 6 assists) to take down the hapless Nets. Greg Monroe (18 points, 11 rebounds) had his seventh double-double of the season and Andre Drummond (9 points, 10 rebounds) grabbed double-digit boards for the eighth straight game. Brooklyn had a 7-point lead going into halftime, being led by Joe Johnson (34 points, 12-18 shooting from the field) the entire night. Then, winning the third quarter 34-15, the Pistons shot 66.7 percent from the field while the Nets shot 26.3. This has been a common theme for Brooklyn this year as they have been outscored by 5.2 in the third quarter and by 7.1 in the second half. They aren’t playing defense and the shooting woes of Kevin Garnett (4 points, 9 rebounds, 2-9 shooting from the field) and Paul Pierce (9 points, 5-13 shooting from the field) isn’t making life easier on the offensive end of the court. Even though Brandon Jennings (14 points, 10 assists, 2-10 shooting from the field) continues to give reason why he has lost confidence in his shot, he looked more in control of the offense. Then again, it was against the Nets, a team searching for some sort of identity.

The post-Rose era of 2013-14 has begun. And it began with a scary sight for Bulls fans. Leading by 42 points at one point, the Clippers did everything better than the Bulls Sunday night, shooting 58.5 percent from the field. Joakim Noah (8 points, 4 rebounds) scored the first points of this game, but after that, Chris Paul (16 points, season-high 17 assists) and the Clippers won all four quarters, outscoring the Bulls 56-30 in the second half. The Bulls looked like they never had a chance in this game and didn’t seem to have any interest in playing any sort of defense. Without Nate Robinson to save possession after possession, this team now lacks any sort of playmaker. The Luol Deng (22 points, 6 assists) trade rumors might grow more and more if these type of performances become a frequent thing. CP3’s Clippers offense looks very strong and very fluid with Blake Griffin (15 points, 12 rebounds) getting another double-double and Jared Dudley (21 points, 8-10 shooting from the field) having one of his best games of the year. If Doc Rivers can get this team to start playing defense for 48 minutes a night, this deep offense could lead to a possible Playoff run.

Without Eric Bledsoe, Goran Dragic (23 points, 13 assists, 0 turnovers) took command of this game and gave his team the perfect performance in terms of what an NBA would want from their point guard. He controlled the pace and flow of the game, failing to turn the ball over once and hit a clutch late-game 3-pointer over big man Nikola Vucevic (20 points, 10 rebounds) to put this game away. Channing Frye (14 points, 7 rebounds) also came up big down the stretch as he and Dragic combined to score the final 11 points for the Suns. Gerald Green (20 points, 8 rebounds) has been an offensive force when Bledsoe has been out. In the last four games during Bledsoe’s injury, Green is averaging 20 ppg. For the Magic, sixth man Andrew Nicholson (19 points, 8 rebounds, 3-4 on 3-pointers) played efficiently while the Morris twins combined to score 28 points and grab 13 boards off the bench. Tobias Harris (6 points, 3-8 shooting from the field, 16 minutes) looked rusty in his return but should find his rhythm soon. The Suns found a way to win this game while shooting only 3 free throws the entire game…and only making one of those.

This game looks much closer than it actually was. If it wasn’t for Rudy Gobert (10 points, 3-3 shooting from the field) coming alive in the fourth quarter, when he scored all of his points, and the Westbrook-less Thunder easing up on the gas pedal, the Jazz might not have reached 60 total points for the game. Kevin Durant (19 points, 9 rebounds), Serge Ibaka (17 points, 11 rebounds, 8-13 shooting from the field) and Oklahoma City led by 37 points in the third quarter and pounded the boards all night, outrebounding Utah 46-33 . Jeremy Lamb (15 points) and Perry Jones III (13 points) gave the Thunder coaching staff hope that they might have some dependable scoring off the bench and even more youth to develop. Then again, anything positive that happens against Utah should be taken with a grain of salt since it probably has more to do with how bad the Jazz actually are. Replacing Enes Kanter (10 points, 3 rebounds) in the starting lineup, Trey Burke (4 points, 4 assists, 2-9 shooting from the field) still hasn’t been able to shoot the ball efficiently since playing in the preseason for Utah. The Thunder have a big game at home Wednesday, facing the 12-1 San Antonio Spurs.

Everyone take a deep breath really quick. Mike D’Antoni has his Kobe-less Lakers legitimately playing defense. It might have been the always-hapless Kings, but Los Angeles still held them to 86 points on the night and only 3 points over the final 7:16 of the third quarter. In the last six games, L.A. is allowing 97.9 points per 100 possessions, good for fifth best in the NBA. There isn’t one specific player anchoring this defense; they are all simply committing to the defensive end of the floor, making it seem as though D’Antoni actually deserves some credit. The Lakers bench outscored the opposing bench for the 13th time in 14 games this season, led by Xavier Henry (21 points), who scored 12 of his points in the fourth quarter. Pau Gasol (20 points, 10 rebounds) remained the constant force for this team while Greivis Vasquez (20 points, 7 assists) might have had his best game of the young season. DeMarcus Cousins (17 points, 8 rebounds, 7 assists) had flashes of brilliance, but how much longer before he is no longer considered “just a young player developing” and instead viewed as a “potential-filled problem”?