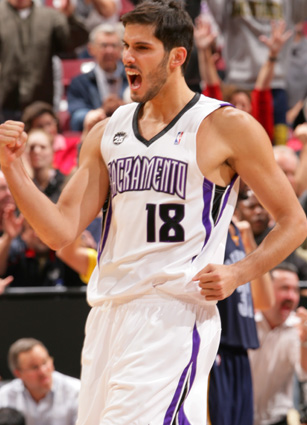 Memphis Grizzlies in Sacramento to take on the Kings.

Rudy Gay playing for an extension.

The Kings? They were playing for their first win of the season.

Bet you didn’t expect the late night matchup between the Kings and Grizz to be the game of the week, did you? I was amped to watch Ivy, always love watching Mayo and of course, wanted to check out Tzvi’s boy, Casspi. Didn’t know what I was in for until the Grizz were saved in regulation by Zach Randolph -of of all people– forcing overtime. While the entire fourth was a back and forth seesaw, the Kings broke away in the extra session, particularly when Randolph picked up his sixth foul and was sent to the bench,  outscoring the Grizz 17-6 in the extra session.

Kevin Martin was fantastic, scoring 48 points on 14-of-27 field goals. Spencer Hawes had 21 points, 11 rebounds and seven assists off of the bench and Beno Udrih added 16 as the Kings bench more than made up for their starting five outside of Martin, who managed just 12 points combined.

The Grizzlies wasted a 30-point, 16-rebound effort from Randolph as Marc Gasol had 16 points and 16 boards, Gay added 21 points and 13 rebounds and Mayo had 22.

Bizarro stat of the night: The Kings won despite being outrebounded 57-44, but they also had 14 made three-pointers to the Grizzlies four.

Crazy game and I just didn’t want it to end.

While this one was going into overtime, the Clippers managed to win their first game of the season, picking up a 93-90 victory over the Minnesota Timberwolves that came down to Corey Brewer taking a rushed three and missing. Al Jefferson had 24 points to lead the Wolves while Chris Kaman led the Clippers with 25 points and 11 rebounds while Eric Gordon had 17.

With those two games being so great, it was almost possible to pretend that the NJ Nets and Charlotte game didn’t even happen. With the Bobcats having eight made field goals in the entire first half and the New Jersey managing to score just NINE points in the entire third quarter, it wasn’t a pretty one. The Bobcats somehow managed to win 79-68, but that only happened thanks to a 24-0 run as the Nets forgot how to play basketball and went more than 11 minutes without a field goal. It was so very ugly.

The positive? There were so many clanged shots, Gerald Wallace ended up with a 24-point, 20-rebound performance for his fantasy owners.

The Knicks put in another 40-point fourth quarter, outscoring the New Orleans Hornets by 10 in the final period to take the 117-111 victory at home last night. Chris Paul had 32 points and 13 assists, Emeka Okafor scored 24 points to go with 10 rebounds and David West added 21, but it wasn’t enough to combat the 28 points from David Lee, 24 from Al Harrington, 20 from Larry Hughes and 18-point, nine assist night from Chris Duhon.

Just one game after my guy Trevor Ariza had a career-night, the Rockets pulled out another victory, this time against the Utah Jazz. It was Aaron Brooks to step up last night with 19 points and nine assists, but the Rockets had eight players reach double figures. Impressive for a team missing so many pieces. Luis Scola added 14 points and 15 boards and rookie Chase Budinger had 17 off of the bench. Mehmet Okur led the Jazz with 21, Ronnie Brewer scored 19, Andrei Kirilenko added 18 as did Deron Williams who had the saddest face of life while sitting on the bench watching the clock run out.

It’s only early, yes, but we are officially one week into the young NBA season. Love it.

Bet Brandon Jennings is the answer for some.