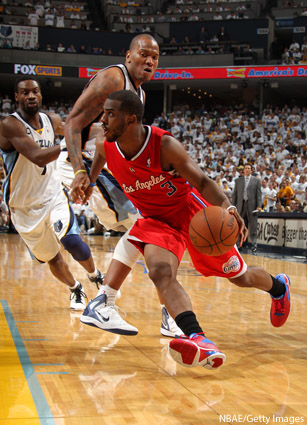 OK. This team has guts.

The Clippers dug themselves a hole the size of a damn space ship (that’s ten Hamed Haddadis) twice this series. They scrambled out of them both times with tools nobody knew they had down there. And by down there, I basically mean balls.

The Clippers suffocated the Grizzlies last night when they needed to. LA gave up four points in the last three minutes in a close Game 7. None of them came on field goals. Los Angeles beat Memphis, 82-72. They put a lesser horse out to pasture like grown-ass men, then they smoked a cigarette, stole the Grizzlies’ wives and drove to Texas in a truck with a nickname. They won the series 4-3 and they’re advancing to the Western Conference Semifinals.

Turns out they needed that 26-point comeback in Game 1 to advance. It gave them character. I’m not sure they needed to lose two elimination games, up 3-1 and heading home, but you can chalk that up to the “character” thing, too, if it helps you sleep better at night.

It looked shaky there for a minute. The first quarter felt like a series of loose balls and confused shots late in the shot clock. Memphis scored two points in a five-minute stretch in the middle of the first quarter, but L.A. couldn’t really capitalize. There was no pace, no rhythm, and the Clippers are a rhythm team.

Or that’s what we thought.

This Clippers supporting cast? They just adapted. All of those stray guards that L.A.’s been hoarding all season filled in points when they were hard to come by. Mo Williams was probably the best at it. He was hitting jumpers, yep, but he was tossing in teardrops he hasn’t hit since he was sad in Milwaukee. Then a Foye jumper and a Young jumper and a Bledsoe jumper.

Chris Paul found them all, then he took over when it was falling back into Memphis’ game in the middle of the third. A Rudy Gay jumper over a smaller defender for the lead? Fine, Paul will invent some free throws for himself. Did Marc Gasol get an eternity to take a set shot because of a missed assignment? CP will create two more 15-footers to make up for it.

This guy knows so much about basketball it’s making Nick Young look like a biochemist by association.

And now it looks like this team has an identity.

Young is going to get off the bench, shoot four shots, shoot four more if the first four looked good, and then he’s going to show up to the press conference room looking like he’s in the movie “Heat.” Kenyon Martin is the wizened veteran who was on the last Great Lob Hope that didn’t win a championship, and now he’s content beating the hell out of people for rebounds to see if that will work any better than the first time. Eric Bledsoe is the first guard off the bench on a top-4 team in the West all of a sudden. Reggie Evans is a revelation, a crunchtime player, and he’s about to be bathing in money. Blake’s going to score 40 in one of these games once he gets it clicking.

Then there’s Paul at the middle of it doing magic, directing traffic by breathing fire.

These aren’t the fun-as-hell Lob City Clippers that you showed your girlfriend three months ago.

They’ll try to go outrun the Spurs now. Or outhustle or outfight them. Any of those can work. They’re not going to be favored, and maybe they shouldn’t be, but who the hell would want to bet against a team that just figured out how good they are? —Ben Collins

Erik Spoestra found himself in a situation that very few coaches covet. Down six at half with your All-Star power forward leaving the game due to an injury, he knew the only chance the Heat had at winning the game would come from the League’s MVP. Spoestra directed a few clear words to his newly-touted MVP winner that set the tone for the rest of the game. “I just looked at him straight in the eyes and said, ‘You can flat-out not get tired, period.'”

If LeBron James felt tired at any point in the second half, he fooled the crowd with his look. 32 points, 15 rebounds, and 5 assists later, LeBron fueled a short-handed Heat win to set the tone for the series. Losing Game 1 at home to an inferior opponent would only re-open the skeletons in the closet for LeBron about him not being able to close out a game or win when it matters most. This time, however, the Heat made the necessary adjustments to take control of the series.

The “necessary adjustments” essentially became give the ball to Lebron and Wade and get out of the way. LeBron poured in 16 fourth-quarter points, knocking down jumpers at every crucial point in the last few minutes. Wade finished the game with 29 points and physically outmuscled his way to the hoop all night long, especially when a smaller guard like Darren Collison or George Hill ended up switching onto him. LeBron and Wade essentially imposed their will on the Pacers and outscored the entire Pacer team in the second half by themselves, 42-38. What’s even crazier is the fact that the Heat did not make a single three-pointer all game. They scored 95 points off two-point field goals and free throws.

The Pacers got a disappointing outing from leading scorer Danny Granger, on both ends of the floor. His 1-10 shooting performance simply will not be enough to beat what most people consider to be the League’s premier team right now. As expected, however, the Pacers front line came up big throughout the night. David West and Roy Hibbert both went 6-12 from the field, both went 5-6 from the charity stripe, and finished with 17 each. West grabbed 12 boards while Hibbert brought 11 down.

A positive for the Pacers will be the fact that Paul George and Granger combined for just 13 points and still Indiana only lost by 8. Their lack of offensive production will almost certainly not happen to that extreme again. However, this series may not make it back to Miami after next weekend if the Pacers don’t find a way to at least slow down the “Big Two.” Completely shutting down both Wade and LeBron seems impossible at this point, but not allowing them to singlehandedly score more than an entire team may be a starting point for Game 2. —Dave Spahn (@DaveSpahn)