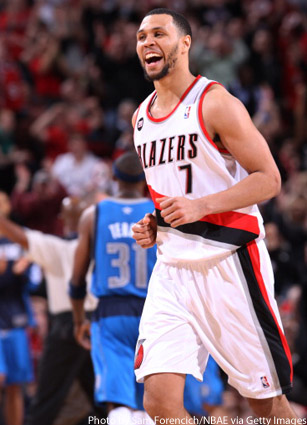 After three close and very winnable games, the Indiana Pacers finally pulled out a victory over the Chicago Bulls in Game 4, avoiding a sweep and living to play another day. It was obvious by their intensity that they weren’t ready to go fishing just yet. And sometimes, it’s better to be lucky than good.

The luck part came on a Derrick Rose sprained ankle.

On one of his signature drives to the basket, Rose inadvertently rolled his left ankle to the outside, incredibly finishing the shot before coming down in obvious pain and limping and motioning to the sidelines to take him out. After a timeout, Rose was taken to the locker room area but came back a short time later and tried to demonstrate that his ankle was fine by throwing down a vicious two-handed tomahawk jam off a backdoor cut, leaving Dahntay Jones in the dust.

But it was the only highlight of the night for Rose who was clearly favoring his ankle by shooting jumpers, all of which were just short.

True to form in this series, the Pacers almost suffered another epic collapse. After leading by 13 points with just over two minutes to play in regulation, the Pacers once again watched a large lead over the Bulls evaporate and they came within a just short 3-point attempt by Carlos Boozer off a broken out of bounds play to having all of the air in the Conseco Fieldhouse sucked out in a virtual vacuum.

Brandon Roy had been down. Brandon Roy had been counted out. Brandon Roy had even been reduced to tears because his role on his team—The Portland Trail Blazers—had been significantly diminished since coming back from arthroscopic surgery on both knees in January. There were even times, according to Roy’s post-game presser, that he didn’t even know if he was going to play basketball again.

But in one day, in one game, in one quarter, the whole world knew that the three-time All-Star still had the most important body part needed in sports: heart. Even if you hate the Portland Trail Blazers, if you love basketball, you stood up and cheered for Brandon Roy as he engineered an 18-point fourth quarter to cap an improbable 23-point second half comeback for an 84-82 victory over the Dallas Mavericks to even the series at 2-2.

It was meant to be, but it wasn’t supposed to be. It was an epic collapse by Dallas, who for three quarters played outstanding basketball behind a 16-4 run that made it 64-41 on a three ball by Peja Stojakovic. Add to that the fact that Portland couldn’t buy a bucket at the start of the third and the stage was set for the Mavs to keep the fans quiet.

But then, when it mattered most, Roy went to work. It was like seeing a constant flashback, replayed over and over and over. Roy slashed into the lane for floaters, nailed step-back J’s and when he drained the 3-pointer, drew the foul and finished the And-1 to tie the game at 82, it was written.

Roy finished with a game-high 24 points and LaMarcus Aldridge added 18. Dirk Nowitzki had 20 points to lead the Mavericks and Jason Terry added 13 off the bench.

Now that the Blazers have made it a series, they have to go back to Dallas. If the Mavs want to shake their supposed curse of the 2006 Finals, now is the time to do it. They absolutely need this win on Monday to avoid forever being considered only paper, regular season champs. On the other side of the fence, if Portland pulls out another win, they’ll only add to the lore of these and all future NBA Playoffs. Either way, as basketball fans, we win. —Maurice Bobb

Confucius imparted a bit of wisdom on his deathbed. Live by the three, die by the three. I think he was talking about concubines, but whatever. The saying applies just as well to San Antonio’s performance Saturday.

Coming off a game in which they made 7 of 17 shots beyond the arc, the Spurs were just 2 of 15 from three in Game 3, leading to a listless 91-88 road loss to the Grizzlies.

The Grizz were hardly Terminator-level executors themselves (there were enough turnovers down the stretch to stock a Martha Stewart tea party), but they played well enough to win.

As usual, Zach Randolph and Marc Gasol were the go-to guys for Memphis, scoring 25 and 17 points respectively. Z-Bo even hit a big three down the stretch, which is something I never thought I’d see in print, but, hey, more power to him right?

Mike Conley continued his consistent play with 14 points, 8 assists and 3 steals. Meanwhile, Tony Parker had more turnovers (6) than assists (5) and missed 9 of 14 shots, proving once again that his Finals MVP award should be right next to Halle Berry’s Oscar for Best Actress in the “Awards Under Contention” Hall of Fame.

Manu Ginobili continued his inspired play with 23 points and 5 assists despite an attempted rape in the third quarter at the hands of Tony Allen. Allen later fouled out, completing a karmic circle that I imagine made Bill Walton smile.

Bench play favored the Grizzlies, whose reserves outscored San Antonio’s 28 to 24. That and the interior play of Gasol and Randolph were the major advantages for Memphis, who won for the first time ever at home in the playoffs and now hold the advantage over San Antonio 2-1. —Patrick Crawley (@BasketballFiend)

Roughly sixty years of Playoff history suggests that Oklahoma City has already won its first round series with Denver. The Thunder won this one 97-94 and moved within a game of a surprise sweep with more scrap and less aesthetic pleasure than what we’re accustomed to, countering a low shooting percentage (36 percent) with a low turnover count (9), while relying on typical yeoman’s work from Serge Ibaka (22 points 16 rebounds).

Kevin Durant had a messy 26 points, needing 34 shots (22 from the field, 12 from the line) to get there, but his big assist to Ibaka in the final half-minute sealed the win—it was a star play, one that further separates from even flirting with the idea that he’s one-dimensional. Durant had never won a game in Denver entering this month; he’s now won there twice.

Russell Westbrook was present and accounted for in the first and fourth quarters, went missing in the middle two, and yet somehow almost pulled off a triple double (23 points, 9 rebounds, 8 assists). For the Thunder to endure such poor shooting and still find a way to win a road playoff game says plenty about their maturation and development.

Denver started Arron Afflalo instead of Wilson Chandler, and he gave them an early boost. For the first time in the series, Denver’s bigs had a distinct advantage, with Nene, Kenyon Martin and Chris Andersen all in double figures while getting OKC’s bigs in foul trouble. It all went for naught. The Nuggets got nothing from its points, statistically or energetically, as both Lawson and Felton struggled. What resulted was just the third time they’ve scored less than 100 at home since late January.

So what was expected to be a long and eventful series has instead turned one-sided. Oklahoma City is looking more ominous with each win. —Todd Spehr