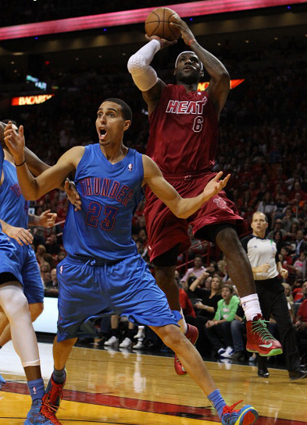 Happy holidays, everyone! Tuesday’s recaps are coming right up, but first, a Public Service Announcement: If at some point this post abruptly ends it’s because in a sudden outburst of rage triggered by hearing Justin Bieber sing “pa rum pum pum” for the 439th time today I’ve hurled my computer at the TV.

Nets fans deserved better today. The entire organization needs to work harder to find the solution. We will get there.

Remember when the Nets were 11-4 and the new darlings of the NBA and a team so fun and exciting and cool that some thought they may actually be able to steal some fans away from the Knicks? ‘Twas the time. Now, after suffering their ninth loss in 12 games, the Nets find themselves focusing on smaller things, like staying above .500 and keeping themselves in the Playoff hunt. And keeping their jobs, something that the above tweet from Nets CEO Brett Yormark shows Avery Johnson may want to start worrying about.

Right now, the Nets are just not a very good team. They made that abundantly clear to a national audience Tuesday against the Celtics. They’re average defensively and starting Gerald Wallace at power forward has done nothing to increase the offense’s fluidity. Playing in their home gym, against a relatively mediocre defense (Boston was 12th in the League in defensive efficiency coming into the game) Brooklyn shot just 40.6 percent from the field and turned the ball over 20 times. Deron Williams (10 points on 3-7 shooting, six assists, four turnovers) once again looked average, which is the exact thing a $100 million man is not supposed to look like on the court. The same can be said for Joe Johnson (4-14, 12 points).

As for Boston, Tuesday’s victory over the Nets was sparked by a couple of new contributors: Jared Sullinger (16 points and seven rebounds) and Jeff Green (15 points). Rajon Rondo also had 19 points (including 2-2 from the behind the arc), six assists and five rebounds and Paul Pierce dished out 10 assists to make up for his eight points. But the standouts were Sullinger and Green, two players that are going to have to become consistent contributors if the Celtics plan on making any sort of Playoff noise.

It turns out that getting two future Hall-of-Famers like Steve Nash and Pau Gasol back on the court can actually make a team a lot better and solve many of its issues. Who would have ever guessed? Tuesday at the Staples Center against the Knicks we saw the Lakers play like the team that everyone expected them to be at the beginning of the season as they won their fifth straight game. They shot 48 percent from the field and held the Knicks, one of the best offensive teams in the League, to 43 percent shooting. Kobe scored 34 points on just 24 shots. Dwight Howard had 14 points and 12 rebounds and actually displayed some quickness and athleticism on the defensive end. Steve Nash had a typical Nash game: 16 points, 11 assists, 7-12 from the field and one incredible floater which you can watch below. Metta World Piece added in a surprising 20 points.

The interesting part of the game was the offense that the Lakers ran in crunch time. There were no Kobe isolations or tough fade-aways. Instead, Los Angeles ran pick-and-rolls with Steve Nash and Dwight Howard. Most would agree that putting the ball in Nash’s hands at the end of a game and having him run pick-and-rolls with one of the best rolling big men in the League is a smart strategy. The fact that the Lakers, and, more specifically, Mike D’Antoni, had the marbles to do so is what’s a bit surprising. It’s also something that should excite Lakers fans and make them feel good about where this season is headed.

For the Knicks, it was an ugly game. They were 9-16 from the free-throw line and 9-26 from behind the 3-point line. Tyson Chandler fouled out. Raymond Felton was just 5-19 and was the conductor of a few bonehead late-game possessions that contributed to the Knicks scoring just 16 points in the fourth quarter. Carmelo (34 points on 23 shots) and JR Smith (25 points) shot well, but given the rest of the team’s struggles, their efforts just weren’t enough. Also, about those bright orange uniforms…

The two best teams in the NBA and two best players in the NBA faced off in Miami on Tuesday and, just like last summer, LeBron and the Heat walked off the court as winners. For Thunder fans, yesterday’s Christmas loss had to bring back bad memories of justtttt coming up a bit short. The big play came at the end of the game when a defensive lapse by either Kevin Durant or Kevin Martin on the weakside (it was hard to tell which of the two was responsible for that specific rotation) allowed LeBron to find Chris Bosh for a wide open dunk to give the Heat a 98-95 lead with 25 seconds left in the game. The Thunder had a chance to tie—after a Kevin Durant jumper and some Miami foul shots—but both Durant and Westbrook missed 3’s with under 10 seconds left. Westbrook might have been fouled on his attempt—as you can see below, he clearly thought he was—but, well that’s just not a foul you’re going to see called very often in that situation.

LeBron led the Heat with 29 points on 12-20 shooting, nine assists and eight rebounds, or what he calls an average night. The surprise, though, was Mario Chalmers, who finished with 20 points, 12 of which came on four 3-pointers. Miami also continued its strong defensive stretch by holding the Thunder to 42 percent shooting. Kevin Durant led the thunder with 33 points (on 11-21 shooting) and seven rebounds. Russell Westbrook, despite struggling from the field (5-19), managed to get to the foul line 12 times (he was 10-12) and finished with 21 points and 11 rebounds.

And, just like that, the Rockets now find themselves three games above .500 and in sixth place in the Western Conference. What’s most intriguing about Houston is that not only is Jeremy Lin playing really well, but that he and James Harden seem to be figuring out how to play together, something that, just a few weeks ago, many didn’t believe could be done. Lin had 20 points, 11 assists and just two turnovers Tuesday night in Chicago against the Bulls. It was his fourth straight game with over 15 points and the third time in the past four games that he’s shot over 60 percent. (Fun/interesting fact: This streak started last Monday in New York.) James Harden had his typical all around game as he led all scorers with 26 points.

The star for Houston, however, was Omer Asik. The Turkish Hammer finished with 20 points and 18 rebounds and was an incredible +41. 41! Right now the Rockers are playing as well as any team in the League. They’ve won four in a row and seven out of eight. They’ve now scored at least 109 points in four straight games. In their last two games, while facing the two best defensive teams in the League (Memphis and Chicago), Houston has scored 121 points and 120 points, respectively. Clearly, the Rockets are a team that should be competing for a Playoff spot. The question is just how good are they?

Chicago was led by…Nate Robinson? Robinson had 27 points and was the lone bright spot for a Bulls team that continues to show us what we already know: That as hard as they play and as good of a coach as Tom Thibodeau is, the Bulls aren’t going anywhere unless Derrick Rose comes back healthy and ready to go.

Make that 14 in a row for the Clippers, who now have the best record in the NBA. Give the Nuggets credit for hanging around, but the Clippers were just too fast and athletic and deep for Denver, which, when you consider what Denver’s strengths are supposed to be, is pretty remarkable. Chris Paul was his usual brilliant self (14 points, eight assists and just one turnover in 31 minutes) and Blake Griffin finished with 13 points and 842 dunks.

The leaders for the Clippers, though, as has been the case for most of the season, was the bench. Jamal Crawford had a team high 22 points, Matt Barnes added in 20 points, Lamar Odom—yes, Lamar Odom—had six points and 10 rebounds and the bench as a whole scored an incredible 64 points in total. And remember, this is a group that is eventually going to be receiving contributions from both Chauncey Billups and Grant Hill, too. The Lakers, for good reason, get all the attention in Los Angeles.  But this Clippers team has one of the five best players in the League, two of the top-20 players in the League and a great bench. Sounds like a championship recipe to me.