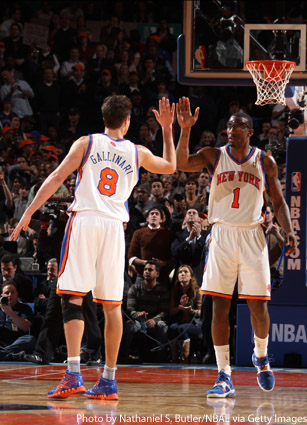 In a nationally televised contest, in the jam-packed, bright-lit Madison Square Garden, and with countless celebrities watching from their courtside seats, the Knicks puffed up their chest and held their own against the big bad Heat, coming away with a victory. Yeah, Chris Bosh was out, but the performance was pretty impressive nonetheless. Miami maintained a slight lead for the majority of the first three quarters, but a huge fourth—led by strong interior play from Amar’e Stoudemire (24 points, 8 rebounds) and a few clutch outside buckets from Danilo Gallinari (20 points) and Landry Fields (19 points)—helped the Knicks grab the lead, which they held onto in the final minute. The Heat, meanwhile, were just off. Dwyane Wade (34 points, 16 boards) got zero help, the ball barely moved on offense, and with the exception of a (very) late scoring run, LeBron (24 points) was relatively quiet.

So maybe Bosh is more important to the team than we all thought? Maybe the Knicks really can beat any team in the NBA on any given night? Maybe they got kinda lucky, benefitting off Bosh’s absence, the Miami’s lack of cohesiveness and some extra crowd-infused motivation? Y’all tell me.

If the Mavs are going to survive (read: win) during these post-Caron Butler times, they’ll need plenty of help from every potential contributor. Well, how’s this: 21 points and 15 boards from Tyson Chandler, and 19 points (8 of 10 shooting) from JJ Barea. That’ll do, no? Dallas held off the Rockets at home last night, picking up their third straight win against some feisty opposition. Luis Scola led Houston with 30, while Kevin Martin picked up 27 in the L.

Can’t hate on the Blazers’ effort, but against the East’s best, and as short-handed as Portland has and continues to be, expecting them to take this one might’ve been asking a little much. Boston grinded out the victory, holding the Blazers to 78 points and only 37.5 percent shooting from the field. Sharpshooter and alley-oop recipient (see below) Ray Allen led the Celts with 18, while Paul Pierce dropped 17 and left a couple minutes early to tend to his nagging thigh injury. Pierce has been a rock for the C’s the past few months, so giving the guy some well-earned rest might not be the worst idea.

Moment of the Night: The two best plays of the night, both courtesy of @Jose3030, who absolutely dominates Twitter on a nightly basis, if you’ve been sleeping.

Then, Rondo hooks up with, um, Ray Allen, for the slick alley-oop: