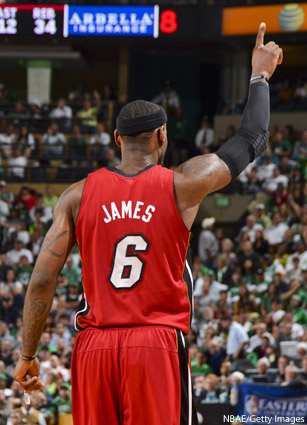 Players with 45 points, 15 rebounds and 5 assists in a playoff game in NBA history: LeBron James, Wilt Chamberlain. That’s it.

How though? Wasn’t it over? Didn’t Paul Pierce’s three-pointer in LeBron’s mug flat-line the Heat? Hadn’t we witnessed the demise of LeBron James and the rest of the Big 3, who just couldn’t live up to the hype and expectations?

Ugh. The exaggerated reports. The ignorant certitude. The so-called pundits (I’m looking at you, you and you) shaking their heads in disgust at Miami, equal parts negligent and oblivious to the fact that Game 6 had to actually be played. Please, just stop it.

This is why I sometimes hate the media, and the legions of fans it permeates and casts its dogma upon. Could you really pre-write Game 6? Have you no respect, no shame? Have you ever actually realized what LeBron James is capable of doing, or do you just focus on his shortcomings last year and the year before that, the way he handled The Decision, and continue to convince yourself that he’s a “failure,” with a penchant for losing and no time to make it right.

I guess you’re right. LeBron James is already 27 years old, and has nothing to show for it. Michael Jordan was sooooooo far ahead of him. He didn’t fail, like, ever. He never got bounced by the Pistons in three consecutive postseasons. I mean, shit, Jordan wasn’t a year older than LeBron is right now when he won his first ring.

LeBron James is not Michael Jordan, I know. But I’m just trying to drive home a point. Please, can we just chill with the labels and conclusions, at least until these playoffs are over?

Last night, LeBron scored 45 only because he decided to stop there. He could’ve gone for 50, 60, or maybe even pulled a David Robinson. I hate you, I hate myself, and I hate everyone else that contributed to us settling into Game 6 without expecting this. Of course, the Celtics deserved all the praise coming their way, and deserved to be the favorites—a cruising veteran bunch, playing a close-out game at home, with proven late-game execution and killer instinct. Boston deserved all of it. But that doesn’t mean the Heat deserved to be counted out with such callous disregard.

Moments after last night’s game ended, Heat coach Erik Spoelstra eloquently addressed the vitriol his team received in the aftermath of Game 5, by saying, “Nobody likes getting dirt thrown on your face before you’re even dead.”

It was as simple as that. Game 6 was LeBron’s. His face, dirt-covered or not, was stoic. Bron effortlessly took over the game, and achieved at least some level of vindication, even if he refuses to acknowledge it publicly.

Midway through the first quarter, James ignited a 10-0 run to put the Heat ahead 22-12. He scored 8 points during that run, showcasing the full package—turn-around jumpshots, driving layups, and-ones, and a three-pointer. LeBron scored 14 points on 6-7 shooting in the opening frame, casting a dizzying and deflating spell on the TD Garden crowd. At the end of the first quarter, Miami had shot 58 percent and commanded a 26-16 advantage.

Boston tried its best to keep the game within reach—losing the second quarter 29-26, heading into halftime down 13 (55-42)—but committed 11 turnovers in the first 15 minutes of the game and seemed out of sync, out of ideas to contain LeBron, and out of fuel. At the end of the first half, Dwyane Wade was only 1-of-6, but it was all good; LeBron James had 30.

The rest, literally and figuratively, was history.

The Heat stayed even with the Celtics in the third, and won the final frame 24-18 to cruise to a 98-79 victory. Wade had a cool 17 points, 8 rebounds and 4 assists, and Chris Bosh finished with 7 points and 6 rebounds in his second game back from a lower abdominal strain. Wade had a strong second half, and Bosh didn’t have to play more than 28 minutes, but all that was just peripheral noise. LeBron stole the show, and possibly the Big 4’s last chance at an NBA title. He was a villain, a monster, an assassin in his own world.

On the road, in Boston, facing elimination, LeBron played 44 consecutive minutes to start the game, making shot after shot after shot. Three-point heaves, layups, floaters, put-back dunks, jumpers over the smaller Rondo, over the taller KG. 19-for-26, 45 points, 15 rebounds and 5 assists. An emotionless face throughout, like he expected nothing less. LBJ unraveled his whole being, went all-in, and vomited everywhere. This one ranks right up there with the 48 he hung on Detroit in Game 5 of the ’07 Eastern Conference Finals, when he scored 29 of Cleveland’s final 30 points to prevail in double-overtime. This one is going on the Wikipedia page.

Paul Pierce, the assumed counterpart to LeBron, struggled mightily. Pierce shot just 4-18, finishing with 9 points and 5 rebounds in 31 minutes of play. His jumper didn’t fall all night, going 2-12 from beyond 10 feet. Not a good look, especially when his enemy was pissing on his floor, making history in his house. Rajon Rondo contributed 21 points and 10 assists, but committed 7 turnovers, and Kevin Garnett had a meaningless 12 points. The Celtics missed 13 of 14 three-point attempts and will now have to win a second straight game in Miami if they want to advance to the NBA Finals.

This could have been the last home game for the Big 4. Tomorrow night, they’ll try to buck their recent trend of losing close-out Game 6s and then falling in Game 7. It happened against Orlando in the 2009 East Finals, and against the Lakers in the 2010 NBA Finals.

LeBron’s 11th 40-point playoff game, second among active players to Kobe Bryant’s 13, was enough to quiet his skeptics and silence his critics for the time being. After the game, LBJ said all the right things, deflecting attention off himself by putting the game in its proper perspective—merely a must-win in a best-of-seven series—while also giving us a glimpse of what’s to come.

“I won’t regret Game 7. Win, lose or draw, I’m going to go in with the mindset like I’ve had this whole season. And we’ll see what happens.”

That mindset was on display last night, and we saw what happened.