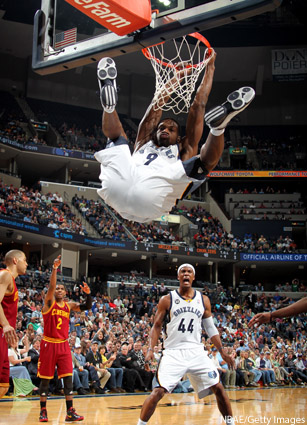 Welp, there goes Charlotte’s best shot at avoiding the tag of “worst team ever.” The Wizards laid the smackdown on the Bobcats, winning their 4th straight game—don’t look now, but the Wizards are the hottest team in the East. I kid you not, Washington’s 4-game streak is the longest in the conference, and also the first of its kind for DC since 2007. Small victories, y’all. John Wall looked like he was enjoying himself last night, and his stats showed, as he racked up 16 points and 14 assists, many to Nene, who had 18 points. The Wiz shot 55 percent, to just 34 for the ‘Cats as they completed the season sweep. Your nightly example of Charlotte’s futility? Jan Vesely was a perfect 8-8 from the floor with 16 points.

Roy Hibbert, Danny Granger and George Hill all had the night off for Indiana, leaving Paul George to do the heavy lifting for the Pacers. He obliged, with 12 of his 27 points in the fourth quarter, plus 10 rebounds, 4 dimes and 3 steals. George hit four free throws to seal the deal, while my man-crush Greg Monroe had another nice game (18 points, 12 rebounds) but missed 3 of his 4 foul shots in the clutch. unlikely hero Tyler Hansbrough provided the game’s biggest bucket, though, hauling in an offensive rebound for a putback plus the harm—a 3-point play to break a tie with 26 seconds left. Indy shot just 38 percent, but outrebounded Detroit 56-42 and forced 18 turnovers.

The final farewell to New Jersey ended with the road team clinching a Playoff spot. Philadelphia powered past the Nets behind 56 bench points and 54 percent shooting. A parade of ex-New Jersey players made this night an emotional one at the Prudential Center—and just the 7th sell-out this year in Newark, to boot. It was the Sixers, though, with something to play for. The win locked down the last post-season bid in the Eastern Conference for Philly, led by a typical Andre Iguodala outing: 14 points, 9 assists, 7 rebounds. Technically, the Sixers are now in a tie with New York for the No. 7 seed, though it sounds like Doug Collins is prepared to “rest” his starters for the final two games of the year, which will likely set them up for a first-round showdown with Chicago. And finally, below lies the answer to the inevitable future trivia question of “Who scored the final Nets bucket in New Jersey?”

Milwaukee finally got around to picking up a key victory. Unfortunately it was too late, since before its win over Toronto, the Sixers eliminated the Bucks from contention earlier in the night. The Raptors led for much of the game before Milwaukee mounted a comeback, erasing a 14-point deficit with a 30-19 fourth quarter during which Ersan Ilyasova scored 13 of his 19 points (plus 15 rebounds). Brandon Jennings scored a game-high 25 points for the Bucks, who didn’t have to deal with DeMar Derozan (whose been balling lately) after he was ejected for a second-quarter outburst following a traveling call. Jennings’ 3-point play and a pair of Monta Ellis (17 points, 6 rebounds, 5 assists, 4 steals) free throws gave Milwaukee the lead for good with just over 3 minutes remaining.

Kyrie Irving scored a game-high 25 points on 10-16 shooting to keep the Cavs competitive, but in the end, Memphis just had too much beef up front. Marreese Speights had 17 and 10, Marc Gasol had 17 and 3 blocks and the Grizzlies out-muscled Cleveland to pull to within a half-game of the Clippers for the No. 4 spot in the West. Memphis has now won 5 straight and 10 straight at home, this time with 6 players in double figures, including 13 for Tony Allen, who tied a franchise record with 8 steals. The Grizzlies ended the game on an 11-2 run while the Cavaliers sputtered from the free throw line, coming short in an attempt to play spoiler.

San Antonio clinched the No. 1 seed in the West in blowout fashion, tying its biggest winning margin of the season. Tony Parker scored 18 points, as did Danny Green—who shot a perfect 6-6 from the field (and 4-4 from three-point range), and the Spurs have now won 8 straight. San Antonio shot 59 percent, the Blazers just 39. Tim Duncan, who turns 36 tomorrow, scored 18 points and had 8 rebounds, but sat out the fourth quarter with his fellow members of the Texas Big Three. How much you wanna bet Coach Pop sits the trio for the last 2 (and now meaningless) games of the year, too? Meanwhile for Portland, Wesley Matthews scored a game-high 24 points as the Blazers lost their sixth straight.

Moment of the Night: Is there a cooler cat in the NBA than Tony Allen? Check this hilarious fake pass.

Tonight: 5 games on deck with plenty of Playoff implications, including a TNT doubleheader of Heat-Celtics and Suns-Jazz. Down to the wire, people.