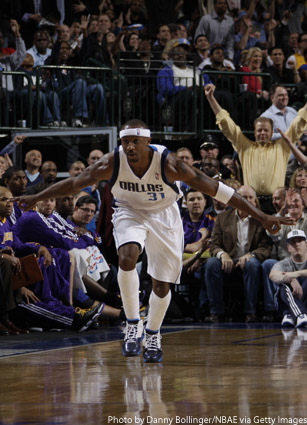 No more Melo; no more losing? Ha, right. Either way, putting the drama on hold allowed the Nets to focus up for at least one game, as they defeated the Jazz at home with relative ease. Brook Lopez led them with 20, but seven (!) New Jersey players scored in double figures, and they out-rebounded the Jazz by 13 in the win. “I’m relieved it’s over,” coach Avery Johnson told the media after the contest, and, well, clearly his guys are too.

The no-longer-surging Magic took on the Sixers at home, and continued their struggling ways early before pulling back into the game late. Lou Williams’ buzzer-beating attempt rattled around the rim and fell out as regulation ended, which led to an overtime session during which Orlando had their way. Ryan Anderson led the Magic with 20 points, and more impressively, I just said typed that with a completely straight face. (And you guys think anyone can write about basketball? Pshh.) Before heading home, the 76ers stop in Charlotte for a battle with the Bobcats tonight.

Grant Hill, still chuggin’ along. The 38-year-old dropped 27 points last night, leading the Suns to an easy victory in Cleveland over the Cavs. Steve Nash contributed 15 points and 15 assists, and newcomer Marcin Gortat went for 16 points and 12 rebounds in the W. As if they needed any more problems, the Cavaliers’ injury report has stretched from a couple names to a legitimate list. Meanwhile, don’t look now, but the Suns have won four straight. Their road trip continues in Washington tomorrow.

Speaking of thriving veterans, Shaq provided a double-double (12 points, 12 boards) for the Celtics, who squeaked this one out against a scrappy Pistons squad. A late Ray Allen J gave Boston their first lead of the second half, and they held on from there, barely nabbing the team’s fourth straight victory. Paul Pierce dropped 22, while Rodney Stuckey led the Pistons with 15.

All types of drama in this one, as the Hornets came back in the third quarter and went back-and-forth with the Grizz in the fourth, forcing OT after some Chris Paul (20 points, 12 dimes) heroics. In extra time, Marcus Thornton (17 points) put in a reverse lay-up with 6 seconds remaining, and a Rudy Gay (22 points, 8 boards) buzzer-beater rimmed out as the Bees held on. New Orleans is picking up steam, with this being their sixth straight win in as many games after a slew of so-so play earlier in the year.

You know those kids that can’t sleep away from their homes until their like, I don’t know, 17? The Wizards are their basketball equivalent, as last night’s loss pushed their road record to a dreadful 0-20. Damn. Keyon Dooling, Corey Maggette and Earl Boykins combined for 63 points (not the best sign, if you’re an opponent), as the Bucks cruised en route to the victory. Andray Blatche did go for 23 points, 7 boards and 4 steals, while John Wall scored 10 and dished 13. The Wizards have two more home games (whew!), before they hit the road again to play in New York next week.

The Raptors took a surprising 11-point lead into halftime, and then the Spurs, unsurprisingly, came back in the second half and earned the W. A 33-point Spurs third quarter made all the difference, as San Antonio—led by Manu Ginobili and DeJuan Blair’s combined 45 points—won their seventh straight. DeMar DeRozan, who will be replacing Brandon Jennings in the dunk contest, led the Raps with 28.

The Rockets did a great job of holding down the Knicks last night, as a combination of good Houston D and poor New York shooting held the Bockers to 89 points. Kevin Martin led the Rocks with 21, while Chuck Hayes (8 points, 12 boards) played some strong interior defense and had a huge impact on the outcome. The Knicks have hit a mini-slump, losing four straight, and they obviously will might use this as a decent opportunity to call up the Nuggets and see what it’d take to hook New York up with another superstar.

When one squad that’s cruising along faces a squad in desperate need of a single win, things like this happen. The Mavs got a huge night from their bench, with Jason Terry and Shawn Marion each dropping 22. Both teams shot above 54 percent, but Dallas put in 12 threes (as opposed to the Lakers’ six), five of which came from Jason Kidd. Well, I guess this answers that.

Looks like the Nets’ removal of themselves from any and all trade talks (for the time being) also allowed a few Nuggets to realize that, without a super imminent trade awaiting, they can relax and actually play some ball. And ball they did, dropping 112 points (including 35 from Carmelo) in a win over the Thunder. Russell Westbrook and Kevin Durant combined for an even 50 in the loss, as OKC dropped to 27-15, tied with the Jazz atop the Northwest.

Fresh off some terrible news, the Trail Blazers went into Sacramento and played a close one, pulling ahead in OT behind a strong finish from LaMarcus Aldridge (23 points, but only 8 in the first three quarters). Nicolas Batum added 24, and the Blazers got a clutch jumper from Andre Miller in OT before going on to win their third straight. Beno Udrih, who’s been quietly putting up some nice numbers this year, led the Kings with a 20 spot.

As two over-performing young forwards on two under-performing teams, the Blake Griffin v. Kevin Love storyline seemed to dominate this matchup. Love got the double-double (26 points, 11 boards), but Blake (29, points, 8 boards) got the win, as the lukewarm Clippers took down the ice cold TWolves without too much trouble. Eric Gordon added 23, and DeAndre Jordan put in 12 points and scooped up 11 boards for the Clips. The W was LAC’s third straight, and six in seven games; they’ll be Portland tonight going for a fourth.

Monta Ellis continued his stellar ’10-11 campaign last night, dropping 36 points and draining a jumper with 0.6 seconds left on the clock that put the Warriors on top. The shot came after an intense fourth quarter, as the Dubs barely took down the Pacers at home. Danny Granger filled up the stat sheet (32-13-6-3), but he didn’t get much help, as Indiana 16-23, just a game ahead of Milwaukee in the East. The West is hella crowded with stars, but Monta is making a pretty damn good case that he deserves to suit up in next month’s big game.

Moment of the Night: Not exactly a buzzer-beater, but it doesn’t get much closer than this. Monta, for the win:

And while the TV cameras did a fine job of capturing that, there’s something a little cooler about the from-the-stands, fan’s-point-of-view angle of this one: