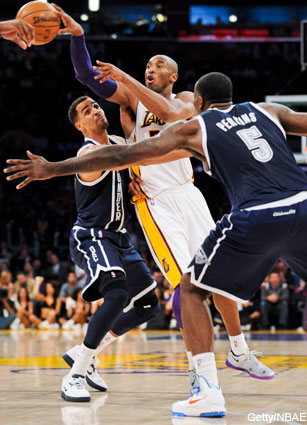 Sunday was one of the best game days in a while. Three epic showdowns and plenty more to talk about. It’s time to post up!

The Mamba says he’s evolving. “I’m trying to evolve and find out what we need as a ballclub,” Kobe said after helping his team to its first win over a top-four West foe.

The Lakers have won two solid games at home since a clear-the-air team meeting in Memphis last week.

Kevin Durant was more aggressive than usual, taking 12 shots in the paint. He didn’t have a field goal in the final 6:39, scoring just seven points in the fourth quarter. Russell Westbrook missed his first eight shots and 12 of his first 13 before finding a rhythm. He finished with 17 points 9 boards and 13 assists—his second game in a row with 13 or more dimes.

Oh, and how about Pau Gasol? Dude is finally finding his groove. Gasol played 36 minutes off the bench, looking confident as ever, recording 16, 4 and 4.

L.A. had lost nine of their last 11 against the defending Western Conference champs, including four of five during the Lakers’ second-round Playoff series and a blowout loss at Staples Center 16 days ago.

It was a must-win for the Lakers, and against all odds, Kobe & Co. pulled off the upset in Staples. Will this be a turning point for the Lakers?

It was Miami’s first game in Boston since it won Game 6 of the Eastern Conference finals, and Ray Allen’s first since he left the Celtics after five seasons and signed as a free agent with the Heat.

Allen played well in his return, dropping 21 off the bench, but he missed a crucial free throw with 2:18 to play in the fourth quarter and the score tied at 81-81.

LeBron James sent the game into the first OT with a three-pointer with seven seconds remaining in regulation.

Kevin Garnett had 24 points and 11 board, including all six of the Celtics’ points in the first overtime period.

Pierce hit a 22-foot jumper that proved to be the game-winning field goal with 31 seconds to play to gave them a 99-98 lead. He finished the game with his seventh triple-double of his career (17 points, 13 rebounds and 10 assists).

Jeff Green played good defense on LeBron down the stretch and was a big part of the win. He entered the game at the 3:05 mark in the first quarter, and sat out for just seven minutes of the game after that.

It was the Celtics second consecutive double-overtime game, and a huge win against the class of the Eastern Conference. But of course the story was Rajon Rondo, whose torn ACL will sideline him for the remainder of the season.

Rondo suffered the injury late in the fourth quarter of Friday’s loss to Atlanta, but played through two overtimes (and even recorded a triple-double). He thought he had a bum hamstring.

By the early moments of the third quarter, various media outlets were reporting that Rondo would be out for the season, and the news quickly spread to the players and fans, leaving a very dark cloud over the hard-fought victory.

The crowd gave Allen a standing ovation when highlights of his career with the Celtics were shown on the video board above center court during a timeout with 5:33 left in the first quarter.

Definitely a bittersweet meeting between these two rivals.

Carmelo Anthony tied a franchise record with 9 three-pointers, then converted a go-ahead, three-point play with 12.5 seconds left to cap a 42-point night—his forth 40-point game on the season.

Melo had all nine of his triples by the end of the third quarter.

Amar’e Stoudemire came off the bench had 18 points and 8 boards in 29 minutes. JR Smith, after failing to score on Saturday, bounced back with 18 points of his own.

ATL shot 60 percent, and could have easily won the game if they hadn’t turned the ball over 19 times. Jeff Teague scored 27 points for the Hawks. Josh Smith added 20 and Al Horford had 16.

Oddly, Jason Kidd didn’t even come to the bench in the second half. The Knicks said he’s just resting, and James White started the second half in his place.

Despite the 106-104 victory, it was clear the Knicks need to go back to some November #knickstapes, where the team was atop in the L in defense and playing with poise.

With Chris Paul sitting out for the forth consecutive game, it was Blake Griffin’s night.

Griffin had 23 points and 9 assists, helping the Clippers beat the Portland 96-83, avenging a one-point loss to the Blazers a day earlier. BG has 19 assists (!!) in his last two games and is suddenly hitting free throws.

Despite many things not working in their favor—a phantom offensive foul called on a Caron Butler three-point attempt in the second quarter, injuries to Chris Paul and Chauncey Billups—the Clippers thoroughly outplayed the Blazers and ended their four-game slide.

Lamar Odom had one of his best games of the season, finishing with 8 points, 13 rebounds and 6 assists in 29 minutes. Los Angeles outscored Portland 56-24 in the paint.

LaMarcus Aldridge led the Blazers with 21 and 11. Dame Lillard was swiped in the face by Griffin early on the game, but he stayed in the game and posted a solid 16 and 5.

As usual, the Blazer bench provided no relief. Portland’s reserves are averaging just 16.5 ppg on the season—that’s the worst bench production in the past 23 years. Yes, you read that correctly. Not one bench player on Portland averages 5 points.

You have to feel bad for the Blazers, who have as good of a starting lineup as anyone, but just can’t get any help off the bench. It was Portland’s seventh loss in nine games.

The Grizzlies went most of the game without Mike Conley, who left after four minutes due to a sprained left ankle.

Zach Randolph led Memphis with 20 points and 13 rebounds for his League-leading 28th double-double, but it wouldn’t be enough.

Using a tough defensive approach, New Orleans put the game away by outscoring Memphis 27-15 in the fourth quarter. Ryan Anderson was the real difference maker, as he came off the bench to connect on 7 treys, for 22 points in the Hornets’ 91-83 win.

Rudy Gay had one of his worst games on the year, as he settled for too many low-percentage shots. Gay went 3-17 from the field, including a 1-7 performance from long range.

Conley was in a walking boot after the game.

Another heartbreaker in Orlando.

With the Magic down by four points, Jameer Nelson was fouled on a three-point shot with seven seconds remaining.

Nelson hit the first two and missed the third.

Big Baby Davis got the board and was blocked. Nikola Vucevic got the second shot and cleanly missed. Detroit won the ballgame by two, 104-102.

Brandon Knight tied a career-high 31 points, including five three-pointers, but failed to hand out a single assist.

The Magic played well. Glen Davis dropped 17, 12—his first double-double since December 7. Nikola Vucevic also double-doubled with 12 and 15. And JJ Redick hit a career-high eight three-pointers on his way to a career-high 31 points, but they couldn’t close it out. Orlando is now 3-14 in games decided by six points or less.

It doesn’t get any easier for the Magic, as today begins a six-games-in-nine-nights road trip. They’ll be in Brooklyn tonight.

Dirk Nowitzki had 18 and passed Allen Iverson on the career scoring list and the Mavs beat the Suns, 110-95. Dirk moves into the 18th spot among the greatest scorers of all time.

It was a lackadaisical game that, by the forth quarter, wasn’t even a game. Phoenix didn’t have any offensive flow (or weapons, for that matter). Goran Dragic led all Suns with 18 points, but his teammates aren’t moving.

Vince Carter (15 off the bench) and Shawn Marion played well for the Mavs (18, 9 and 5). Roddy Beaubois suddenly saw solid minutes and had 8 points and 3 assists in 24 minutes.