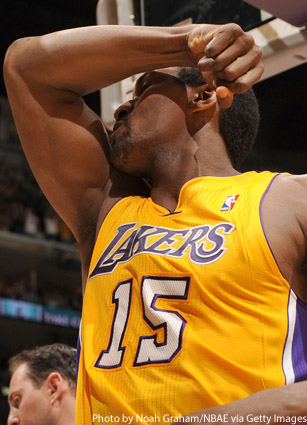 I wrote the other day how both of these teams were at a bit of a freefall from their respective positions, but that the Spurs’ drop-off seemed definitively worse than the Celts’. And now, I’ve got proof! With both teams fully stocked with their best guys (though arguably not the full health of said guys), the C’s jumped ahead in the third and maintained that lead from there, defeating San Antonio on the road and showing what they’re still capable of, even with all the losing and injuries. Rajon Rondo was his usual masterful self, scoring 22 points (11-20 from field) and dishing 14 dimes, while Tony Parker put in the game-high of 23. Most notable was the fact that Boston shot 54.8 percent from the floor, 10.5 percent more than the Spurs, a figure that likely represents the difference in both efficiency and final score. Coach Pop’s crew will look to end this now-five-game losing streak in Houston tonight; the Celtics are off to Atlanta.

The Mavs had a chance to make a statement with a big win over the Lakers last night, a chance to legitimize their five-game winning streak, incredible road record and plans to contend during the upcoming postseason. They might’ve made a statement, but it was nothing positive, providing evidence that none of the previous three things may be true. The Lakers simply had their way with them last night, shutting down Dallas offensively (the Mavs shot 36.1 from the field), and limiting their attack from all angles. They also got in the Mavs’ heads, as a too-hard Jason Terry foul on Steve Blake led to a scuffle, the result being the ejections of Blake and Matt Barnes for L.A., and Terry and Brendan Haywood for Dallas. As far as the team leaders go, Kobe (28 points) is still rolling, while Dirk scored a nice 27 but received little help. If the current standings maintain—which, given the Spurs’ continued downfall and the Lakers’ insistence on not losing, might not be the case—the Mavs and Lake Show will face each other in the second round. It’s obvious who’ll have the upper hand in that one, but at least that matchup will be heated as hell. Who knew Steve Blake could be at the center of any kind of drama, with the possible exception of a guest spot in a serious episode of a usually-lighthearted TV sitcom? (That I could see.) Anyway, the Mavs will look to get back on track in Golden State tomorrow night; the Lakers are in Utah tonight.