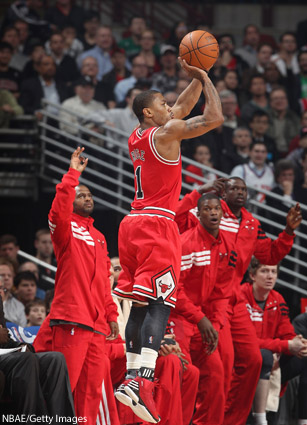 For the first few quarters, it looked like Kris Humphries might will the Nets to a win without Deron Williams in uniform. But even Hump’s career-high 31 points, plus 18 boards, weren’t enough for New Jersey to hold off the Bucks, who all of a sudden are tied with New York for the 8-seed in the Eastern Conference. Four different Milwaukee players had at least 6 assists, including Brandon Jennings, who went off for 34 points, 7 dimes and 7 rebounds to counter Humphries’ big night. Milwaukee erased a double-digit deficit, tying the game at the third-quarter buzzer on a Beno Udrih 3-pointer before Jennings hit two to open the fourth, putting the Bucks out in front. Last time these two teams met it was Ersan Ilyasova who did the heavy lifting with a 20-20 night, but last night he scored just 4 points and had 3 boards. Drew Gooden added 23 points, 8 rebounds and 7 assists for the 18-24 Bucks.

If a 6-win team and a 10-win team barely scored 70 points each in a half-empty arena, did the game actually happen? According to reports, it did. Charlotte notched just its third road win of the year in New Orleans, riding a 22-5 run in the second half and holding the Hornets to 38.5 percent field goal shooting. New Orleans had a chance to tie the game—with possession in hand and 5 seconds to play—but Bismack Biyombo blocked the living snot out of a Trevor Ariza dunk attempt that would have sent the game to overtime (the world thanks you, Bismack). It was one of the big rookie’s 4 blocked shots on the night, plus he had 7 rebounds and a career-high 12 points. The leading scorer for each team finished with just 15 points (Gerald Henderson and Jarrett Jack).

Watching Derrick Rose play basketball is just damn fun. The MVP racked up 32 points, 7 assists and 6 rebounds as the Bulls dominated the boards to beat the Knicks, who have now lost 6 in a row and are 2-8 since Carmelo Anthony’s return to the lineup. Chicago outrebounded New York 56 to 38 and grabbed a ridiculous 22 offensive rebounds, cementing their place at No. 1 in the Eastern Conference. The Bulls are 9-1 when DRose scores at least 30 points, and have won 10 of their last 11 games. Even Jimmy Butler gave the Bulls some great minutes down the stretch (8 points). The Knicks, meanwhile, are a mess. Anthony led NYK with 21 points (8-21 shooting) and 8 rebounds, but was obviously frustrated at his lack of fourth-quarter touches, and while all five New York starters scored in double figures, the bench provided little spark, or production. At 18-24, the Knicks are now in danger of falling out of the Playoffs, as they sit tied with Milwaukee for the No. 8 spot in the East.

Ugh. At least it was over quickly—the Spurs shot better than 60 percent from the field in the first half, and Richard Jefferson’s corner three at the halftime buzzer put San Antonio ahead 63-59. On the same day his backup (TJ Ford) retired from basketball, Tony Parker poured in 31 points on 13-18 shooting and dished out 7 assists after sitting out the previous game to nurse a strained quad. Even after Manu Ginobili (8 points, 7 dimes) had to leave after his 20 minutes of action due to some tightness, the Spurs were just too much for my Wizards, outscoring Washington 64-30 in the paint. Tim Duncan passed Clyde Drexler for No. 25 on the all-time scoring list with 14 points, while Javale McGee led the Wiz with 21 points and 15 rebounds.

Has Al Jefferson finally figured it out? The Big Fella poured in 33 points and grabbed 12 rebounds to lead the Jazz back to 20-21 on the year. Paul Millsap had 12 points, 10 rebounds, and season-highs in assists (5) and steals (5), Devin Harris had 19 points and Utah shot 54 percent from the field as a team. Rodney Stuckey (team-high 29 points, 7 assists) tied the game at 85 on a driving layup with 6 minutes left in the fourth quarter, but the Jazz finished the game on a 20-5 run, capped off by Jefferson’s first career 3-pointer, which came with 4 seconds left in the game. Oh yeah, and Jefferson did all that just about 24 hours after learning that the grandmother who raised him had passed away. Be well, Big Al.

When these two teams hook up, defense is optional. It was the highest-scoring game of the NBA season thus far, as Minnesota shot 56 percent, Phoenix shot 52 percent and 13 players in all scored double-digit points. Kevin Love was the high-point man with 30, Luke Ridnour hit a driving go-ahead layup with just under 2 minutes remaining, and the Wolves’ bench outscored that of the Suns 52-35 to improve to 22-21 on the season. Minnesota snapped a 9-game losing streak versus the Suns, who were led by 28 points and 9 rebounds from Jared Dudley and a 25-point, 10-assist night from the ageless Steve Nash. The Wolves hit 14 3-pointers, got 24 points from Nikola Pekovic and had 30 assists as a team despite the absence of Ricky Rubio.

The Celtics blew a 10-point fourth-quarter lead before gearing up again and staving off the charging Clippers, who join the Knicks in borderline panic mode, having lost 5 of their last 7. Los Angeles shot 37 percent from the field, and yet were in this one until late, when a 9-0 Boston run ending with a Paul Pierce 3-pointer gave the Cs an 83-79 lead, enough to take home a 22-19 record. Pierce scored 10 of his 25 points in the fourth quarter, Kevin Garnett had 21 points and Rajon Rondo dished out 10 dimes to go with 12 points and 3 steals. For Lob City, Blake Griffin had 24 and 9 while Chris Paul and his mask had 14 points, 5 assists and 4 rebounds—but the home team shot just 37 percent from the field and made only 5 of 23 three-ball attempts, dropping to 23-17 on the year.

Lines of the Night: Big Al Jefferson drops 33 points and 12 boards in Utah’s win, Derrick Rose goes for 32-6-7 to beat the Knicks, Brandon Jennings gives the Bucks 34-7-7 and Kris Humphries goes off for a career-high 31 points, plus 18 rebounds.

Moment of the Night: “You. Shall. Not. Passsss.” —Bismack Biyombo

Dunks of the Night: DRose takes flight and your nightly Blake Griffin highlight.

Tonight: 8 games on deck, highlighted by Heat-Magic on NBATV at 7, with a smattering of other intriguing games including Rockets-Thunder, Lakers-Grizzlies and of course, Wizards-Mavericks.