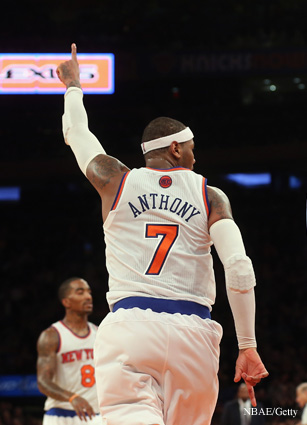 The Clippers looked like they were going through the motions after the first three quarters and understandably so. A matinee game against a 4-16 Raptors team in early December probably wasn’t circled on the calendar. In the fourth, though, Jamal Crawford got hot, scoring 16 in the quarter to lead LA to their sixth straight win. The Clippers bench dominated the Raptors reserves, outscoring them 47-24. Behind Eric Bledsoe’s 14 and Crawford’s big quarter, the Clippers took their first double-digit lead in the fourth quarter and outscored Toronto 25-10 to cruise to the finish.

— Crawford missed two free throws in the first quarter to put an end to his consecutive made free throws streak at 58.

The backcourt duo of Brandon Jennings (26 points) and Monta Ellis (24) combined for 50 points as the Bucks served the skidding Nets another loss. Milwaukee led by as many as 29 but Brooklyn crawled back into the game and cut the deficit to six with seven minutes left in the third quarter. The two teams played to a sandstill over the next quarter and a half until Ellis’ layup put the Bucks up 87-79 with two and a half minutes to go in the game. On the next play, Gerald Wallace committed a costly turnover that allowed Larry Sanders to hit a reverse layup on the other end and put the Bucks up by 10–a lead that proved to be insurmountable.

— Brook Lopez missed his fifth straight with a foot injury. The Nets are 1-4 with him on the bench.

— Jennings also had 7 assists and 5 steals.

In a game that pitted one of the League’s best offenses against one of the League’s best defenses, the best offense prevailed as the Thunder scored 100+ for the 12th straight game. The Thunder led by ten after three quarters but the Pacers fought their way back into the game. After a Paul George three with five and a half minutes left cut the deficit to three, we had ourselves a ball game. The Thunder remained composed despite the comeback and reeled off eight straight points thanks to clutch plays from Serge Ibaka and Russ Westbrook. After Ibaka blocked a Roy Hibbert shot, Westbrook nailed a jumper. Russ followed that up with a steal and another bucket to push the Thunder lead to 11 with three minutes left. The Pacers, who got off to a hot shooting start, didn’t have enough left in the tank and went cold from the field to lose by double-digits.

— Keven Durant scored 27 and grabbed 8 boards. Westbrook scored 21, grabbed 7 boards and dished out 6 assists while only turning the ball over twice.

— All five Pacers starters scored in double-figures. David West led the way with 21 and 9 boards.

— Oklahoma City outrebounded Indy 40-34. The Pacers were the top rebounding team coming in.

After an ugly loss to the Bulls on Saturday night, turns out all the Knicks needed was a little home cookin’ to get back on track…Well, that and the return of Carmelo Anthony to the starting lineup. Melo came up big for the Knicks, leading all scorers with 34 points, including 11 in the second quarter alone. Jason Kidd, who I’m convinced has some sort of weird voodoo hold over his team, played his best game of the season. Kidd finished with 17 points and 7 assists and was constantly in the right place at the right time, setting his teammates up for easy buckets and forcing turnovers with his crafty defense. The game itself was close throughout and the Nuggets led 88-80 early in the fourth. The Knicks reeled off a 17-2 run with Novak hitting back-to-back three’s to start the run and Melo capping it off with a three of his own to put the Knicks up 97-90. The Nuggets couldn’t recover, giving the Knicks their 15th win of the season.

— Tyson Chandler continues to be a presence in the post. Last night he grabbed 12 boards to go along with 15 points.

— Mike Woodson has to be in the early running for Coach of the Year. 15-5 while missing two starters is nothing to sneeze at.

The Suns are just not a good ball team right now and last night they dropped their seventh straight after losing at home to the Magic. The Suns held a 67-61 lead with four minutes left in the third quarter but completely fell apart. The Magic ripped off a 21-10 lead that stretched into the fourth and gave Orlando an 82-77 lead. After falling behind by 11 in the final quarter, the Suns went on a 6-0 spurt to cut the lead to five with three and change left. But the Magic scored four quick points to go back up by nine and put the Suns away for good.

— The Suns were missing Goran Dragic who was sick.

The Jazz frontcourt made lightwork of Dwight Howard as Al Jefferson (14 and 11), Paul Millsap (24 and 9) and Enes Canter (14 and 6) dominated inside to lead Utah to a solid road victory. Howard played 41 minutes and finished with 11 points and 16 boards. The Lakers never led in the second half and fell behind by as many as 15 in the fourth quarter after Utah went on a 20-8 run. The Lakers countered with a 17-7 run of their own and cut it to five with a minute and change left. Kobe, who finished with 34 on 24 shots, did everything in his power to push his team over the hump but missed two three-pointers in the final 30 seconds and LA dropped their second straight game.

— Mike D’Antoni does not care about defense. The Jazz shot 54 percent from the field and outscored the Lakers 19-4 on the break.

— Jordan Hill finished with 17 off the bench while Jodie Meeks chipped in with 16.

— The Lakers play their next four away from the Staples Center. They can make a statement by beating the Knicks at the Garden on Thursday.