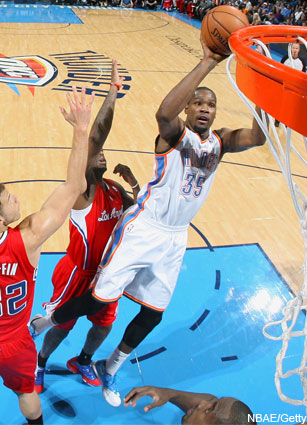 A night after gutting out a hard-fought win, the Clippers didn’t have enough to hang with the Thunder. Oklahoma City locked down one of the best offensive teams in the league, holding Los Angeles to just 41 percent shooting in an end-to-end W. Kevin Durant was the top scorer for OKC with an efficient 28 points (10-19 shooting) as well as 8 assists. Blake Griffin was a beast in the loss, going for 27 points and 10 boards.

OKC got off to a quick start and pushed the pace, led by none other than KD, who went 5-7 for 12 points in the first quarter. When the bench units came into the game in the second quarter, the Thunder pushed their lead, with Steven Adams (7 rebounds, 3 blocks) and Reggie Jackson (9 points) helping pave the way. The Thunder bench was crucial all night, with Adams, Jackson and Derek Fisher all finishing with plus-minus ratings of +10 or better, with Jeremy Lamb (11 points) right behind at +9. Even though Jackson didn’t crack double-digits in points, he’s shown flashes where he very much looks like the scorer the Thunder need off the bench.

By the time Russell Westbrook (12 points, 6 rebounds, 5 assists) and KD re-entered the game, the lead was up to 12 for OKC. The chippiness that led to Serge Ibaka (17 points, 3 blocks) and Matt Barnes (out for a few weeks with an eye injury) getting tossed in the last meeting continued here. Thabo Sefolosha took a flagrant foul from Chris Paul, who threw a flying hip-check on Sefolosha’s layup attempt. CP3 (17 points, 12 dimes) got hot offensively after that, scoring 7 points in the final 3:30 of the quarter. OKC withstood that run thanks to threes by Sefolosha and Durant.

Going into half, the Thunder were up 51-43. OKC shot 47 percent in the first half, compared to just 38 percent for LA. Durant went into half with 16 points on 6-9 shooting, while Paul was about the only thing the Clippers had going for them; his 11 points and 4 assists accounted for 20 of the Clips points in the first half.

Blake got rolling in the third quarter, getting a monster dunk rolling down the lane and knocking down three jumpers in the first six minutes of the quarter, including a beautiful turnaround over Ibaka. He kept hitting throughout the third, going for 15 points on 7-10 shooting in the quarter to keep the Clippers in it. They needed every bit of Griffin’s effort, as OKC maintained a double-digit lead for much of the quarter. Ibaka, who has been fantastic in the game and a half he’s played against the Clips this season, responded with a few jump shots of his own. Things didn’t get any closer in the fourth, as OKC’s fresher legs helped them hold the Clippers down.

No surprise, but defense remained an issue for the Clippers. Despite the Thunder shooting just 4-19 from three-point land, they still gunned and slashed their way to 51.9 percent shooting overall and a 107.8 offensive rating. You know it’s getting bad for a team when Derek freaking Fisher, approximate age 56, can drive down the middle of the lane unimpeded. Where ya going, DeAndre?

Denver pulled away from the Bulls late, using a 13-0 run to start the fourth quarter to put the game out of reach. Chicago missed 7-8 shots to start the period, while former Bull Nate Robinson, who scored 10 of his 11 points in the fourth, and fellow reserve Jordan Hamilton (team-high 17 points) hit four triples between them to key the run. Derrick Rose cooled off significantly after blitzing Denver in the first half, finishing with 19 points for the Bulls.

Everyone was in on the action early, with no less than 11 different players getting into the scoring column in the first quarter alone. The Nuggets got balanced scoring throughout the first half, with four players scoring between 8-10 points. Kenneth Faried (12 points, 11 rebounds, 2 blocks) paced them with the 10, including a half-court alley oop from Ty Lawson.

Carlos Boozer (15 points, 10 rebounds) continued his hot offensive start for the Bulls, hitting four shots early. Rose looked like very much like himself, getting to the basket for a couple layups before Denver’s lackluster rim protectors knew what hit them. Rose kept pouring it on in the second quarter, scoring the Bulls’ first 9 points, scoring 15 points in the first half. He finished in a crowd like it was 2011, a good sign for the Bulls. (Of note: his season high coming into the night was 20.)

Rose’s electricity on offense wasn’t enough to deter the Nuggets in the first half, as Denver tore Tom Thibodeau’s vaunted defense to shreds. The Nugs shot 52 percent in the first two quarters, getting tons of looks in the lane. Meanwhile, the Bulls bench, usually one of their strong suits, got outscored 23-3 in the first half and 49-21 for the game.

This affair ground to a halt in the third quarter, especially for Luol Deng (6 points, 3-18 from the field, 11 rebounds) and the Bulls. Chicago mustered just 14 points in the quarter, while Deng, their leading scorer, went through a waking nightmare: 1-5 shooting, 3 turnovers and 3 fouls.

Denver ended up having six players score in double digits and also blocked 10 of Chicago’s shots. While the Nugs aren’t going to match their franchise-record win total from a year ago, it’s a positive that their home court still carries some advantage.