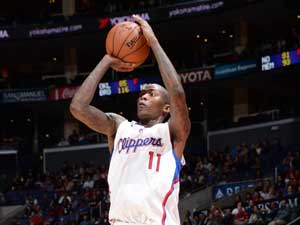 Houston and Philly’s records remain each other’s opposites after last night’s game in the Wells Fargo Center. James Harden’s potent performance (35 points and 9 rebounds) paired with both Dwight Howard (11 points and 14 rebounds) and Trevor Ariza’s (24 points and 7 assists) solid numbers gave the visiting Rockets an edge over the hometown Sixers. Although Philadelphia remains winless in the season so far, last night’s match-up did result in some highlight-worthy plays—including this powerful block against Harden to end the third quarter, courtesy of rookie Nerlens Noel (10 points, 6 steals, 5 assists):

It’s safe to say the Oklahoma City Thunder really miss their stars, Kevin Durant and Russell Westbrook. Right from the get-go, Brooklyn played a mean host with an extra boost from their own star in Brook Lopez (18 points and 6 rebounds) who finally made it back on the court following last season’s foot injury. He did this in his return with a little help from Kevin Garnett:

The Nets scored 32 points in the first quarter compared to the Thunder’s 19, and they only widened the gap from there. OKC’s Reggie Jackson (23 points, 5 assists, 7 turnovers) returned to the hardwood last night too, after missing the opening games of the season with a sprained ankle. But that simply wasn’t enough for this downsized Thunder team that only had nine players in their rotation.

Last night marked the 10th anniversary of the Grizzlies playing at the FedEx Forum, and the celebration was pretty sweet—a win that kept Memphis one of the three unbeaten teams in the League. Three Grizzlies starters recorded double-doubles on the night—Zach Randolph (15 points and 11 rebounds), Marc Gasol (16 points and 11 rebounds) and Tony Allen (12 points and 11 rebounds)—which accounted for Memphis’ 16th consecutive regular season home victory. The defensive-minded Grizz only allowed the Pelicans 81 points on 33.7% shooting, a stark downgrade from New Orleans’ average of 102.5 points on 42% over their first week of games. With the yellow and blue confetti raining from above, Memphians returned home happy.

A game that looked like it’d be a massive blowout ended up going down to the wire thanks to a #3QofDoom (usually experienced by last season’s Knicks) for the Mavs. Boston outscored Dallas 38-24 in the third quarter, cutting down a lead that was as great as 31 points. Boston’s Jeff Green (35 points) and Rajon Rondo (15 assists) recorded a couple game-highs, and Avery Bradley (32 points) set a new career-high for himself. With less than a minute left in the game, Monta Ellis (14 points and 6 assists) fouled Bradley as he attempted a three. He hit only two out of three to make it a 1-point game before Ellis responded back with a lay-in. Off a missed three from Green, Chandler Parsons (29 points) tried to obtain a board that led to an important jump ball—one he’d win—and the Mavs hung on to seal their third W in a row.

With 13 lead changes, 17 ties and the biggest lead not extending beyond 7 points, this close game was a hard fought battle. Sacramento saw 40 of its points coming from the free-throw line, while Denver hit 28 from the stripe. Ty Lawson’s 12 assists on his birthday and seven other Nuggets scoring double figures weren’t enough to get Denver a second win this year. Instead, the Kings enjoyed the victory led by Darren Collison (21 points and 6 assists) and DeMarcus Cousins (19 points and 5 rebounds) to get off to their best start since the 2010-11 season.

Two-time Sixth Man of the Year, Jamal Crawford (19 points and 5 assists), scored his 15,000th point in the Clippers’ win over the Jazz last night. He and the rest of the L.A. squad—most notably Blake Griffin (31 points and 9 rebounds) and Chris Paul (13 points, 12 assists, 10 rebounds) with his first triple-double as a Clipper—handled Utah quite well to snag their third win of the season. The Jazz acquired their third loss of the season, despite solid performances from Gordon Hayward (27 points, 7 rebounds, 5 assists) and Enes Kanter (17 points and 9 rebounds). They’ll have to search for their second victory elsewhere.