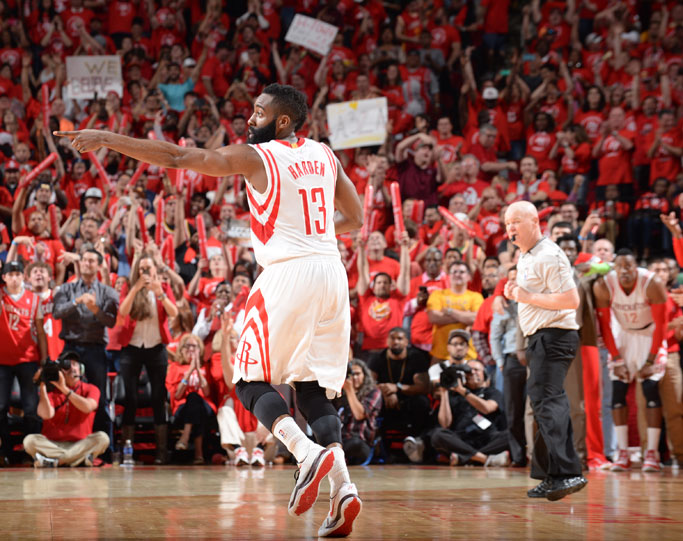 What a strange, strange, strange game. The Rockets came out comically hot last night, riding James Harden’s supporting cast to 45 first-quarter points and an early 23-point lead. They held a 19-point edge into the middle of the second quarter, when Stephen Curry went down with what appeared to be a serious neck/head injury. Curry checked out and suddenly it was his supporting cast thriving. Golden State trailed by just ten at the break.

The second half was a classic game of cat and mouse, with the Rockets staying ahead by about 12 to 18 points and the Warriors battling back. Before long, though, Harden took over the game and, despite a happy return from Curry, led his team to a clutch victory.

Harden dropped 45 in all, connecting on 13 of his 22 shots, 12-13 free throws and 7-11 treys. He was incredibly sharp down the stretch, seemingly burying a three every time Golden State gained some momentum. He’s played three phenomenal games against the Warriors, and is now averaging roughly 32 points per game on better than 50 percent shooting for the series.

Josh Smith added 20 points (7/8 field goals, brutal 3/12 free throws), Trevor Ariza scored 17 and Dwight Howard posted 14 and 12. Howard wasn’t quite as dominant as he’s been recently, but, still, his play this series has been inspiring.

Meanwhile, Curry played 31 minutes and finished with 23. He looked pretty shaky upon returning in the second half, but found his groove after a few minutes. Klay Thompson led the team with 24, and Draymond Green posted 21 and 15 with 5 blocks before fouling out after 40 incredible minutes.

Huge win for the Rockets, and, all things considered, not such a bad loss for the Dubs. Curry looks fine and should certainly be a go for Game 5 on Wednesday night, and everybody else played pretty well. That being said, A+ Harden, who we saw last night, is a scary, scary dude. The Rockets flipped the series on the Clippers’ heads in a flash, and always carry immense potential. Golden State should be able to close them out, but they better be careful on Wednesday night. The thing could shift back to Houston for Game 6, and I’d hate to have to beat Harden in a Game 7…