Post Up: Jaylen Brown Beats The Jazz At The Buzzer 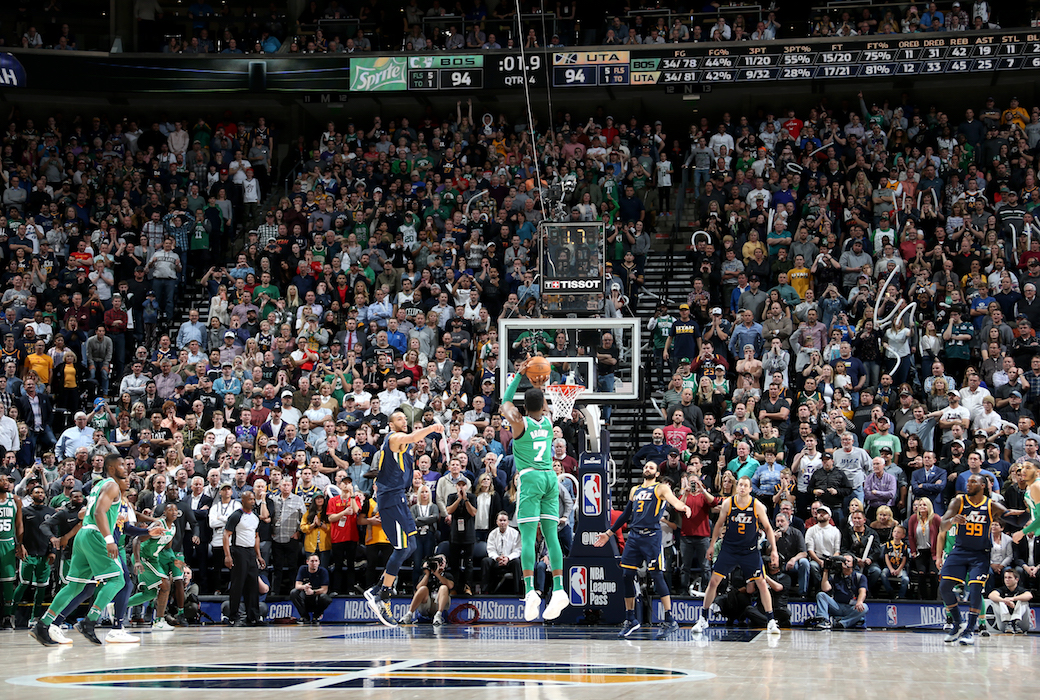 Jaylen Brown hit a three with 0.1 seconds to go to give the still-shorthanded Celtics a thrilling road win. He finished with a team-high 21 points as one of five Celtics in double figures. Donovan Mitchell scored 22 for the Jazz. Boston has now won five in a row and Utah has dropped three of its last five.

JAYLEN BROWN WITH .1 TO GO! (via @nba) pic.twitter.com/SEba0jx4pe

Dario Saric had 26 points and 14 rebounds to lead the 76ers to their eighth win in a row, but it came at a cost. Joel Embiid suffered a facial injury after colliding with Markelle Fultz in the second quarter and did not return to the game. He was taken to the hospital and evaluated, and does not have a concussion. Ben Simmons just missed a triple-double with 13 points, 10 rebounds, and eight assists. Michael Beasley and Emmanuel Mudiay each had 22 for the Knicks.

A nice start to the second half. pic.twitter.com/QQuuJkicrF

Seven Nets players scored in double figures, led by D’Angelo Russell (16 points, 12 assists) as Brooklyn snapped a three-game losing streak. The Nets began the fourth quarter on a 17-2 run to go up by as many as 19 and coast in the final minutes. Nikola Vucevic led the Magic with 24 points.

You might want to watch this a few times pic.twitter.com/7OOt6p4r0h

LeBron James scored 41 and had 10 rebounds to go with eight assists as the Cavs took care of Charlotte on the road. The story of the game, however, was the seventh-year point guard for Charlotte — Kemba Walker scored 21 (11 in the fourth quarter) and became the Hornets’ all-time leading scorer on a layup in the final seconds of the game. He led the Hornets in scoring on Wednesday, but as a team they shot just 5-21 from three and committed 13 turnovers compared to just six for the Cavs.

THERE IT IS!!!!! KEMBA WALKER IS THE NEW CHARLOTTE HORNETS ALL-TIME SCORING LEADER! pic.twitter.com/A5r2xiIooW

Memphis outscored Portland by 10 in the fourth quarter to steal a win behind 21 points from MarShon Brooks. He scored 14 in the final frame as the Grizzlies won consecutive games for the first time since mid-January. CJ McCollum had 42 to lead all scorers, but the Grizzlies hit 13 threes. Brooks alone was 5-5 from three and Chandler Parsons (15 points) went 3-7.

Karl-Anthony Towns scored 56 points, setting the franchise single-game scoring record, to lead the Timberwolves over the Hawks. Towns’ 15 rebounds also gave him his 63rd double-double of the season, a league-best. Andrew Wiggins tossed in 17 points of his own and Jeff Teague had eight assists. Mike Muscala had a career-high 24 for Atlanta off the bench.

Tobias Harris scored 27 points and hit five of his six attempts from three to lead the Clippers over the Suns. DeAndre Jordan added 13 points and 15 rebounds. The Suns struggled from the field, shooting 43 percent overall and 29 percent from three. Tyler Ulis scored 23 to lead Phoenix.

Brook Lopez had 22 and Julius Randle had 20 more as the Lakers topped the Mavericks in the late game on Wednesday. It sent Dallas to its sixth loss in seven games. 12 different Mavericks scored, though only four finished in double figures, led by Harrison Barnes, who scored 17. The Lakers, despite their losing record overall, are now 19-16 at home.

Kuzma spins and gets the hook shot to fall #LakeShow (📺: @SpectrumSN & @spectdeportes) pic.twitter.com/3snHBbHwve