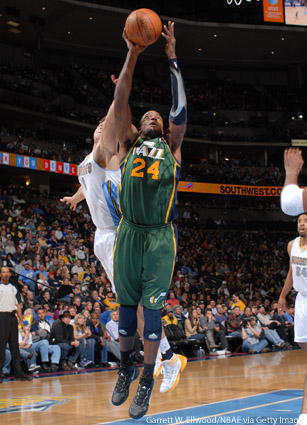 Only three games last night, as the NBA gave way to the NFL on Sunday and geared up for a big Monday of hoops action. I’ll use the rest of my intro space here to declare my allegiance to the San Francisco 49ers in the NFC, and point out that my Washington Redskins beat the Giants not once, but twice this season. And the Skins were horrible. (Although they may still finish with more wins than the Wizards…) Back to the hardwood we go, where Tim Duncan turned back the clock against the Suns and Paul Millsap did the damn thing in the fourth quarter versus Denver.

The Pistons headed to halftime with a 48-44 lead, but Golden State used an 8-0 third-quarter run to take the lead, and never looked back, riding big days from David Lee (24 points, 10-12 FG, 6 rebounds) and Monta Ellis (22 points, 17 in the second half) to their first road win of the season. Dorell Wright shot just 3-for-13 and 1-for-6 from three-point range, but finished with 11 points and 11 boards, and the Warriors got double figure scoring outings off the bench from Brandon Rush (12), Nate Robinson (10) and Ekpe Udoh (10, plus 4 blocked shots). As a team, the W’s shot 52 percent from the field, and scored 20 fast break points. Once again, Greg Monroe and Tayshaun Prince went off for Detroit, but it wasn’t enough—Monroe had 25 and 8, Prince 20 and 7. The Pistons fell to 3-10 on the season, currently last place in the Central Division and tied for the second-worst record in the Eastern Conference. Things don’t get much easier for the men from the Motor City, as they get 5 Western Conference foes before hosting Miami at home.

Before I get into the big win for the Jazz, I have to say, the award for ugliest jerseys we’ve seen so far this season has officially been awarded to Utah, with these hideous green guys. On to more important matters: Paul Millsap scored 16 points in the fourth quarter (including a string when he rattled off 14 straight) and the Jazz opened up a late lead to beat the Nuggets, who were coming off an impressive win against the Heat on Friday. Millsap finished with 26 points and 12 rebounds, Gordon Hayward had 19 and Al Jefferson scored 18 to go with 12 boards to help Utah improve to a surprising 8-4. Are the Jazz for real? Their four losses came to the Spurs, the Lakers (twice) and the Nuggets the last time these two played, while they have a win list that includes Philly, Memphis and now Denver. This week should tell us a lot about the Jazz, who host the Clippers and the Mavericks over their next two games. The Nuggets came in averaging a league-best 24 assists per game, but were out-assisted (?) by a 27-21 margin by Utah, which also shot 52 percent from the field as a team. Denver was led by 18 points apiece from Nene and Danilo Gallinari (12-12 from the free throw line) and Ty Lawson had 13 points and 8 dimes, but they missed 13 free throws and had no answer for Millsap down the stretch. The Nuggets dropped to a half-game behind the Jazz and a full 3 games behind division-leading Oklahoma City in the Northwest division.

Tim Duncan partied like it was the early 2000s, dropping a vintage 24-point, 11-rebound performance, plus 4 assists and 2 blocks, and the Spurs improved to 9-0 at home and 9-4 overall. It’s still ridiculously early, but San Antonio is 2nd in the Western Conference, and in yet another year when experts and pundits deemed them to be too old, they’ve hung tough, averaging 101 points per game (4th in the League) even without Manu Ginobili. Tony Parker had 17 points and 9 assists, and rookie Kawhi Leonard added 12 and 8 boards in his third NBA start. Steve Nash had 20 points and 10 dimes for the Suns, and Marcin Gortat matched Duncan’s number with 24 points (plus 15 rebounds). But Channing Frye and Michael Redd shot a combined 0-for-11 (0-for-4 from the three-point line) and Phoenix could never get quite close enough in the fourth quarter to make this one a game, falling to 4-8 on the year. On the bright side, rookie Markieff Morris had another nice game off the pine, with 14 points in 25 minutes (6-10 FGs). Both teams have huge Tuesday games up next, as the Suns are in Chicago—Nash vs. DRose—and San Antonio heads to Miami.

Moment of the Night: Monta Ellis with the ridiculous circus shot for two of his 22.

Dunk of the Night: My guy Jeremy Evans with the put-back slam against the Nuggs.

Today: MLK Day is a holiday tailor-made for NBA hoops. Assuming you have the day off, sit back and enjoy 11 basketball games tipping off at 1 p.m. with Bulls-Grizzlies on ESPN and ending with a late-night matchup between the Mavericks and Lakers. In between, keep an eye on Magic-Knicks, Thunder-Celtics and the Clippers host the Nets with or without CP3.