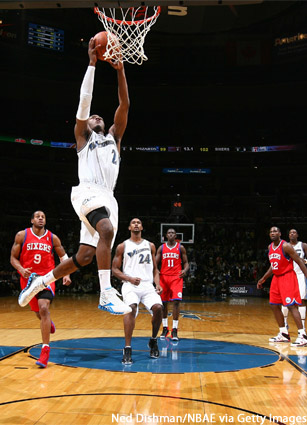 After a full day at the SLAM Dome yesterday, I got home, did a quick interview with a high school baller for the next issue (no sneak peaks here, punks) and told myself I’d get in some quick shuteye before the games got going. Well, you know how that goes. I woke up several hours later, confused, and with a full set of NBA action all wrapped up. Someone get the SLAM overlords to hook this kid up with an alarm clock. It’s a Post Up tax write-off!

But, the positive: While you guys were sleeping the night away, dreaming about hitting that Game 7 half-court buzzer beater and who knows what else, I was up and at it, wearing out the TiVo, analyzing box scores, and watching/re-watching all the highlights to make sure I’d be caught up. No days off at TPU, kids (whatup Anton!). Word to Wale. The things we do for you, I swear…

Alright, I’m well-rested and ready to roll. Let’s get on with it.

Asbestos? That’s what’s hot in the streets? (© Chappelle) OK, it happens. It does? I guess. Just make sure that’s all cleaned up for when John Wall and Co. come to NYC on Friday. It’s gonna be the hottest ticket in town—though Due Date doesn’t make for a terrible second option. Speaking of JW…

A dope battle between two young, up-and-coming Eastern Conference teams. It was close all game, and as time expired in regulation, Cartier Martin (can we get this dude a sweet nickname already?) found an opening and was like, “At this range? With this caliber?“—cooly sinking an Iggy-contested J to tie things up as regulation ended. The John Wall Show—which started around tip-off and ended with the final whistle—continued into extra play, and the rook ended with a ridiculous stat line of 29 points, 13 assists, 9 steals, and, um, 8 turnovers, as the Wiz jumped ahead in OT and held on by a hair. For the Sixers, Lou Williams dropped 30 while Elton Brand went for 21 and 9 and hit some big baskets before fouling out. The man picked right behind Wall, Evan Turner, came off the bench and scored 9—all in the fourth quarter. Philly’s got Indiana at home tonight.

JJ Hickson did some damage for the Cavs, dropping 31, while Anderson Varejao grabbed 12 boards, but this one was all ATL. Don’t look now, but the Hawks—the squad that didn’t bring in any new players this summer—are 4-0. One playoff collapse doesn’t rid a roster of its talent, you know, and this team is still real solid. Marvin Williams led the way for Atlanta with 22, and Josh Smith contributed across the board with 6 points, 11 rebounds, 4 assists, 2 steals, and 5 blocks.

Rajon Rondo just keeps on dishin’. Last night he had 17 dimes, which amounts to 67 through four games. Incredible. But check Boston’s numbers as a team: 42-81 FGM-A (51.9 percent), 18-18 FTM-A (100 percent, I think), 33 assists, 8 turnovers. With that kind of efficiency, they aren’t losing. To anyone. Shaq sat this one out, but the Pistons’ frontline didn’t step up and make the Celts pay too much. Charlie Villanueva led Detroit with 17 points in the losing effort.

The Trail Blazers did that weird thing they do where they win but you can’t really tell how it happened. Wesley Matthews came off the bench and led them with 18 points, while Brandon Roy scored 17 and LaMarcus Aldridge had 14. Looks like they’ve recovered from what seemed to be a pretty rough loss in Chicago last night. The Bucks came out strong (up 27-21 after one) but struggled offensively—they shot 37.5 percent—and just weren’t able to match Portland’s energy.

And these dudes keep on cruising. DWade put in 26, while LeBron scored 20 but distributed 12 dimes. Chris Bosh (13 and 6) still hasn’t gotten going—as if you needed another reason to fear just how good the Heat can be down the road. James Jones keeps loving life in the Mike Miller role, as he went for 17 points and 5 threes. Kevin Love led Minnesota with 20, while Darko Milicic, presumably shook after seeing all of his ’03 Draft friends in one place, blanked out and scored 0 on 0-5 shooting.

Looks like the Lakers are already in mid-season mode. They jumped out to an 11-point lead after a quarter, and never turned back, leading by 29 at one point and rolling smoothly to the W. Pau (21-13-5) was the better Gasol, as Marc (11-6-5) couldn’t keep up with his bro’s array of post-moves and such. Kobe also played well, scoring 23 in only 26 minutes. Rudy Gay went for 30, but it was a bit of a waste—Memphis never really stood a shot. The $45-million man Mike Conley scored 16 and passed out 8 assists, so the jury on the contract is still out, though something tells me Michael Heisley will be guilty until proven innocent for that one.

Performance of the Night: John Wall: 29 points, 13 assists, 9 steals, 2 rebounds
Moment of the Night: This is one of those things that players sometimes do, knowing in the back of their minds, “Man, if I do this, I’ll definitely get The Post Up’s Moment of the Night.” Yes, it’s true: Dougie your way through the pre-game intro, and you’re an early favorite for MOTN honors.

A 12-game full course is on tap for tonight, peeps. And some good ones, too: OKC-LAC, Spurs-Suns, New Orleans-Houston, Milwaukee-Boston, plus more. Set your alarms.