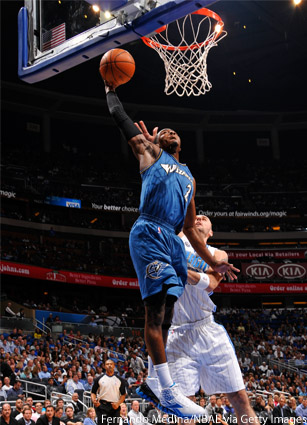 In his first NBA game, John Wall didn’t exactly fly over the bar Blake Griffin set the night before. After the Clippers‘ rookie astounded fans and garnered some (very) early Rookie of the Year buzz, Wall failed to match Griff against an Orlando team that made a helluva first impression. The Wizards’ guard finished with a modest 14 points (6-19 from field) and 9 assists, though to his credit, got little-to-no help from, well, anyone. Washington’s highest scorer was Cartier Martin—who actually played alright—with 17, and Kirk Hinrich (12 points) was the third and only other Wizard in double figures. In the meantime, the Magic cruised, jumping out to a 29-15 lead after one and never looking back. Dwight Howard dominated the Wizards’ big man rotation (JaVale McGee, Andray Blatche, Hilton Armstrong), scoring 23 and grabbing 10 boards, while Vince Carter shot well (8-12) and dropped in 18. Nobody’s expecting Flip Saunders’ team to perform particularly well this season, but, if nothing else, they’ll be a hell of a lot more interesting when Gilbert Arenas returns in a few games.

And despite all this Washington-focused negativity I’ve been spewing, there’s still something incredible about seeing Wall in the open floor—I really don’t think a brick wall could stay in front of him. These guys might collect their share of L’s, but their point guard will undoubtedly remain a constant source of excitement and hope. So they have that goin’ for them, which is nice.

Right from the jump, this one was straight up All Phoenix Everything. In a game that Utah didn’t lead for a single possession, the Suns and their “Let Steve Nash run around until he finds someone open for three” offense prevailed behind their point guard’s 18 points and 5 assists. Hakim Warrick went for 18 and 11, while Jason Richardson shot 7-14 and also scored 18. The Jazz were completely flat, though they did have some nice stat lines: Al Jefferson bounced back with 20 and 9; Andrei Kirilenko fought through the odds and somehow overcame the world’s worst haircut to drop 19; and Paul Millsap‘s 19 and 13 will make some fantasy owners happy.

Alright, that’s it for me. The homie Anton will hold you guys down over the weekend, and I’ll be back Monday to kick off my first full week here at TPU. Stay safe, SLAM Fam.