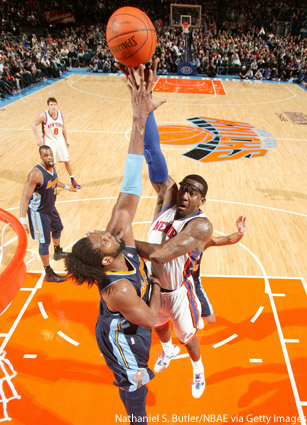 So the Knicks are pretty good this season, huh? After a whole bunch of wins against subpar teams, this was expected to be their first real challenge, and a challenge it was. The two crews traded buckets—without much defense—all game long, and some clutch hoops from Amar’e Stoudemire (who had 30 points, giving him eight straight with 30-plus, a franchise record) and a couple of timely stops from New York made all the difference. Ray Felton handled the ball masterfully, scoring 19 and dishing 17, while Wilson Chandler was the Knicks’ role player du jour, putting in 27. Shortly after the contest, it was reported that Carmelo Anthony (31 points, 13 rebounds) would only accept a trade to MSG—a decision that (if true) most likely came as a result of seeing the Garden inundated with energy after the Knickerbockers won their eighth straight. They’ve also defeated their opponents 13 of the last 14 games, and will take on the Celtics at home Wednesday night. Color me excited.

Speaking of teams making some moves, the Spurs won again last night. They became the League’s first 20-victory group, moving to 20-3, and at this point are looking the Lakers’ primary in-conference competition. (I see you, Mavs.) George Hill was great, going for 22 points and 3 three-pointers, and the seemingly reborn Manu Ginobili put in 18 off 6 of 12 shooting. San Antonio will try to keep the incredible start in tact Wednesday night, when they host the Bucks.

It was all good just a couple of weeks ago. The Hornets’ bad run persisted, as they lost for the sixth time in eight games, falling to 14-9 and continuing to negate their solid start. The Sixers, meanwhile, are quietly hot, winning five of seven. Both losses were close ones to good teams (Celtics and Hawks), too, so don’t underestimate these guys at all. Neither squad played especially well, but the Bees were just terrible—they shot 30.4 percent from the field and 73.9 percent from the charity stripe. Eek. Can’t even blame it on their leader, CP3, who scored 25 on 8-12 shooting. Every one else, simply put, was awful. Oh, and one more thing: New Orleans scored 23 points in the first half. Yes. Two quarters, 23 points. Rough times indeed.

After a surprisingly close first three quarters, this game was sealed after Kobe did what he does, scoring 25 of his 32 in the second half and finding Lamar Odom and Pau Gasol for some clutch baskets down the stretch. It still seems worth mentioning, though, that after a close win against the Clippers, a loss to Chicago, and another tight victory against the Nets, the Lakers ain’t been lookin’ like the usual Lakers as of late. They’re in the middle of a hell of an East Coast road trip, which’ll continue at Washington tomorrow night.

From the field, the Thunder shot 53.2 percent, while the Cavs shot 33.8 percent. That’s pretty much all you need to know about this one. (Though I’d recommend peeping the MOTN below.) Kevin Durant scored 25, but didn’t need to play any more than 30 minutes, as OKC cruised en route to an easy W. Unfortunately for Cleveland, they’re off to Miami, where they’ll play that guy who used to be on their side Wednesday night. It’ll be interesting to see how the South Beach crowd treats the incoming Cavaliers, assuming a South Beach crowd actually shows up. How many people constitute a”crowd” these days? Twenty? Sixty?

Now that the #FreeKevinLove campaign has slowed down, how long until the #FreeBlakeGriffin movement gains steam? Professor Griff scored 26 and grabbed 16 boards, but the Clips lost again, falling to a deeper and more balanced Magic group. (Eric Gordon did score 28 and dish 8, for what it’s worth.) Dwight Howard was plagued by foul trouble, but still managed 22 points and 8 rebounds in 25 minutes. Brandon Bass stepped up in his absence, putting up a 13 and 11 double-double as Dwight played the sideline.