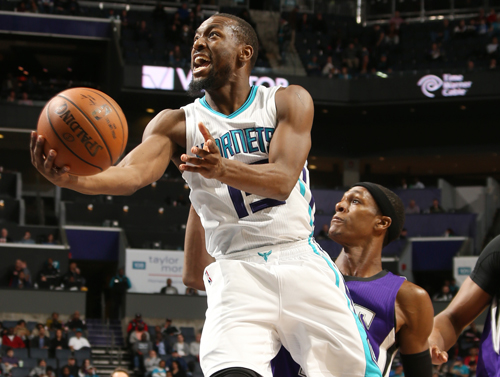 Just when you thought Kemba Walker (39 points, 6 rebounds, 5 assists) sank the game winner…Rudy Gay answered to send the game to overtime. Charlotte would prevail in OT however and claim the home win over the Kings, even with DeMarcus Cousins (30 points, 11 rebounds) making people fall over and Rajon Rondo endlessly dishing out dimes (14 points, 20 assists, 8 rebounds).

The young Magic are some kind of show stoppers, with their numerous dunks coming from guys like Victor Oladipo and Aaron Gordon. But them 90’s kids still have a ways to go before they catch up with LeBron James and the Cavaliers. James, with his 15-point, 13-assist double-double joined Oscar Robertson as the only players who rank in the top 25 in both the career points and assists categories. Congrats, Bron! Love was the high-scorer for the Cavs with 34, and J.R. Smith added another 26 in the W.

The Knicks streak came to a rough end in Miami. New York put up a mere 30 points in the first half of the game and were unable to get things rolling well enough to get the win. Chris Bosh and Dwyane Wade posted 16 points a piece for the Heat, which was more than enough to improve their record.

Although a single point kept the Milwaukee Bucks behind the Detroit Pistons at the end of the first quarter, Greg Monroe (20 points, 13 assists) and his squad took over against his former team. Monroe and the Bucks outscored the visiting Pistons 63-36 in the second and third quarters, creating a gap far too wide to close. The home team shot a nifty 51.8 percent from the floor, while holding their opponents to 34.1 and only 6-28 from three-point land.

The Philadelphia 76ers came very close to their first win of the season when the Minnesota Timberwolves came to town, but Andrew Wiggins ruined any hope they had. With 32 points, 17 of which came in the fourth quarter alone, it’s clear Wiggs wanted to win. Badly.

With 24 points and 13 rebounds, Kawhi Leonard led his veteran San Antonio Spurs to a W over the visiting Phoenix Suns. The Spurs kept the Suns at only 84 points while also forcing 28 turnovers to remain undefeated on their home floor.

KD back! With 27 points on the night to go with 6 rebounds, 4 steals, and a win, we’re happy to see Kevin Durant is feeling good. Russell Westbrook added 20, and Anthony Morrow contributed 15 off the bench in OKC’s win over the Utah Jazz.