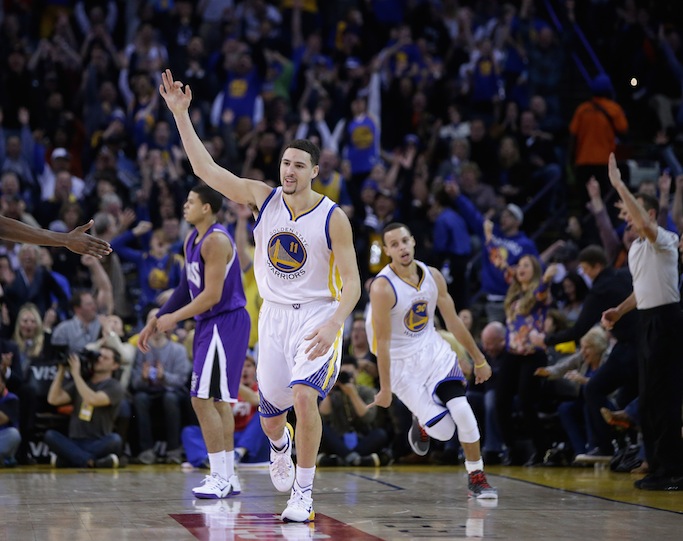 Newly announced All-Star Kyle Lowry (21 points, 5 assists, 5 rebounds, 3 steals) came alive in the fourth quarter to take down the pesky Sixers. The Raptors point guard poured in 17 of his 21 points in the fourth quarter. All of his points that quarter came from behind the 3-point line or at the free throw line as Lowry helped his team climb out of a nine-point deficit with 5:39 left in the final quarter. The Raptors even trailed 15-0 to start the game, but they climbed their way back. Patrick Patterson (14 points, 13 rebounds, 2 steals) added a double-double, providing energy and an interior presence off the bench. He does a great job attacking the glass while on offense. For Philadelphia, they continued playing scrappy basketball and remaining in games unlike earlier in the season. Nerlens Noel (12 points, 14 rebounds, 2 steals) is starting to figure out his game and Robert Covington (18 points, 6 rebounds, 2 steals, 2 blocks) is turning into a nice surprise. They still are very young and shoot too low of a percentage from the field night in and night out. They shot 38.3 percent from the field against the Raptors.

Behind another great performance from Jeff Teague (17 points, 9 assists), Paul Millsap (22 points, 10 rebounds, 2 blocks, 2 steals) and Al Horford (14 points, 12 rebounds, 3 blocks), the balanced Hawks have soared to a franchise-record 15th consecutive win. And it came with ease down the stretch. After Kevin Durant (21 points, 8-22 from the field) knocked down a free throw to start the final quarter, the Thunder only trailed 79-76. Durant and Russell Westbrook (22 points, 11 assists, 3 steals) were once again carrying OKC’s offense while the rest of the team struggled to find their touch. Serge Ibaka (13 points, 10 rebounds, 2 blocks) was the only other Thunder player in double-digits. After Durant’s free throw, the Hawks methodically went on 15-3 and led by double-digits the rest of the way. Atlanta is truly doing something special right now, as this 15-game winning streak has been against many quality opponents. They’re sharing the ball, helping on defense and getting quality looks almost every time down the floor. It seems as if every player knows exactly what their role needs to be and they can fulfill it.

LeBron James (25 points, 9 assists, 6 rebounds, 4 steals) led the way as the Cavaliers dismantled the Hornets for their fifth straight win. Leading wire-to-wire, the Cavs poured it on early as all five starters scored during a 28-9 blitz to start the game. J.R. Smith (21 points, 7-11 on 3-pointers) scored nine of these 28 points, lighting it up from deep. Al Jefferson (22 points, 11 rebounds, 3 blocks, 10-16 from the field), who is still recovering from a strained left groin, had a productive 23 minutes but didn’t get much help from his teammates. The Hornets weren’t able to get back in this game because every Cavs player that stepped on the floor scored a basket. Eight players scored at least eight points while the team shot 51.7 percent from the field. In his Cleveland debut, Iman Shumpert (8 points, 3-3 from the field) scored eight points in 10 minutes. The Cavaliers dominated every facet of the game Friday night, showing how dominant they can be when everything is clicking.

Luol Deng (23 points, 5 rebounds) and Chris Bosh (19 points, 4 rebounds) salvaged this game for the Heat as they almost let a 21-point lead turn into a loss. The Heat have had major struggles coming out of halftime this season, and it continued Friday night as the Pacers outscored the Heat 27-21 in the third quarter. Luis Scola (14 points, 7 rebounds) had an efficient 15 minutes on the floor while George Hill (13 points) and C.J. Watson (13 points, 4 rebounds) controlled the offense. They just kept digging themselves in holes and trying to fight their way out. After Deng made back-to-back 3-pointers with 5:13 remaining, the Heat held a commanding 84-74 lead. The Pacers quickly cut that to four points within a few minutes. However, Bosh and Mario Chalmers (9 points, 2 steals) both made some big shots to seal the victory. The Pacers only managed 14 assists on the night, compared to 18 turnovers.

Don’t look now but the Knicks have actually won a season-high three games in a row. With silver linings being so hard to come by, this streak had to be mentioned. Carmelo Anthony (25 points, 7 rebounds, 4 assists) gave this team a surge to start the fourth quarter while Jason Smith (season-high 19 points, 5 rebounds, 3-4 on 3-pointers) found his touch down low and outside. Unfortunately for Nikola Vucevic (34 points, 18 rebounds), this will have to go down as another monster performance in a loss. Since being traded to Orlando, Vucevic has been a double-double machine but can’t seem to have a major impact on whether or not his team wins the game. The Knicks had a great balance of attack including quality minutes from Lance Thomas (16 points, 4 rebounds, 4 assists, 2 steals), who is in the midst of his second 10-day contract. The Knicks actually shot worst from the field but managed to shoot 10-25 (40 percent) on 3-pointers.

The Bulls have not lost a game since their point guard called them out. Jimmy Butler (20 points, 8 rebounds, 6 assists, 3 steals) did a little bit of everything while the aforementioned Derrick Rose (20 points, 3-5 on 3-pointers) snagged a huge offensive rebound that sealed the win. Butler had 14 of his 20 points in the second half. Dirk Nowitzki (24 points, 7 rebounds) led the Mavericks in scoring. After Monta Ellis (17 points, 4 assists) converted a 3-point play, the Mavs only trailed 100-98 with 28.6 seconds to go. After Rose missed a layup with 6.9 seconds on the clock, the Mavs couldn’t collect the rebound—even with Tyson Chandler (10 points, 12 rebounds, 5 blocks) on the floor—and Rose tapped out his own miss. Even though this was only one play, it does act as a representation of the Mavs’ rebounding struggles. Even when Brandan Wright was still on the team, Dallas had its struggles in the interior. Now that he’s been shipped away, Chandler is having to carry almost the entire load down low. As a team fighting for home court advantage in the playoffs, it is pretty absurd to be outrebounded 47-30 in any game against any opponent. Rick Carlisle interestingly decided to bench Rajon Rondo (6 points, 4 assists) for the final 5:12 of the game as Devin Harris (9 points, 2-4 on 3-pointers) played the rest of the way. With Rondo playing at his best late in close games, many in the DFW community are trying to figure out Carlisle’s rationale behind this decision.

It might have been more difficult than they would have hoped, but the Pelicans grinded out their second straight win for the first time in more than a month. Anthony Davis (21 points, 12 rebounds) led the way (of course) while Eric Gordon (20 points, 5 assists, 8-13 from the field) had one of his best shooting performances of the year. Sometimes Gordon shows flashes of the high-octane scorer he once was with the Clippers. Tyreke Evans (17 points, 8 assists, 2 steals) played well at the point. The Timberwolves had a balanced attack as six players scored in double figures. However, there wasn’t anyone who had the ability to take the game over and really cut into the deficit. Thaddeus Young (15 points, 4 assists) was the leading scorer with only 15 points. It was as close as 73-70 with 7:37 to go after Chase Budinger (10 points, 4 assists) made a nice running jumper. The Wolves, though, wouldn’t be able to get any closer the rest of the way. Neither team showed much desire to shoot the long ball as they combined to shoot 5-13 on 3-pointers.

Kawhi Leonard (15 points, 14 assists, 2 steals) earned himself a double-double as the veteran Spurs easily took down the young Kobe-less Lakers. This game was practically over before it even had the chance to start as Tony Parker (17 points, 4 assists), Danny Green (7 points) and Tim Duncan (14 points, 7 rebounds, 2 blocks) helped the Spurs jump out to a 9-0 start. They would go on to lead 25-8 towards the end of the first quarter and cruise to a victory the rest of the way. The Lakers had a lot of shooters Friday night but not many distributors. Seven Lakers attempted at least eight shots; Carlos Boozer (10 points, 7 rebounds) and Jordan Clarkson (11 points, 4 assists) were the only players to shoot above 50 percent as the team shot 39.8 percent on the night. Nick Young (17 points, 3-6 on 3-pointers) led the Lakers in scoring. With the victory, the Spurs have started to build some momentum and have won five of their last six.

A night after Evan Turner (10 points, 6 assists) hit a 3-pointer to give the Celtics a one-point win against the Blazers, Avery Bradley (18 points, 6 rebounds, 4-5 on 3-pointers) hit a go-ahead trey with 1:24 remaining followed by a two-point jumper to push the lead to three points. And going back to a few minutes before then, Bradley hit another 3-pointer to turn a deficit into a lead. Bradley really came through for the Boston Friday night and seems to gradually be improving with the departure of Rajon Rondo. With Bradley locked up contract-wise, this is exactly what the Celtics front office hopes to see more frequently. The Nuggets got a huge double-double from J.J. Hickson (15 points, 14 rebounds, 2 steals), but he still struggles to provide any sort of interior defensive presence. With Ty Lawson not playing, Jameer Nelson (23 points, 7 assists) had one of his best games of the year and kept the Nuggets in this game. No one, though, could slow down Bradley down the stretch. The Nuggets have now lost five in a row while the Celtics are suddenly right back in the discussion for the East’s eight seed.

If it wasn’t for Klay Thompson, the story of the night would have come from the man with the beard. James Harden (33 points, 10 assists, 6 rebounds, 3 steals) continued his MVP campaign by netting the game-winning 20-foot buzzer beater to give his Rockets their 30th win of the season. Eric Bledsoe (25 points, 9 assists, 8 rebounds) led the way for the Suns but only scored four points in the final quarter. Phoenix definitely went down swinging as they sprinted back into this game in the fourth quarter. After Harden got all the way to the rim for a layup with 6:11 to go in the game, Houston comfortably led 102-86. Behind big time shots from Isaiah Thomas (22 points, 5 rebounds, 4 assists) and both Morris twins, the Suns came all the way back to tie it 111-111. These three were fantastic down the stretch, bringing life back into U.S. Airways Center. Unfortunately for the Suns fans attending, Harden calmly sunk one of the biggest shots of the year to cap off another stellar performance. If the Rockets remain in the top four of the West by season’s end and Harden remains their focal point offensively, he’ll certainly have a case for being named MVP.

Where to start…Klay Thompson (52 points, 5 assists, 4 steals, 2 blocks, 16-25 from the field, 11-15 on 3-pointers) did something Friday night that no NBA player has ever done in the history of the sport. The young guard torched the Kings for 37 points in the third quarter, which is an NBA record. He also made nine 3-pointers in those 12 minutes—another League record. He singlehandedly outscored the Kings 37-22 in the quarter and put the game out of reach. He finished with a career-high 52 points and tied Mo Williams for most points in a game this season. Thompson’s previous scoring high was 41…which he almost broke in 12 minutes. This was truly a once-in-a-lifetime experience that every single player, coach and fan will remember for the rest of their lives. (I think Thompson also locked his spot into the All-Star Game.) Other players did surprisingly play in this game as well. Stephen Curry (10 points, 11 assists) had a quiet double-double while Marreese Speights (19 points, 6 assists, 20 minutes) had another productive performance in his short time on the court. DeMarcus Cousins (28 points, 11 rebounds, 3 steals) seemed to be the only Kings player that showed any form of motivation to keep playing. Thompson just kept hitting shot after shot and sucking the life out of the Kings. This was certainly a showcase for the ages.