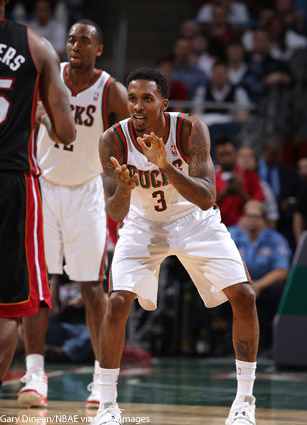 Philadelphia has now passed the first and second tests of a ridiculously difficult seven-game stretch, leading by as many as 20 and using a 26-11 third quarter to get past MVP Derrick Rose and the Bulls. DRose finished with 18 points and 6 assists, but Andre Iguodala and Thaddeus Young dropped 19 points apiece and the Sixers turned some heads with a fairly painless win over Chicago. Philly is a fun team because they love to make the extra pass—they had 26 assists as a team and four players had at least 4 assists, including 6 from the team’s leading scorer, Lou Williams, and one fancy dish from Iggy (who also threw one down with authority on the break at one point). The Bulls, who dropped to 18-6 but still cling to the top spot in the East, struggled to get offensive production outside of Rose and CJ Watson, who led the team with 20 off the pine. Philadelphia improved to 16-6, 12-2 at home, and has won 4 straight. As for that murderer’s row of an upcoming schedule, the Sixers’ (who are in a logjam at the 2-spot in the Eastern Conference currently) next five are as follows: Heat, Hawks, Lakers, Spurs and Clippers.

Once again, Orlando gets bailed out by scheduling—hey, helps to have Charlotte and Washington in the division, huh? The Magic, losers of four straight heading into last night, got back on track against my Wizards behind 23 points and 18 boards from Dwight Howard, who actually shot a decent percentage from the free throw line (11-of-16) for once. Ryan Anderson had 6 three-pointers and 23 points, including the nail in the coffin from deep range to finally put away the pesky Wiz, who got surprising performances from Rashard Lewis (20 points), Shelvin Mack (career-high 12) and Kevin Seraphin (12). Unfortunately, John Wall had a god awful shooting night, making only 1 of his 12 field goal attempts and finishing with 2 points (he did have 10 assists and 7 rebounds). It was Nick Young’s 24 points, including some ridiculous threes in the final two minutes, that kept Washington within striking distance—within four with 34 seconds to play—and Orlando fearing another meltdown. But the Magic escaped, even without Jameer Nelson and Jason Richardson, to improve to 13-9 on the year. Oh, and sorry Larry Hughes. Maybe next come back.

A night after suffering a smackdown at the hands of the Knicks, the Pistons found an opponent more their speed. And lost again. Detroit fell to New Jersey despite the Nets dressing only 8 players, which included Keith Bogans, who played 18 minutes and scored 2 points just hours after joining the team. Deron Williams racked up 26 points and 9 assists and Kris Humphries put up a 18-8-5 line. It was DWill’s fifth straight game with 20+ points and the Nets are now 8-15, while the Pistons have settled in the basement of the Eastern Conference at 4-20. Detroit is the only NBA team with 20 losses. And yet, they were in this game until the final buzzer, when a Brandon Knight (15-5-4) heave was off the mark. Actually, the Pistons had possession down two with under 30 seconds to play, but had to settle for a tough Tayshaun Prince (21 points) turnaround jumper on an isolation play, and it was quite the brick! Two weird bonus videos from this game, both fan-related: awesome dancing and annoying yelling.

LeBron James scored 40 points, and Milwaukee is without Andrew Bogut, and yet the Bucks beat Miami for the second time already this season, despite a red-hot start for James and the Heat. After one quarter, the Bucks were 40-23, and LeBron had outscored Milwaukee by himself, with 24 points in the first. Unfortunately for the Heaters, they scored just 57 points the remainder of the contest. Brandon Jennings went HAM in this game—he gave the Bucks a two-point lead on a floater in the lane with 11+ minutes to play in the fourth quarter. And then came the rain. Young Money hit 3 of his insane 7 threes on the night during a critical fourth-quarter stretch to get the crowd involved and put Milwaukee out in front, and the Heat could do nothing to stop him. Jennings finished with 31 points, 8 assists, 4 rebounds, 4 steals and zero turnovers. Oh, and that LeBron character? All he did was drop a season-high 40 points, plus 8 boards and 5 dimes. But it simply wasn’t enough. The Bucks’ balanced scoring attack and 30 assists as a team outdid LBJ and 23 from Dwyane Wade, as the Heat were hurt by 18 turnovers, 7 of which came from LeBron. As a reward, the Bucks get to play the Pistons next. Congrats, fellas.

Steve Nash scored 30 points, had 10 assists and “passed” Kevin Johnson as the Suns’ all-time franchise leader in assists on a fast-break dish to Josh Childress, en route to a blowout victory over the sinking Hornets. “Machine” Gortat added 23 points and 11 rebounds and Channing Frye had 16 as Phoenix bumped its record to 8-13. This game featured 20 lead changes and 15 ties, and the Hornets were within 1 point as late as 8 minutes to go in the game after a Greivis Vazquez three, but the Suns outscored New Orleans 32-16 in the fourth quarter and 64-44 in the second half, while shooting 53 percent from the field. Vasquez had his best game of the year, with 20 points (7-10 shooting), 12 assists and 6 rebounds in 28 minutes off the bench, but the Hornets turned it over 17 times and fell to 4-18 on the season, good for worst in the Western Conference.

Don’t know about you, but I’d pay to watch these two tangle in another Western Conference Final. It seems like every game they play is an instant classic. This time, the Thunder came out on top, thanks to 33 points from Russell Westbrook, 23 points and 13 rebounds from Kevin Durant, and a double-double you don’t see every day from Serge Ibaka, who finished with 11 rebounds and a career-high 10 blocked shots. Dirk Nowitzki, meanwhile, scored just 8 points on 2-of-15 shooting while battling a sore right knee. Jason Terry led the Mavs with 25 points, but Dallas shot only 36 percent from the field as a team and watched a nine-point first half lead disappear—in the third quarter, the Mavs shot just 3-for-19, scoring only 14 points. From the highlight reel department, here’s Russ skying high on a lob from James Harden. And from the lowlight department, enjoy Rick Carlisle kicking the crap out of the basketball. Naturally, he was ejected.

Danny Granger scored 29 of his 36 points in the second half, pushing the Pacers to 9-5 on the road and 15-6 overall despite 21 points and 17 rebounds from Kevin Love. Indiana held the Timberwolves to a 37 percent field goal percentage, and Minnesota made just 3 of their 17 three-point attempts. Granger did it all for Indiana, hitting 5 threes, grabbing 7 rebounds and pushing the Pacers to the win in his team-high 41 minutes. It helped that Darren Collison totally outplayed Ricky Rubio—Collison had 20 points, 9 assists and 6 boards, while Rubio finished with 10, 6 and 4, all of which you can watch for yourself in one handy highlight reel. JJ Barea made his return for the Wolves, scoring 7 points on 2-of-8 shooting in reserve minutes. Actually I shouldn’t say “Wolves,” since Minny was decked out in their throwback uniforms last night to match the Pacers joints, which I love. Which ones did you like better?

The Spurs trailed by 18 as late as the third quarter, before Tim Duncan went all Timmayyy on the Rockets, scoring 16 points in the quarter to begin San Antonio’s march back. Danny Green’s three-pointer with 7 minutes to go gave the Spurs their first lead since the opening quarter, and they finished the game on an 8-0 run. By game’s end, Duncan had racked up 25 points, and Tony Parker scored 24. Houston, meanwhile, had more assists and more rebounds than the Spurs, and held a massive lead early on, but turned the ball over 20 times, negating a nice performance from Kevin Martin, who had 29 points, 9 rebounds and 4 assists. The Rockets—who looked like they were wearing McDonald’s All-Americans jerseys—are just 3-7 on the road (12-10 total) and will start a six-game road trip after hosting the Suns in Houston on Friday. The Spurs are 14-9 and currently sit in the sixth slot in the West.

Lob City was out in full force from the opening tip. Literally. And while the Jazz hung tough (this game wouldn’t die, would it?), the Clippers hit 8 free throws in the final 30 seconds to seal the franchise’s first win in Salt Lake City since 2003. I have a feeling this Chris Paul fella is going to help the Clip gang erase a handful of those type records this season. Paul was nothing short of spectacular last night, scoring 34 points to go with 11 assists and 5 boards. By the fourth quarter, he was toying with Jazz defenders, much to the delight of benefactors like DeAndre Jordan here, and Blake Griffin, who turned in a monster night of his own—31 points, 14 rebounds, 3 blocks. The Clippers outrebounded the Jazz 50-35, and got the most important board of the game when CJ Miles intentionally missed the second of a pair of free throws with 1 second remaining, Utah’s last gasp. Reggie Evans pulled down the miss and LAC improved to 13-6 and No. 2 in the West. In fairness, the Jazz played extremely well, never giving up and getting a 27-12-4 line from Al Jefferson, while Miles had 16 off the bench, and forwards Paul Millsap and Derrick Favors scored 14 apiece.

Sorry, but when two teams with a combined 10 wins lose by a combined 80 points on a night with 9 other games, it’s not worth the space to write about each on its own. The only real question here is, Which team got blown out worse? Charlotte lost by more, and looked slightly more awful, but the Raps scored the fewest points of any team last night. Toronto shot only 33 percent from the field vs. the Bobcats’ 34 percent (Portland and Boston both shot better than 52 percent), but then again, Charlotte allowed Jamal Crawford to do this. Our favorite young stars for each squad played poorly in their respective Ls, as Kemba Walker shot just 1-for-11 (4 points) and DeMar Derozan was 3-of-12 with 8 points. The teams on the winning side of these bloodbaths handled business—the Blazers are now 13-9, and Boston got above .500 at 11-10 on the year. Paul Pierce led the C’s with 17 points, 8 assists and 6 rebounds against the Raptors, while the best Portland performance came from Crawford, who scored his 24 points in just 21 minutes off the bench.

Lines of the Night: Plenty of nice lines to choose from—so let’s do it this way: Bronze Medals go to Dwight’s 23 and 18, LBJ’s 40, and Danny Granger’s 36 and 7. Silver Medals go to a trio of point guards: Brandon Jennings put up 31 and 8 dimes to lead Milwaukee past Miami, while Steve Nash turned back the clock and went for 30 points and 10 assists in a blowout win for Phoenix and Russ Westbrook took charge down the stretch against the Mavs (33 points, 6 rebounds, 4 assists). Last night’s Gold Medal goes to Chris Paul—for his 34 points, 11 assists and 5 rebounds, and because he’s awesome.

Dunks of the Night: Dwight Howard on Javale McGee, The King on no one in particular and DeAndre Jordan on the Jazz front line.

Tonight: Six games, and almost all of them have the potential to be great, starting with TNT’s doubleheader of Bulls at Knicks before Nuggets at Clippers, plus Grizzlies-Hawks and a late-night Jazz-Warriors matchup. Enjoy your Thursdays, people. Catch you on the flipside.