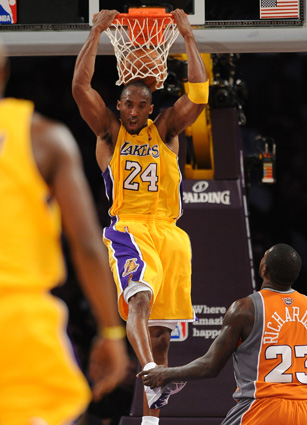 Not sure where the week went but I’m glad the weekend is here. I get to sleep in tomorrow. I can’t even give you words to tell you how happy I am about that.

Know who else gets to sleep in? Byron Scott. Yikes. I feel pretty badly for Scott, because of course, the coach is always the first change that is made when a team struggles out of the gate like this. The look in Byron’s face last week when the Hornets were getting blown out by the Lakers was a look I hadn’t seen from him often. He looked defeated. I kinda felt like this move was only a matter of time, even though it doesn’t feel right.

I just hope things get better for the Hornets. Chris Paul lost his big man in Chandler and now he’s losing his coach. Is he going to gain a team that gives as much as he does on every possession? I do hope so because I can’t handle the damn near 20-assist nights still resulting in losses.

LeBron finished with 34 points and seven assists for the Cavs who were without Delonte West once again. He was with the team in Miami, but was inactive and not on the bench. Mo Williams scored 25 and JJ Hickson added 18. Dwyane Wade led the Heat with 36 points while Michael Beasley added 24 points in the loss. Beasley’s been impressive. Hope it continues. The Cavs looked good down the stretch, impressive on the second night of a back-to-back that involved two big victories over their Eastern Conference rivals. I just love that the Heat are at the top of that list. Love surprises. Also love the way Mario Chalmers is playing.

I felt for Wade last night. Wanted him to get the win on his homecourt with MJ in the house after they had done their big shoe unveiling.

Leave it to LeBron to play the spolier though. Can’t even hate. This was an awesome game to watch. The intensity, the jawing the heart and desire. It’s November and guys are playing like its June. Don’t tell me they don’t care. Love it.

You see Shannon Brown show his ups? It made the blowout that was the Lakers/Suns game a little bearable. Seeing Grant Hill jump up and cheer when Louis Amundson scored to prevent the LA fans from getting free tacos made me smile, too.

Bron switching to number six. Your thoughts? It feels like a nice gesture, but I think he just wants to have both of his numbers retired like Kobe will. Ha. I kid, but really, weird to think about.

As for the Lakers? Foolishly good. That’s how they are playing right now. Phil is dipping into a 10 and 11 man rotation because his team is crushing people even without Pau Gasol. Kobe Bryant in the post is the prettiest thing you will see this season, I’m serious. Also, can Phil start giving Shannon Brown some burn before the fourth quarter? I mean, come on, the guy is going to jump up and fly away if not. Kobe finished with 29 in the game last night as Andrew Bynum had 26 points, 15 rebounds and three blocked shots. The Suns were awful from the floor, shooting 36.5% from the floor while being entirely unable to stop the Lakers who were 57.6% on the evening

Okay, people. Let’s talk ball and let’s all have a fantastic weekend and meet back here Monday morning around 9 a.m. Sound good? Okay great. See you then!