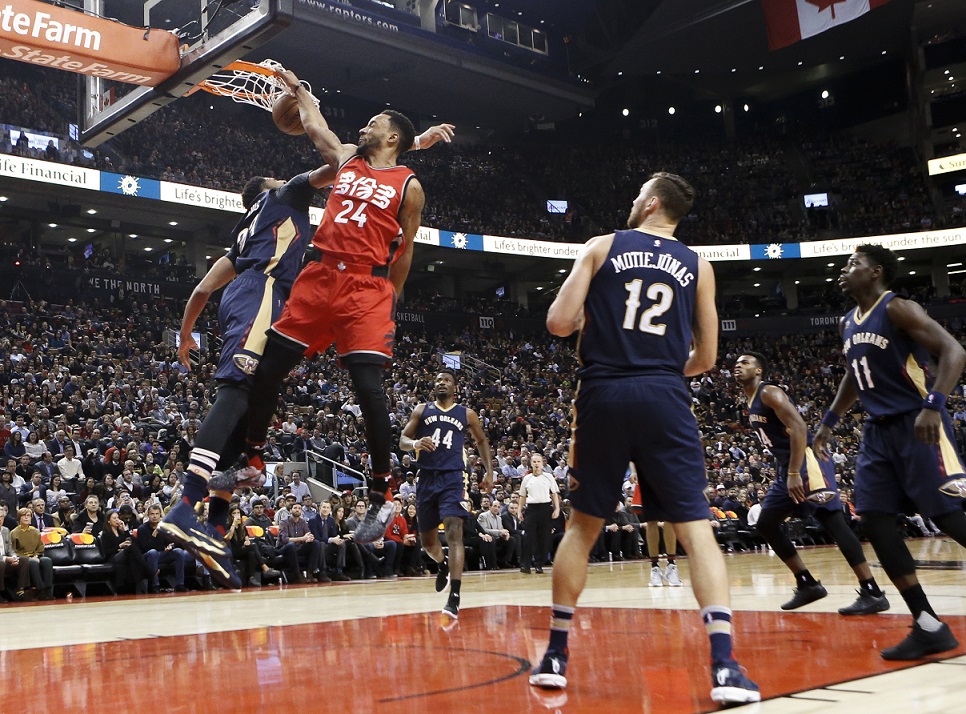 Bradley Beal went off for 28 points and Markieff Morris added 24, as the Wizards completed their 15th-straight home victory. John Wall (15p, 13a) and Marcin Gortat (15p, 10r) each double-doubled.

It’s the same story for the floundering Knicks, who are now 3-7 over their last 10 games. The team’s $72 million man, Joakim Noah, appears to have been leapfrogged in Jeff Hornacek’s rotation by Willy Hernangomez, who recorded an impressive double-double.

This one appeared destined for double-OT after Anthony Davis hit a clutch shot to tie things up at 106. Kyle Lowry had other ideas, however, burying a tough jumper to put Toronto ahead for good.

Jrue Holiday posted a 30-point stat line in the loss, and Anthony Davis grabbed 17 boards with 18 points. AD was on the receiving end of a highlight-reel jam, however, as Norman Powell threw one down over the former Kentucky Wildcat.

James Harden scored a season-low 10 points, Ryan Anderson picked up the slack with 25 points (including six from beyond the arc) and Eric Gordon added 17. Sacramento shot a woeful 34.9% from the field, not able to generate momentum behind DeMarcus Cousins’ 16 points. The more interesting story beyond the court…

Kawhi Leonard and Russell Westbrook engaged in a spirited duel, with San Antonio ultimately pulling away behind 56 second half points. LaMarcus Aldridge scored 25 points in the W, and Steven Adams/Victor Oladipo combined for 31.

It was Dame Time at the Moda Center, as Lillard torched Charlotte for 27 points (his 10th career 20+ point game against the Hornets). Portland has now won four of their last five, bumping Charlotte to the eighth seed of the Eastern Conference. Kemba Walker achieved a milestone in the loss; surpassing Larry Johnson for third place on the Hornets’ all-time scoring list.

As could have been expected, there wasn’t much defense to be found in this match-up of sub-.500 Western Conference teams. The Lakers shot a combined 52.8% from the field, featuring 20+ point performances from Nick Young, D’Angelo Russell, and Lou Williams. Rookie big man Ivica Zubac got in on the action with 17 points; earning props from Nuggets star Nikola Jokic.

“He’s really talented,” Jokic said of Zubac. “He finishes around the rim. He can dunk the ball. He’s a good rim protector. He just needs a couple of years to become an NBA player. He’ll be really good. He has a bright future.”