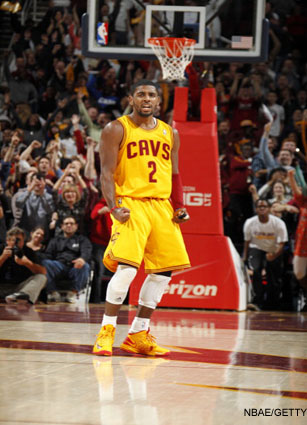 On Saturday night Kyrie Irving was the best player on the floor when Oklahoma City visited Cleveland, the Wizards scored nine points in a quarter and James Harden recorded his first career triple-double.

Cavaliers (14-34) 115, Thunder (35-12) 110
How good is Kyrie Irving? The Cavs trailed 101-100 with three minutes to play when he took over and beat arguably the League’s best team. He scored 13 points in the final 2:51, including an unreal three in the face of Russell Westbrook to put Cleveland up five with under a minute remaining.

The cold-blooded 20-year old finished with 35 on 12-of-23 shooting. He was 3-of-5 from deep and 8-for-8 at the stripe. He only had 3 assists, but I think Cavs fans will forgive him for that. Marreese Speights was great coming off the bench. He made 10-of-15 shots and finished with 21 points and 10 rebounds. He sparked a big Cleveland run that gave them an 8-point lead midway through the fourth quarter. CJ Miles knocked down 4 threes and finished with 16.

Kevin Durant shot just 8-of-21 from the field, but finished with 32 points. He was 13-of-17 from the free throw line and snagged 11 boards. Westbrook shot 12-of-22 for 28 points. Serge Ibaka double-doubled with 18 and 12, and also blocked 4 shots. Kendrick Perkins finished with as many turnovers as rebounds, though he did hand out 5 assists and reject 4 shots.

Kyrie has tunnel vision at times and may be more of a shooting guard trapped in a point guard’s body than pure PG, but, as I argue when the same is said about Westbrook, who cares? He’s an unbelievable player, and I have a feeling we just might see these two teams face off with a title on the line one day.

Bulls (29-18) 93, Hawks (26-20) 76
The Bulls just don’t really care who’s on the floor for them. Last night, they beat the Hawks on the second night of a back-to-back on the road with Joakim Noah, Carlos Boozer and Kirk Hinrich—three starters—not playing. They outscored the Hawks 50-32 in the second half to pull off the impressive win.

Chicago got massive efforts from a few guys. Luol Deng scored 25 points, grabbed 14 rebounds, handed out 5 assists, tallied 4 steals, blocked 2 shots and hit 3 threes in 46 minutes. Taj Gibson started and posted 19 (9/14) and 19. Jimmy Butler, who has been nothing short of awesome when given a chance to play, scored 16 points and totaled 10 boards. Nate Robinson hit 8-of-16 shots on his way to 20 points. They’re as well-coached as any team in the NBA.

New York hit nearly 55 percent of their attempts from the floor and a ridiculous 19-of-43 three-point attempts. JR Smith led the team with 7 triples, and finished with 25 points off the bench. Amar’e Stoudemire was a perfect 10-of-10 overall and scored 21 points in 21 minutes. He’s really finding his groove.

Sacramento lost the rebounding battle by 22 and hit 13 fewer threes than New York. That’s a losing formula if I’ve ever seen one. DeMarcus Cousins played well, scoring 25 points on 14 shots, but his teammates did not. Fellow starters Tyreke Evans (3/10), Isaiah Thomas (3/13), Francisco Garcia (0/3) and John Salmons (1/5) all played miserably.

It’s pretty disappointing to watch the Kings struggle every season despite their young talent. If I was running the show I’d probably flip Tyreke for a decent package rather than give him huge money this summer and build through the draft, but there’s really no clear answer for what they should do. They simultaneously have too many players at every position and not enough players at any position.

James Harden notched his first career triple-double in the win. He scored 21 points on only 11 shots to go along with 11 boards and 11 dimes. Patrick Patterson made 10-of-12 shots and finished with 24. Chandler Parsons hit 3 triples and also dropped 24. Omer Asik finished with 19 points and 15 rebounds.

Kemba Walker was Charlotte’s leading scorer with 24. Granted he’s doing it on a team that is 4-30 in their last 34 games, but Kemba is averaging 18 points (43 percent), nearly 6 assists, 3.5 boards and 2 steals per contest this year. He’s taken big strides since last season, and leads the Bobcats in scoring almost every night. It’s nice to see him succeeding in the pros after an up-and-down rookie campaign.

Timberwolves (18-26) 115, Hornets (15-33) 86
Minnesota outscored New Orleans by 19 in the first quarter, setting the pace for a blowout. Dante Cunningham’s 18 points were enough to lead the T-Wolves. He made all 9 of his shot attempts, and Minnesota made 58.4 percent of their shots overall.

Anthony Davis scored 18 points for the Hornets, but only had 4 rebounds. He’s been a letdown in his rookie season. With nightly averages of 13 points (53 percent), 7.5 boards and 1.8 blocks, the potential for greatness is certainly there. I, for one, thought we’d see it a little sooner, though.

I really like this Bucks team. They’re set in the backcourt with Ellis and Jennings, two guys who can get hot in a flash. They’re tough inside with Sanders’ shot-blocking ability and he and Ilyasova crashing the glass. If the Playoffs started tomorrow, they’d draw New York in the first round. I don’t think they can take them in a best-of-seven, but that backcourt gives them a chance against anybody. At the same time, the backcourt can shoot them out of a game against any team. By the way, can we give this guard duo a nickname? They’re great candidates for one. Jennis? Ellings? Brandonta? Damn. I’ll work on it and get back to you.

Orlando’s leading scorer was Nikola Vucevic, who finished with 20 points, 12 rebounds and 6 assists. Moe Harkless added 19 points, 14 boards and 4 steals. JJ Redick scored 15 with 8 assists. A free agent this summer, he’ll undoubtedly be a coveted player as we get closer to the trade deadline.

Spurs (38-11) 96, Wizards (11-35) 86
The Spurs got a pretty easy win after holding Washington to nine second-quarter points. However, the bigger story is that Tim Duncan left early with an injury. He had to be helped off the court, but was diagnosed with a sprained right ankle and sprained left knee after the game. That’s a lucky break for San Antonio, as The Big Fundamental should be able to return pretty soon.

John Wall scored a game-high 21 for Washington. Martell Webster, who’s quietly becoming a reliable wing player with the Wiz, scored 14 on 9 shots. I’d like to take this time to point out that Jan Vesely was selected ahead of players including Brandon Knight, Kemba Walker, Klay Thompson, Kawhi, Iman Shumpert, MarShon Brooks and Kenneth Faried two years ago. He played six minutes, turned the ball over once and failed to score on Saturday. He’s averaging fewer than 3 points and 3 boards per game this year. It’s never cool to kick a guy while he’s down, but man Vesely sucks.

Damian Lillard played 40 minutes and led the Blazers in scoring with 23. JJ Hickson added 21 and 11, LaMarcus Aldridge posted 18 and 11 and Nicolas Batum just missed a triple-double with 12 points, 10 rebounds and 9 assists. It was a classic team-effort by the Blazers, who are now 17-8 at home.

Their 7-15 road record and lack of scoring off the bench are holding them back from being a legitimate threat in the West. But they’re capable of playing really great basketball, and aren’t far off from being yet another very scary Western Conference club. Seems like a perfect landing spot for Redick to me.

Randy Foye drained 6 threes for Utah, and led the team with 23 points. Paul Millsap added 18 and 8. Much like Portland, the Jazz aren’t nearly as scary on the road as they are playing in front of their fans.

Warriors (30-17) 113, Suns (16-32) 93
Phoenix led by four at halftime before the Warriors pulled away. Golden State outscored Phoenix by 11 and 13 in the third and fourth quarters respectively.

Stephen Curry continued his amazing season for Mark Jackson’s club, knocking down 6-of-10 shots from deep and 11-of-20 overall to finish with 29 points. He had 8 assists and just 2 turnovers in 42 minutes. In a story as miraculous as any we’ve ever seen in sports, Harrison Barnes took more than 3 shots. The rookie was 9-of-11 from the floor, and finished with 21 points and 8 rebounds. David Lee double-doubled with 16 and 12, and Andrew Bogut was effective in 21 minutes.

Michael Beasley had another big game for Phoenix. He dropped 24 off the bench (though he needed 23 shots to get there). He’s been unleashed under new coach Lindsey Hunter, and is playing great. Jared Dudley scored 16 and Goran Dragic tallied 7 assists with just a pair of turnovers to go with his 13 points.