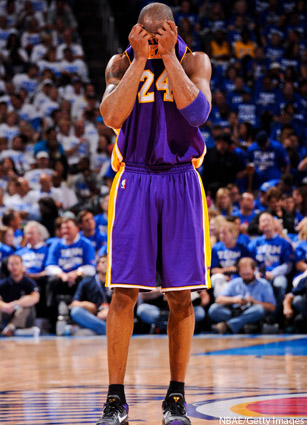 All season, the Boston Celtics have been encapsulated by the doubt and criticisms of what they can’t do. They’ve heard it all—too old, too taxed, too fragile. As recent as last week’s series-clinching victory over the Hawks, the veteran-laden group has been forced to defend itself. The general thinking was (and regardless of a big Game 3 victory, still is) that at some point they would have to surrender in the war against age and attrition. If they would lose, we reveled in that feeling of knowing—the feeling of I told you so, of being right. But if they would win, we’d acknowledge it transiently, registering it as nothing more than a deviation from their inevitable fate.

If Wednesday night was any indication, maybe we—not KG, Rondo, Pierce and Co.—are the ones who need to check ourselves in the mirror. Maybe we’re too jaded to realize that in the NBA age is a number, not a definition or a death sentence. Maybe we don’t realize just how valuable Rajon Rondo really is, or how Paul Pierce and Kevin Garnett still have second and third gears. Maybe we underestimate the weight of cohesion, of flawless execution. Maybe, just maybe, the Celtics will be the ones wearing those Eastern Conference Champions caps, proudly smiling and waving their middle fingers at the world, soaking in that very same feeling of knowing.

Look, being honest with myself, I know there’s no cause for a parade. It was one game against an upstart 8-seed, and if the Celtics are going have any say in who wins the title, games like last night are the expectation. Get beat at home by an inferior team, come right back and punch them in the mouth. But Game 3 was the prototypical Boston Celtics litmus test, perhaps one of too many in an unforgiving lockout-ridden season. It was the type of game the Celtics have built their name on; backs against the wall, with pressure to prove (at least in our minds) that they’ve still got it, pressure to regain homecourt advantage, and ultimately, pressure to restore order.

In Game 3, you could say order was restored. Boston started off slow, missing its first seven shots of the game, and fell behind 33-28 at the end of the first. In the second quarter, though, the Celtics activated their defensive clamps, eliminated the mental mistakes and imposed their will. Led by Garnett (more on him a minute), they went on a 14-2 run that turned the 5-point deficit into a 47-39 lead. Boston clicked on offense, at the same time holding the Sixers scoreless for over 5 minutes. After Lou Williams (13 points) and Thaddeus Young (22 points) briefly ended the scoring drought, the Celtics didn’t relent. They promptly went on a 14-4 run that had them up 60-49 at the half. As ESPN Stats & Info noted, the Celtics didn’t score their 60th point in Game 2 until midway through the fourth quarter. In Game 3, however, they scored 60 points in the first half.

Coming of out the break, Boston didn’t look back. They won the third quarter 27-16, were up by 20 for much of the fourth, and cruised to a lopsided 107-91 victory. Rondo dominated all evening, finishing with 23 points on 9-16 shooting with 14 assists, 6 rebounds and only one turnover in 40 minutes.

Paul Pierce, too, dominated. After a rough start to this series, averaging about 10 points per and battling through a painful knee injury, Pierce had a statement game, showcasing unrivaled energy, crazy bounce in his legs and the angry, Yeah buddy, this is what I do! grin that’s become somewhat of his trademark. The Truth finished with 24 points on 6-17 shooting, and added 12 rebounds and 4 assists. His game was summed up best on two plays in the first quarter, when he rose up through the lane for back-to-back dunks in a 25-second span. Last night, Paul Pierce caught two victims at the rim… ‘nough said.

As for Kevin Garnett, it’s time to start placing his name in the Playoff MVP conversation, especially if factoring in leadership. Garnett continued his abuse, scoring 27 points on 12-17 shooting, grabbing 13 rebounds and dishing 4 assists in 30 minutes. He had 13 points in the second quarter take-over, sinking contested turn-around jumpshots at will and making Elton Brand, Spencer Hawes, Lavoy Allen and the rest of the Sixers frontline look like food. They were the buffet, and Garnett was at the head of the lunch line. With his recent display of brilliance, Garnett has become a microcosm of his team, embarking on a by-any-means mission to restore order.

Ponder this: of the all players still in the Playoffs, only Kobe, LeBron, Durant, Wade, and Westbrook are averaging more points than KG (20.3). And only Andrew Bynum is averaging more rebounds (11). After all these years, the Big Ticket is still doing it, and doing it at a level that none of us thought was possible, at least not consistently. Garnett even drew double teams at several points last night, making it clear that Philly has no answer for him. And if Rondo and Pierce stay hot, it’s also clear this series could get out of hand quickly.

The question, of course, is whether Boston can sustain this level of play. If they are as engaged as they were on Wednesday, they can beat anybody in the League, and certainly dispose of the seemingly confused Sixers. If they come out flat in Game 4, well, then I guess we’re in for another litmus test.

Steve Blake floated to the corner and Metta World Peace couldn’t resist. He was open. And with Kobe Bryant cutting from the inbounds play about 25 feet away with a defender draped on him, the ball came to Blake, who launched a 3-pointer with less than six seconds left in the game that bounced off the back iron and sealed an eventual 77-75 win for OKC in Game 2. Bryant was visibly upset about not getting the ball but it would have been a difficult pass for MWP to make.

The Lakers struggled offensively down the stretch, failing to score on their final six possessions of the game’s final two minutes. Up 75-70, Bryant had a pass stolen away by Kevin Durant, who raced down the court for a layup to cut the lead to 3. Bryant then bricked a turnaround that led to a bucket by James Harden on the other end. With the Lakers up 75-74, Bryant missed a 3-point attempt and Durant gave the Thunder the lead on the other end after driving to the right side for an easy floater. With 18 seconds left, there was plenty of time for the Lakers to get a last shot but as Kobe dribbled out the clock for a final look, the Thunder had a foul to give and guard Thabo Sefolosha made a smart play by fouling Bryant with 5.7 seconds left as he tried to drive past him.

That forced the Lakers into their scattered final inbounds play where Russell Westbrook lost sight of Blake in the corner. “What they did the last few minutes there, they just made gambles, “Kobe said. “It’s not something we’re accustomed to seeing, just flat out risks defensively. Durant did it and got a steal, Westbrook did it and caused a turnover. It was a little unconventional.”

Durant was sensational in the clutch and put together a nice all-around game, finishing with 22 points, 7 rebounds, 5 assists and 2 steals. “This team is tough,” Durant said, sitting alongside Westbrook at the postgame presser. “Our DNA is always to keep pressing and to keep our composure.”

The Lakers did a much better job defending Westbrook and the Thunder’s pick-and-roll, keeping their bigs out to contest. They played the Thunder tough throughout the game, putting together a much better showing than their bleak performance in Game 1, but they were dismal down the stretch. “The last two minutes we didn’t do a good job executing offensively or defensively,” Lakers coach Mike Brown said. “We felt like we let one slip away.”

The Lakers were led by Bryant and Andrew Bynum, each posting 20 points, while Pau Gasol added 14 points and 11 rebounds. The struggles for point guard Ramon Sessions continued—he managed only 2 points and zero assists in Game 2.

Despite the stinging loss, Bryant remained positive. “The biggest thing for us is that we found some things out defensively that we think are effective,” he said. “They did a great job, it was a great comeback by them. They got themselves a gritty win and not it’s on us to go back home and defend our home court.”