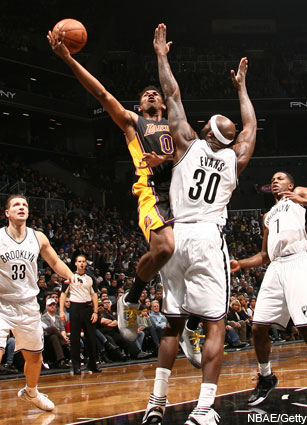 After jumping out to a 27 point lead, Los Angeles nearly collapsed in Brooklyn against the sputtering Nets. With the win, the Lakers got to 8-8 on the season, while the Nets, who just can’t seem to get anything going, fell to 4-11.

The Lakers were lifted by Pau Gasol, who went for 21 points and 8 boards against Brooklyn’s frontline. However, the big scorer on the night for L.A. was Nick Young. In one of the most Swaggy P games of the season, Young dropped 26 points, grabbed 1 board, dished out 1 assist, had 1 steal and blocked one shot.

As for the Nets, five guys put up double digit scoring—Joe Johnson had 18, Mirza Teletovic had 17, Alan Anderson and Andray Blatche had 14 and Paul Pierce dropped 12. However, that wasn’t enough…nor was Jason Kidd’s attempt to get a free time out by telling Tyshawn Taylor to bump into him so he’d spill his drink.

LeBron James was his usual self last night, shredding his old team for 28 points, 8 boards, 8 assists and 3 steals in front of fans who (predictably) want him back this summer. He was supported by Dwyane Wade, who went for 22 points on 10-14 shooting, and Michael Beasley, who slapped 17 points and 9 boards on the Cavs.

By his standards, Kyrie Irving struggled. Cleveland’s star guard went for 16 points and 3 assists on 6-19 shooting with 4 turnovers. Luckily for the Cavs, Dion Waiters had one of his best games of the year, tying his season high 24 points on 7-14 shooting while grabbing 6 boards. Maybe he should be mentioned in trade talks more often?

For the 76ers, Evan Turner messed around and (almost) got a triple-double, dropping 17 points to go along with 11 boards and 8 dimes. Thad Young had an absurd 26 points and 8 rebounds in 28 minutes of play, while Michael Carter-Williams put up 23 points with 4 rebounds, 4 steals and 3 assists.

Indiana can’t stop winning. This marks the fifth straight win for the Eastern Conference leaders, who have been riding a stout defense — which held Charlotte to under 20 points in two quarters — and Paul George. Indy’s star had a relatively quiet game, putting up 15 points, 5 boards and 4 assists, but was picked up by double-doubles from Roy Hibbert and Lance Stephenson — who had 14 points and 10 boards and 15 points and 10 boards, respectively — and an 18 point performance by CJ Watson.

Al Jefferson had 16 points and 9 boards for the Bobcats, while Kemba Walker scored 15 and Gerald Henderson scored 10. However, Walker and Henderson combined to shoot 6-32. Ouch.

Chicago dropped Detroit to pick up its first win since Derrick Rose went down. The Bulls were down by two at the half, but throttled the Pistons during the second half, 48-26.

Luol Deng and Taj Gibson came up big for Tom Thibodeau. Deng dropped 27 with 6 boards and 5 assists, while Gibson scored 23 points and ripped down 8 boards. As for the Pistons, it was a rough night offensively, but Rodney Stuckey led the way with 25 points.

Memphis used a strong first quarter, one where they outscored Boston 27-13, to propel themselves to their first win and three times.

Five Grizzlies players put up double digit scoring: Jerryd Bayless led the way with 22, Mike Conley had 14, Zach Randolph had 13, Tony Allen had 12 and Ed Davis had 11. The win was the fifth straight road victory for Dave Joerger and Co.

The loss dopped Boston to 2-7 in its last nine outings and snapped a two game winning streak. It wasn’t all bad for the Celtics, as Jeff Green and Jared Sullinger put up 26 points and 7 boards and 23 points and 12 boards, respectively.

Portland lost its first game in 12 games, partly because of the play of Goran Dragic. Phoenix’s guard had a monster night, dropping 31 on 10-18 shooting and 4-5 shooting from downtown, along with 10 assists and 5 rebounds. The Suns also got major contributions from Channing Frye, who had 25 points on 10-12 shooting and 9 boards, and the Morris twins, who combined to drop 34.

LaMarcus Aldridge continues to play at an All-Star level, putting up 24 points on 10-18 shooting. However, Rip City’s other star struggled, as Damian Lillard had 16 points and an assist on the night.

Despite a late push by the Warriors, who outscored Dallas by seven in the final period, the Mavericks were able to come out on top despite a subpar performance by Monta Ellis, who scored 4 points on 2-16 shooting. Luckily for Dallas, six players dropped at least 11 points, led by Dirk Nowitzki, who scored a team-high 22.

For Golden State, Steph Curry had himself a ballgame. He showcased his usual smooth shooting, going 9-19 from the field and 6-10 from downtown en route to a 29 point performance. Outside of scoring, Curry had 8 dimes and 4 boards. Also for the Warriors, David Lee had 20 point and 12 boards, while Klay Thompson had 20 and 10.

Coming into this game, the Spurs were riding an 11 game winning streak and hadn’t lost since November 2. Despite an off night for Russell Westbrook (6 points on 2-16 shooting with 8 assists), Kevin Durant and Co. stepped up. Durant put up 24 points and 13 rebounds, Reggie Jackson had 23 points and Serge Ibaka had 17 points, 11 boards and 5 blocks.

San Antonio led at the half, but couldn’t close Oklahoma City out. Five Spurs scored double digit points, led by Tony Parker, who had 16 points and 7 dimes.

Minnesota made a late push, and actually cut Denver’s lead to one point with 3:57 remaining in the game, but the Nuggets’ insane balance was too much for the Timberwolves. The Nuggets shot 51 percent from the field, and eight Denver players scored in double digits with Ty Lawson’s 23 leading the way.

The Timberwolves’ frontline of Kevin Love and Nikola Pekovic did their usual damage, combining for 40 points and 35 boards. Kevin Martin lit up Denver for 29, while Ricky Rubio had 17 points and 11 dimes.

An O.J. Mayo three with six seconds left sent the game to overtime, but Washington ran over Milwaukee in overtime, outscoring the Bucks 13-5 in the game’s final frame.

Washington’s high man was Marcin Gortat, who had 25 points and 8 boards, while the best point guard in the NBA John Wall put up 19 points with 6 assists and five steals. For Milwaukee, Mayo led the way with 21 points and 7 rebounds.

Houston is quietly one of the hottest teams in the L, winning three in a row and six of their last seven. With James Harden sidelined and Dwight Howard only playing 26 minutes, several Rockets stepped up, including Aaron Brooks and Francisco Garcia, both of whom dropped 21 points.

As for Atlanta, this was their third loss in a row. Kyle Korver was out with a rib injury, and Cartier Martin and John Jenkins stepped up, going a combined 7-13 from downtown for 27 total points. Paul Millsap led the way with 16 points.

The big news was that Chris Paul left the game in the third quarter due to a hamstring injury. He had 15 points, 7 assists and 5 rebounds by that point. Despite this, the Clippers were able to send the Knicks to their seventh straight loss behind 15 points and 13 rebounds from Blake Griffin.

Carmelo Anthony led the way for the Knicks with 27 points on 9-23 shooting with 9 rebounds, and Andrea Bargnani had 20 points and 10 boards, but it wasn’t enough. The Knicks are now 3-11 on the season and haven’t won a game since November 13.